Fancy being a member of Iraq's cabinet? Just apply online

In a country of 8 percent unemployment rate, Iraqis are encouraged to apply online for ministerial jobs for the upcoming cabinet Iraq's new prime minister on Tuesday launched a government website allowing Iraqis to apply for ministerial jobs online, in an unprecedented move in the Arab states. Several Iraqis have already announced their applications on social media.

"Whomsoever finds he has the efficiency, expertise, specialisation and practical experience, and would like to nominate himself to a ministerial position, can do that through the website," the statement said.

Today I applied as an independent applicant for the position of Minister of Youth and Sport in the @AdilAbdAlMahdi cabinet!

Applicants must also submit evidence to prove that they are legally able to hold a public position, according to the Iraqi constitution and laws.

The cabinet website started receiving applications on Tuesday at 8am and will close down on Thursday, 11 October at 4pm.

Mahdi was appointed as Iraq's prime minister after major political parties in the country agreed to nominate his name to the position.

He has a tight deadline of 30 days to form an Iraqi cabinet after the president, Barham Salih, asked him to form it on 2 October.

If Mahdi fails by 1 November to secure a cabinet, he has to step down and another Iraqi figure will be appointed to form a government.

Iraqis took it to social media to welcome Mahdi's move to receive online applications for his cabinet positions, in a country in which 8.17 percent of its 37.2 million population are unemployed.

Iraqis can apply for 19 ministerial jobs including the five core ministries in Iraq which are defence, foreign, interior, finance and oil ministries.

Human rights activist Salam Mustafa announced on Twitter that he applied as "an independent applicant" to be the minister of youth and sport in Iraq, while Dalia Al-Aqidi, a TV anchor and writer, was the first Iraqi female to apply through the website.

She posted a picture on Twitter while she was filling her personal details section in the application.

[Translation: The position of the government spokesperson is not listed. Good luck for everyone.]

He or she has also to mention their qualifications, work experience, and to write a sort of "vision statement" of how they would solve the ministry problems and what are the best characteristics a successful leader should have. 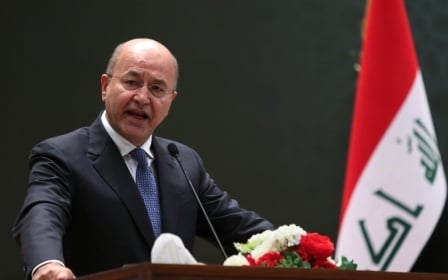