Officials also said that Iraqi forces had been ordered not to call in air support unless they found themselves in a critical situation after scores of people were reported to have been killed in a single air strike in the New Mosul neighbourhood on 17 March.

Local officials in Mosul have accused Iraqi security forces and the the US-led international coalition against IS of using excessive force and killing hundreds of residents in western Mosul by shelling their houses during the last few weeks.

The civil defence team responsible for Mosul told MEE that they had recovered about 230 bodies during the past 11 days in the neighbourhoods of New Mosul, Wadi Hajar and Al-Ma'amoun and were still looking for more victims.

“The casualties among the civilians [and the damage to] properties are very big. Daesh [IS] are taking advantage of everything around them," Ammar, an Iraqi military captain who declined to give his full name, told MEE.

"They gather people in a trapped building where a sniper or a group of militants are stationed on the roof, and lure the pilot to bomb it by shooting at him.”

Zuhair al-Jobori, a member of Mosul's local council, told MEE that witnesses’ testimonies suggested that those tactics had contributed to the high death toll caused by the 17 March air strike. He said that officials were investigating unverified reports that as many as 600 people had been killed by air strikes in New Mosul.

Jobori said that witnesses described how IS militants forced dozens of residents from western Mosul into seven houses in al-Ressala neighbourhood and then deployed an explosives-laden oil tanker and car bombs outside and positioned snipers on roofs as Iraqi special forces advanced into New Mosul.

“Based on the testimonies of the survivors, we believe that rockets fired by a jet in response to the sniper shooting had bombed the tanker and caused huge damage," said Jobori.

Jobori said that the figure of about 600 deaths was based on daily reports from relatives who believed that family members may have been killed in air strikes in IS-held neighbourhoods. 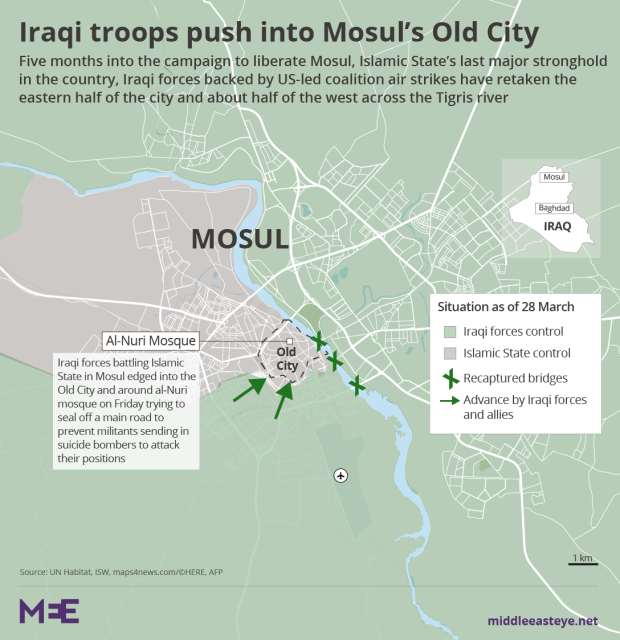 But another official said the number was hard to verify because those filing the reports were not in the area at the time and so could not be certain of the location of their relatives.

“Daesh militants have been forcing people to relocate and moving them from one place to another, so how we can be sure that they were there?" a member of a local investigation committee told MEE.

"Unfortunately, we have been receiving so many reports of people killed because of the air strikes, but these reports mostly came from areas still held by Daesh. We cannot ignore them but also we cannot say they are true."

Concerns about civilian casualties, as well as complaints of excessive force being used by Iraqi security forces and the coalition, have resulted in a change in tactics in western Mosul, according to Iraqi officials. Measures have also been introduced to limit air strikes to situations of critical necessity.

"They [the Iraqi and the international jets] are above our heads all the time, but our new instructions state to not rely on them or call them unless we face a critical situation," an Iraqi military commander, speaking on condition of anonymity, told MEE.

The commander said that increased coordination between Iraqi forces and the coalition in recent months had resulted in air strikes hitting targets within seconds of being called in by ground forces.

Iraqi commanders were “allowed to directly contact the air strikes cell” to ask for a target to be bombed, with the response coming “in just 20 seconds sometimes”, he said.

“They were responding to our requests immediately after we provide the coordinates. That was really helpful and reassuring for our troops," the commander said, adding that the greatest support had been provided by French, rather than US, jets.

The coalition does not publish data identifying which air force carried out specific air strikes.

An Iraqi military commander told MEE that the greatest support had been provided by French, rather than US, jets

According to a French defence ministry statement dated 22 March, French jets carried out 11 air strikes against IS defensive positions inside Mosul in support of Iraqi ground forces in the week to 21 March.

Several Iraqi commanders involved in operations in western Mosul told MEE that the advance of Iraqi troops had been halted for two days at the start of the week because of concerns about mounting civilian casualties.

These arrangements included halting fighting, air strikes and the advance of troops into the old city and central western Mosul because of the area’s old buildings and narrow alleyways.

“These conditions would double the impact of any military action and raise the possibility of causing mass deaths in this area," said the security official.

Other measures include restricting the role of Iraqi federal police units - which have been accused of using excessive fire since their participation in the battle to recapture Fallujah last year - and cleaning up recaptured areas to remove booby traps and roadside bombs around the old city.

“Federal police units are stopped. They are not allowed to progress anymore," the official said.

But Sabah Nuri, a spokesman for Iraqi counter-terrorism forces, told MEE that the rules of engagement for both Iraqi and international forces had not been changed. He said there had been no increase in the number of air strikes being carried out.

“Actually, the number of air strikes carried out in eastern Mosul was much higher,” he said.

Iraqi authorities and coalition commanders have denied using excessive force in western Mosul and both have launched investigations into reports of their involvement in causing mass civilian casualties.

Lieutenant General Steve Townsend, the senior US soldier in Iraq, told reporters on Tuesday there was a “fair chance” that American forces had been involved in the 17 March air strike in New Mosul.

“My initial assessment is that we probably had a role in these casualties,” he said. “If we did it - and I'd say there is at least a fair chance we did - it was an unintentional accident of war.“ 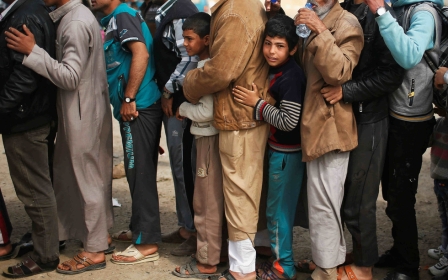