Fighting near Tripoli with Libya rivals in crunch talks Fighters from the Fajr Libya , an alliance of militias, take cover during clashes with an opposing militia in Bir al-Ghanam (AFP)
By
MEE and agencies

UN envoy to Libya Bernardino Leon urged rival Libyan lawmakers to try to nail down a political agreement by the weekend as they began three days of "decisive" talks on Friday.

As the talks got under way in Morocco, the Tobruk-based House of Representatives (HoR) said forces loyal to them had launched an offensive to "liberate" Tripoli, seized by the Misratan-led alliance of Libya Dawn last summer.

"The government salutes the operations launched by army units south of Tripoli which constitute the start of an offensive to liberate Tripoli and its suburbs," it said on Facebook.

The announcement came as Libya Dawn said it had clashed with a group of gunmen who infiltrated Aziziya, 35 kilometres (22 miles) south of Tripoli, and captured a number of them.

After its summer takeover Libya Dawn installed a government in Tripoli opposed to the Western-backed HoR based in the east.

Leon deplored the latest clashes as "unacceptable" and posing "a serious threat" to reaching a political agreement at the Skhirat talks, near Rabat.

"The United Nations wants to call on both political actors and military actors to stop such actions," he said.

Leon said talks over the next three days will focus on security arrangements, the creation of a national unity government and confidence-building measures.

"By Sunday, we would like to have these three documents ready and if possible, published, as already agreed (as) part of what will be a final package," Leon said.

Unrest in Libya and a deadly attack on Wednesday in neighbouring Tunisia claimed by the Islamic State (IS) group that killed 20 tourists and a police officer "is another sign of alarm", he said.

Tunisia said the gunmen who carried out the attack on the National Bardo Museum were trained at a militant camp in Libya.

"There is a sense of urgency and we believe this should be a decisive round," Leon said, urging both sides to work in a "spirit of compromise".

The UN-mediated talks, between the Tobruk-based parliament and the Libya Dawn backed General National Congress (GNC) seated in Tripoli, were delayed for several days to allow both sides to prepare, he said.

Leon has struggled to bring the rival parliaments closer together, with Morocco hosting a first round of talks on 6 March.

On Friday, he warned that failure to strike a deal could spell danger for Libya and the region.

"It’s not only about Libya but about the region, the wider region. But Libya is today a critical case. So, something has to be done regarding terrorism," he said.

"And parties should be aware that this is the decisive movement and if they are not able to take the right decisions Libya will go back to war again and we know this is a war that nobody can win."

GNC delegation chief Mohammed Saleh al-Makhzoum, at the outset of the talks, renewed his side's call for direct negotiations.

"We hold out our hand to the other side for a direct dialogue. The Libyan question is not easy, and we need a comprehensive solution providing guarantees to the two sides," he told reporters.

His counterpart from Tobruk, Mohamed Ali Chouaib, insisted on the legitimacy of the parliament elected last June.

"There is no question of discussing legitimacy. Parliament was elected in free elections held according to international norms," he said.

Libya has been plagued by chaos since the end of its 2011 revolt, with heavily armed militias battling for control of its cities and oil wealth and the rival parliaments and their governments vying for power.

The political vacuum has allowed militant groups to gain a toehold in the vast, oil-rich North African country.

IS has claimed several attacks in Libya, including a January assault on a luxury Tripoli hotel that killed nine people, five of them foreigners, and the beheading of 21 Coptic Christians, mostly Egyptians.

More than 45,000 Egyptians have fled Libya since the beheadings were announced last month in an online video, state media and an official said on Friday in Cairo. 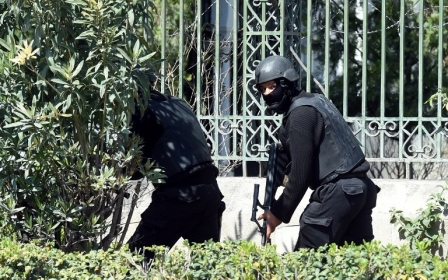 Libya Crisis
Libya’s Misrata faces another enemy, and another battlefront