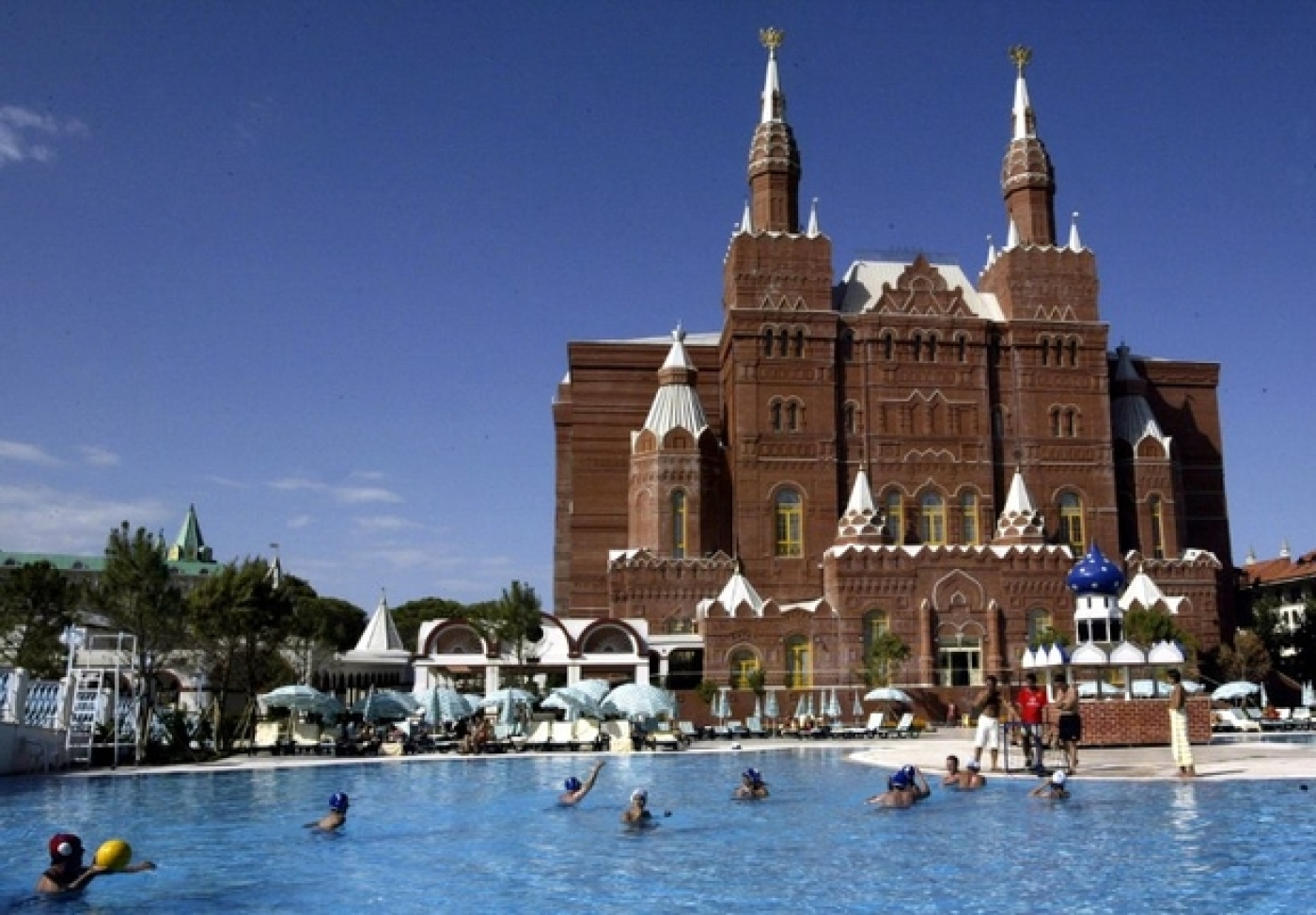 Tourists swim in front of replica of Moscow History Museum at Kremlin Palace Hotel in Antalya, before the ban (AFP)
By
MEE and agencies

The first Russian flight carrying package tourists to Turkey since a diplomatic crisis erupted eight months ago landed in the Turkish Mediterranean resort of Antalya.

The Rossiya Airlines plane touched down at Antalya's international airport on Saturday morning, after President Vladimir Putin last month officially lifted restrictions on tourism to Turkey as part of a normalisation of ties.

Airport officials greeted the passengers with flowers and a cocktail party after the flight from Moscow landed, according to Turkey's Anadolu news agency.

Russia had banned the sale of agency tours to Turkey as retaliation for Ankara shooting down a Russian warplane last November on the Syrian border.

The ban dealt a crushing blow to the Turkish tourism industry, which is hugely reliant on Russian tourists especially on its Mediterranean coast.

In May, overall foreign visitor numbers to Turkey plunged 35 percent but the number of Russians visiting fell 92 percent from a year earlier, official statistics indicated.

According to Antalya airport, the number of Russian tourists had dropped 99 percent in June along with a general decline in tourism.

Visitors have reported seeing luxury resorts around Antalya tailor-made for Russians - including a replica of Moscow's St Basil's Cathedral by a swimming pool in one hotel - to be near deserted.

However, Putin on 30 June lifted the ban on the sale of tours and ordered charter flights from Russia to Turkey to resume

His move came after President Recep Tayyip Erdogan sent a letter to Putin that Moscow said contained an apology for the downing of the jet.

Analysts say that Ankara was keen to repair its relations with Moscow after the crisis with a key regional neighbour left Turkey dangerously isolated on the international stage.

But he said there needed to be "special attention on the need for additional measures to enhance transport security and prevent flights to regions with a high terrorist threat".

Underlining the importance of Saturday's flight, a special ceremony was laid on for the new arrivals with the surprised passengers handed flowers after stepping off the plane and serenaded with music.

The deputy governor of Antalya, Mehmet Yavuz, said it was better to describe the arrival as a "charter-like flight" as while Moscow had allowed the selling of tours, it was still to give formal approval for charter flights.

"As you know, a charter flight is one that has been rented by a tourist company. This was a normal airline flight," said Yavuz, who is responsible for the airport.

A spokesperson for Rossiya Airlines in Moscow said the flight was the "first of the 2016 summer season" by the airline from Moscow to Antalya and had been performed with the full cooperation of the Turkish authorities.

The head of Antalya's airport, Osman Serdar, acknowledged the tourist season had started in a "troubled way" and was happy to see the Russians arriving.

"We are seeing the first group of Russian tourists arrive. This will continue to increase and we definitely don't want to have these kinds of troubles again," he told reporters in Antalya.

The Turkish tourism industry is expected to be dealt another blow by tourists staying away following the 28 June triple suicide attack blamed on militants at Ataturk International Airport in Istanbul that killed 47 people.

Aside from the Russian crisis, the tourism industry had already been dealt repeated blows by a string of attacks in Turkey blamed on Islamic State and Kurdish militants.