Tens of thousands took to the streets last night, causing some to say that the third intifada has begun 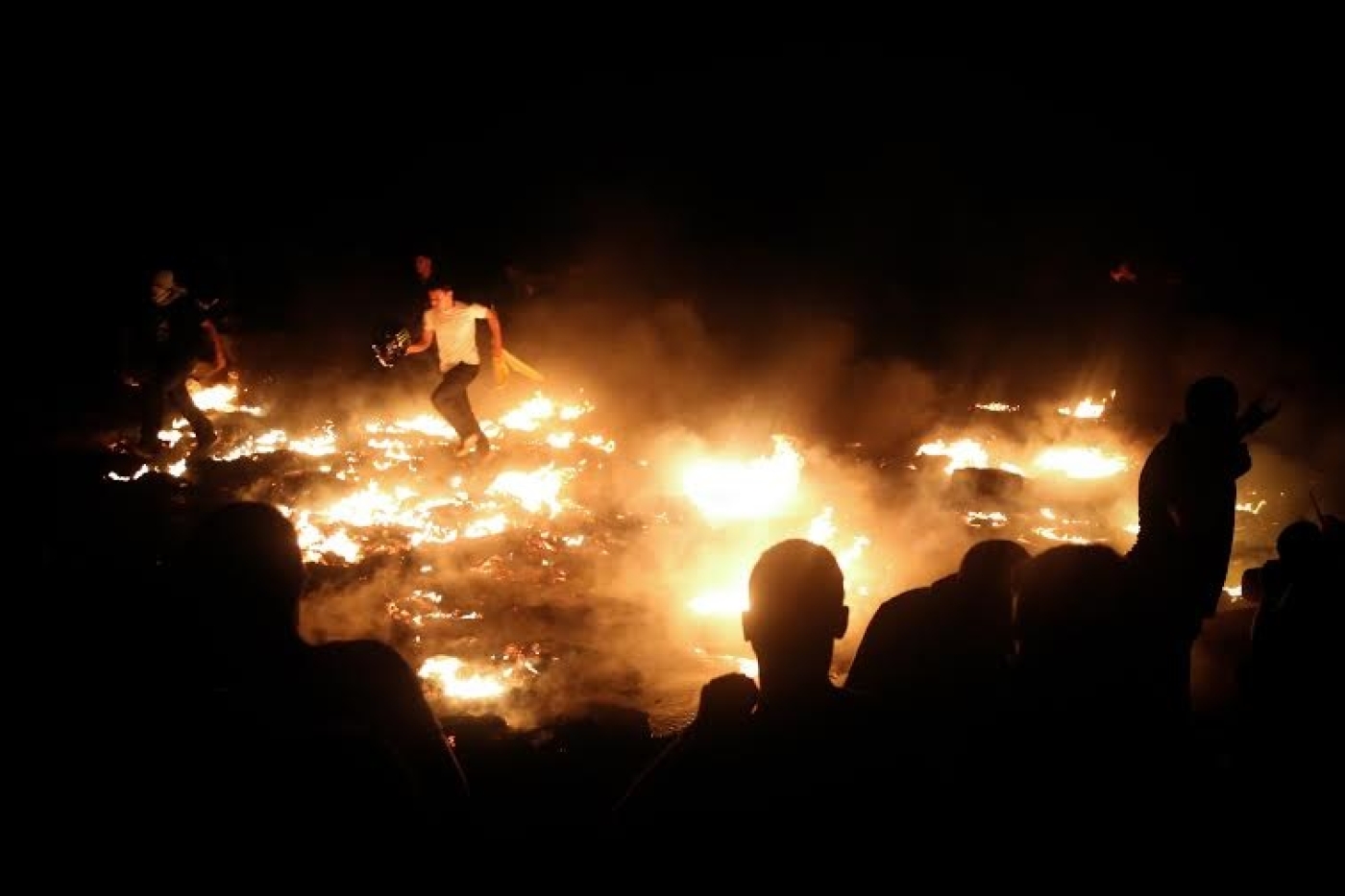 RAMALLAH and BETHLEHEM, West Bank - Loud explosions and bursts of colour ignited over protestor’s in Ramallah as bullets whizzed through groups, injuring over 150, and killing two.

The final death toll may yet rise, with five people said to be in critical condition and some unconfirmed reports suggesting that four people could have been killed.

While people across Palestine gathered in celebration of Layla Al Qadder, or night of destiny, the enormous turnouts were fueled by the quickly rising death tolls in Gaza. Depending on the source, anywhere between 30,000 to 50,000 people joined in Ramallah’s march. Most media sources agree the protests were the biggest since the second intifada in 2005, although some say they could even be as big as the protests during the first intifada in 1987.

Alaa Jadaa, a Ramallah resident of who attended the Thursday demonstration, said he was sure that we are now seeing the start of the third intifada.

“The protest began at al-Manara [Ramallah’s city center] and we marched to Qalandiya Checkpoint, I am sure people will look back and say the third intifada was started in Gaza first and then look at us in Qalandiya,” Jadaa told Middle East Eye.

“I think this is going to be a massive intifada actually. It was really crazy last night, there was a guy from Barcelona who asked me if I had ever seen a demonstration like this and I said not for years. But still, this one is bigger than I have ever seen.”

As the crowds began to gather, they chanted anti-Israel and pro-Gaza slogans. Quickly all the protesters were packed together and there was little room to move. A relatively small group of some 200 Palestinians toward the front of the protests began throwing rocks, molotov cocktails and fireworks. It wasn’t long before things turned bloody and the Israeli military at the Qalandiya checkpoint responded by firing live ammunition and tear gas.

While it was easy to spot the 200 or so rock-throwers, people in the bulk of the otherwise peaceful crowd claim they were also hit in the exchange.

Ramallah Government Hospital was overrun with wounded, the floors streaked with blood as gunshot victims continued to amass into the waiting room. The operating rooms quickly filled to capacity and the Palestinian Authority police was forced to cordon off the outside the emergency entrance to allow those with the most serious injuries to enter the crowded and chaotic hospital.

Unlike previous protests, where police actively attempted to stop protests in Ramallah and across the West Bank, the mood and their response to the protesters was more conciliatory.

“A lot got injured, really badly injured, maybe four or five got killed, we don’t know yet,” Jadaa said. “The other people were cheering for the stone throwers, standing at the side and far back, they weren’t throwing anything, they were trying to stay away from the fires and the fighting.”

In recent weeks, all major cities in the occupied territory have held demonstrations,as Gaza has been bombarded from land, sea, and air by the Israeli offensive .

Some of these protests have erred on the side of caution and have striven to be inventive. The village of Bil’in held a demonstration where residents dressed up as Gazans injured in Israeli airstrikes. Elsewhere, the sight of fake coffins has become a familiar sight.

Other cities, however, from Hebron to Bethlehem, and on Thursday night Ramallah, have erupted into flames, with widespread clashes and injuries reported.

“I think the intifada will take place all over Palestine, all over the place, it will be everywhere, Ramallah, Nablus, Tulkarem, Bethlehem, Jenin, Jerusalem, Gaza,” said Jadaa.

“When everyone was throwing stones at Qalandiya, I heard the Palestinians that were living in Jerusalem were also starting to protest, it was everywhere. Everyone knows we need to unite to defeat this enemy, we need to unite.” 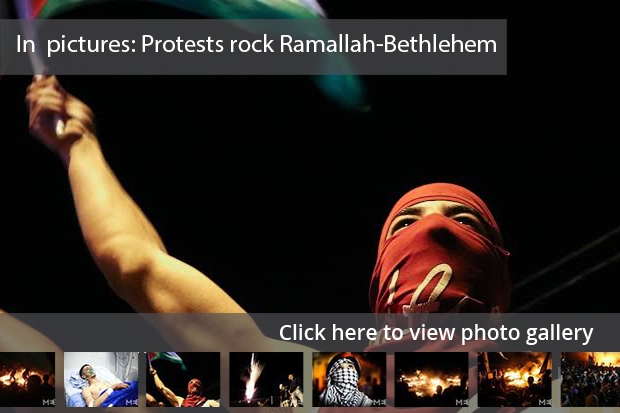 Bethlehem is more often than not a quiet tourist city, best known as the birthplace of Christ. But in recent weeks, souvenir shops have had to close early and hotels have sealed their doors and windows to keep out the teargas, as the scene outside explode into intense clashes.

Most mornings, the ordinarily clean streets smell rancid as the chemical skunk water used by the military to subdue protestors stubbornly lingers.

Confrontations between Palestinian protesters and the Israeli military have become a daily, often violent, occurrence. The city has broken into protests every night since the discovery of 16-year-old Mohammed Abu Khdeir’s burned body in Jerusalem on 2 July, and they have only intensified once the war in Gaza began to rage.

Like Ramallah’s protest at Qalandiya, Bethlehem’s protests take place at a gated checkpoint in Israel’s Separation Wall, the eight-meter concrete structure that cuts through the historic city. Protestors march down Bethlehem’s main street and are met by a flurry of teargas and sporadic live fire. Most nights three or more protesters are taken to the nearby Beit Jala hospital with bullet wounds.

Numbers tend to fluctuate - some nights see just 200 residents show up while other nights bring more than a 1,000 protesters to the streets – but the mood remains the same and residents are proud to say they are staying strong and flying the flag for Gaza in the occupied West Bank. Bethlehemites proudly state that their city has been the only city to face the IDF every night, continuously, for over three weeks, despite the increased aggressiveness of the army as each night passes.

“Our protests here in Bethlehem and in all of Palestine are not only for Gaza, it is for all of the people in Palestine, for all Palestine. We have to do something, even if that something is so small, at least you are doing something and that is important,” Abbas said.

While the deaths and injuries pale into insignificance when compared to the ever mounting death toll in Gaza, people here feel they are at least doing their part to try and highlight the plight of fellow Palestinians felt elsewhere.

In Bethlehem, Abbas, like Jadaa, also believes that the new waves of clashes for Gaza, particularly in Ramallah, have sparked the next intifada.

“This is the third intifada, it has started, from tonight it started. And this is good for Palestine,” Abbas said. “If no intifada then there is no Palestine, if an intifada comes then people will talk about Palestine again, they will know Palestine again, this is why it is good and why it has to be started.”

For the first few weeks, the protests usually sparked a pretty heavy Israeli response, with soldiers often pouring out of the wall to clash with demonstrators below. Over the last week, however, the Israelis have begun relying more on the PA police which according to the Oslo peace accords is required to assist the Israelis in security operations.

The PA riot police, which  used to turn up sporadically,  is now ever present. It  tries to prevent protesters from reaching the Israeli bases and forms a line, batons in hand, to shield Israeli security forces from their own citizens. Despite these tactics, the PA has proved largely unable to keep the peace and quell the protests in Bethlehem and Ramallah.

Until now this has enflamed simmering tensions that have long festered beneath the more vocal and often cited calls for solidarity and an end to Israeli abuses.

Jadaa explains that he is convinced that the PA is working against the Palestinians, and believes that more and more people are waking up to this reality, which in turn is helping to create a renewed and strengthened sense of Palestinian unity.

“I don’t even want to mention his name [PA President Mahmoud Abbas] - he is a disgrace - the Israelis they are manipulating everything, they are playing a game and they do what they want, and he [Mahmoud Abbas] is part of that,” Jadaa said.

The PA’s only hope, he continues, is to align with the Palestinian people during this time of uprising, he adds.

Although the PA has collaborated on security matters in the occupied West Bank with Israel in the past, the authority has now called for a “day of rage” to take place after midday Friday prayer.

The PA's true intentions remain unknown however, with many protesters on the streets believing that they are simply trying to attach themselves to a popular locally-led movement that started without their help and backing. With Jerusalem and the occupied territories on edge, both the PA and protesters are now waiting to see how many people will turn out, and how fierce the crackdown will be.