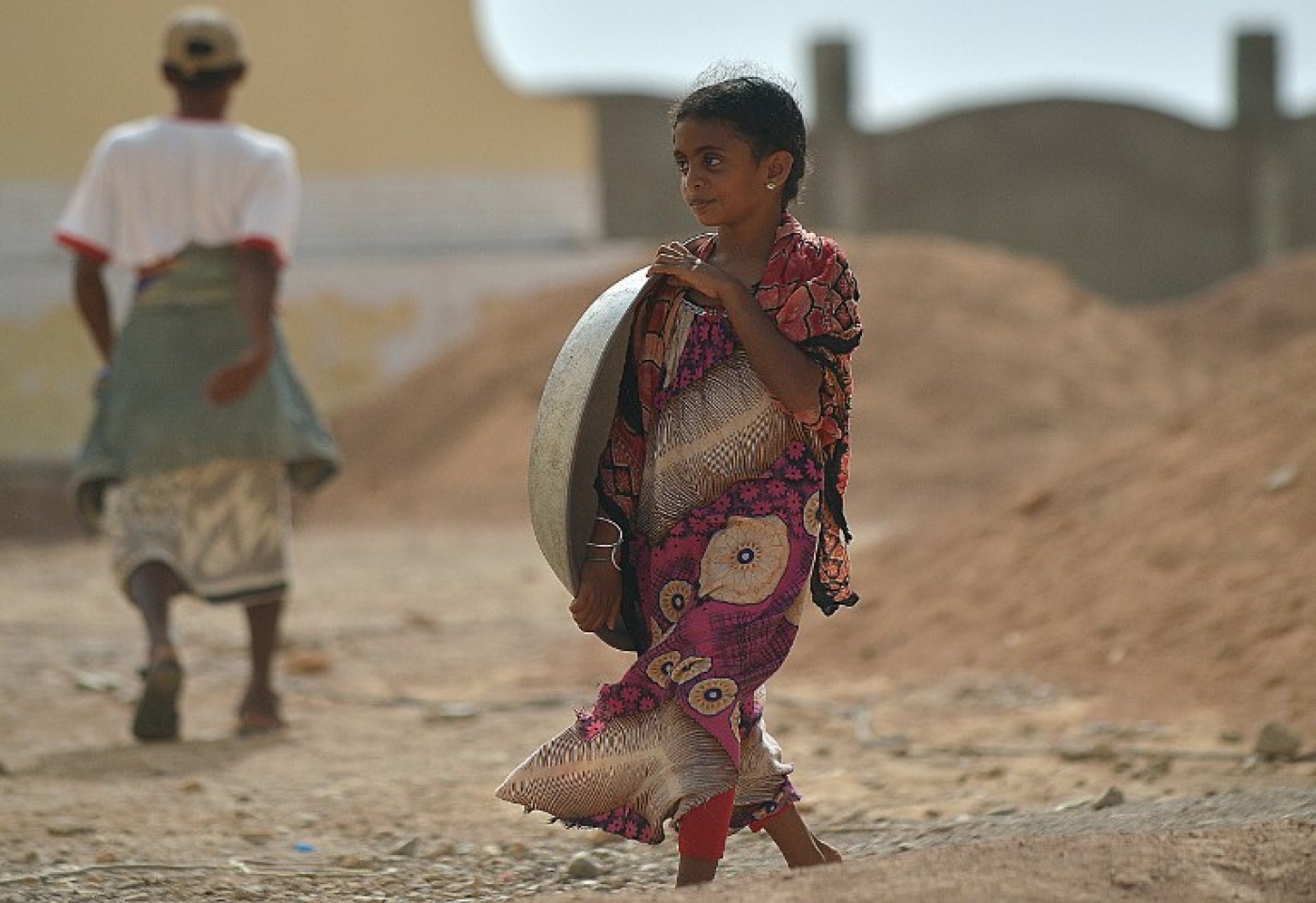 A young Yemeni girl holds a metal-basin as she heads to her chores at a refugee boarding facility run by the UUNHCR at Obock, a small port town in Djibouti on April 13, 2015 (AFP)
By
AFP

Refugees from war-torn Yemen have described the terror of intense airstrikes as they arrive in the Horn of Africa, where aid agencies are fearing an influx of people.

On the shores of Djibouti, those who have taken a perilous boat ride across the Gulf of Aden describe the horror of the bombing that pounded their homes in Yemen.

"Suddenly the planes came and airstrikes hit," said Murisala Mohamed Ahmed, a community leader from Yemen's Bab al-Mandeb region, the key shipping channel at the entrance to the Red Sea that separates Africa from Arabia.

"The military positions were near, and we feared for the children... we had to come to Djibouti," he added. They crossed the narrow straits to the Horn of Africa, which is only 30 kilometres wide at its narrowest point.

"We came on small boats, our own boats. Whole families came - 30 families with 200 people."

Shiite Houthi rebels have seized swathes of territory in Yemen since they entered the capital Sanaa in September 2014, forcing government forces to flee.

While just a few hundred refugees from Yemen have registered in Djibouti in recent weeks, the UN refugee agency UNHCR says preparations are being made for many more.

Djibouti, a key port for the Horn of Africa, is already stretched with the refugees it hosts: the tiny nation of some 850,000 people looks after some 28,000 mainly Somali refugees.

"Djibouti has a long tradition of hosting refugees from the different countries in the region," said UNHCR spokesman in Djibouti Frederic Van Hamme.

"It is a big pressure for a small country like Djibouti to receive a large number of refugees."

Many are now being looked after in the small port of Obock, on Djibouti's northern shores, bringing with them "terrible stories linked to war," Van Hamme said.

"The journey was on a diesel tanker boat... for two days with no proper seats," said Abdallah Mourad Abdo, a journalism student from Yemen's southern key port of Aden. "We could see airstrikes. It was terrifying."

Yemen slid deeper into turmoil after a Saudi-led air campaign began on 26 March to push back the rebels' advance after they forced President Abd Rabbuh Mansour Hadi to flee the country.

"I love my country, I don't want to leave it but the situation is terrible," said Shahira Shehbaz, a university student from Aden. "We just ran away from there by boat."

In Yemen, more than 600 people have died and 2,000 have been wounded in the fighting, according to UN figures.

The war in Yemen, pitting supporters of the president against Houthi rebels, has reversed the refugee flow in the region, which previously saw refugees flee the Horn of Africa for Yemen, where they accounted for nearly all the 250,000 refugees registered in the Gulf country.

Almost a thousand Somali refugees from Yemen have landed in northern Somalia this month, according to the UN refugee agency.

"Though numbers are not big so far, we anticipate they could grow and we are preparing accordingly," said Carlotta Wolf, UNHCR Somalia spokeswoman. "All groups that arrived in Somalia say more people are trying to leave from Yemen."

After almost three weeks of the Saudi-led campaign, the situation is rapidly deteriorating, particularly in Aden where humanitarian groups are struggling to deliver aid.

UN Secretary General Ban Ki-moon warned on Sunday of a huge humanitarian crisis as "civilian casualties are mounting and public infrastructure is being destroyed".

But as people flee the war, refugees apparently unware of the violence in Yemen still continue to arrive.

UNHCR says that the Yemeni Red Crescent is "registering hundreds of asylum-seekers who continue to arrive on Yemen's shores," describing how "these desperate people, mostly Somalis and Ethiopians, are either unaware of the situation or in the hands of smugglers and unable to escape their journeys."

But in Djibouti, the refugees who have reached safety mourn the loss of their old lives, unsure of what they will do next.

"Our complaints to Allah is against those who made us flee and put us in this situation," Ahmed said. "Now we feel lost and we don't know what is going to happen to us."