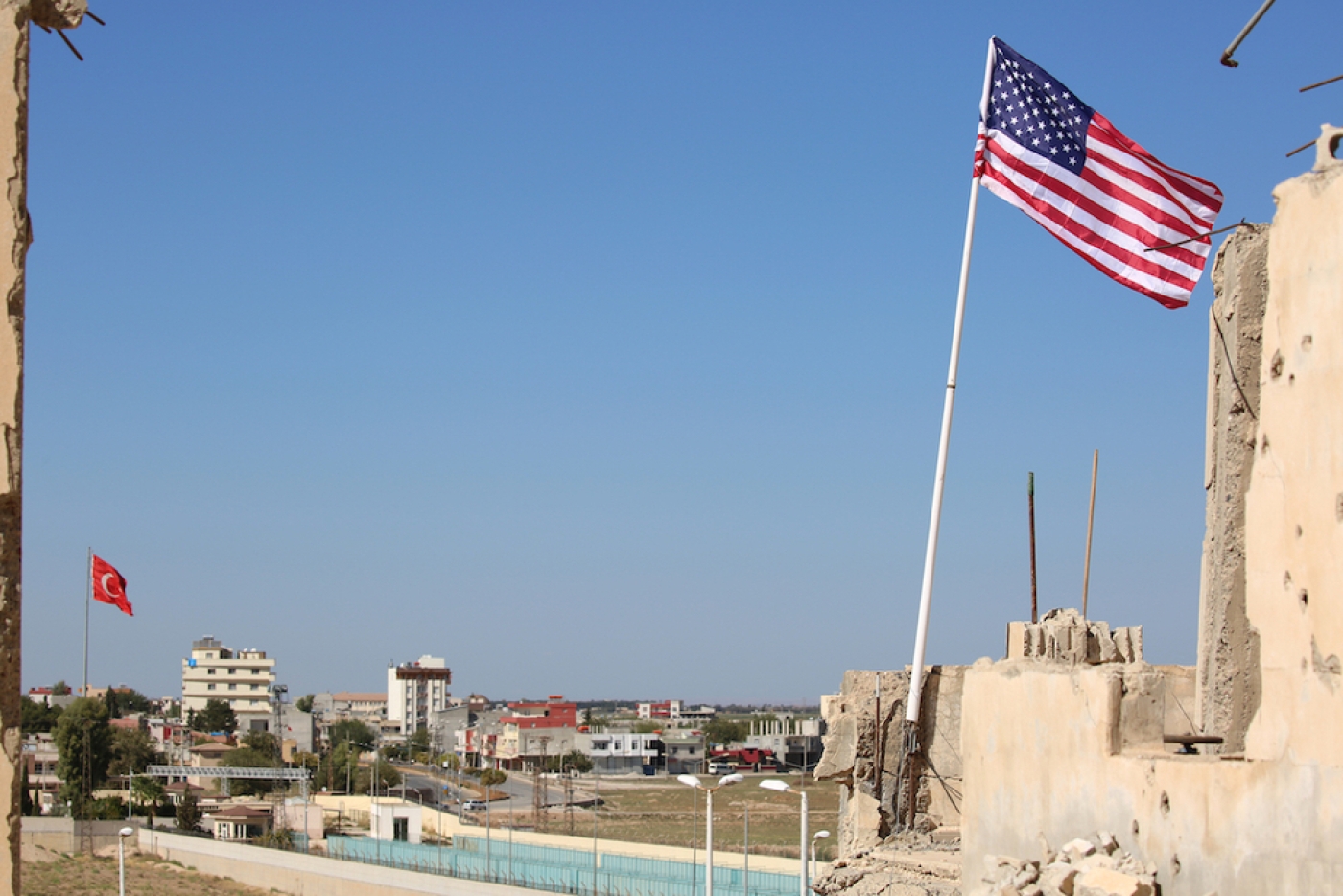 An American flag in Tal Abyad near the border with Turkey, where a Turkish flag can be seen (AFP)
By
Alex MacDonald

Al-Qaeda's former affiliate in Syria has called on opposition groups not to aid Turkish forces in the north of the country, saying they are a front for a US occupation.

In a statement released on Friday, Jabhat Fateh al-Sham (JFS), formerly known as the Nusra Front, said they would not be supporting the Turkey-led Euphrates Shield operation, despite statements of support from other rebel groups.

They cited US support for the Kurdish YPG, with whom Fateh al-Sham has clashed on numerous occasions, as proof of the US's intentions.

"We forbid fighting in the countryside of Aleppo province under any regional power or international coalition," read the statement, which makes no explicit reference to Turkey, but refers to the Euphrates Shield operation in the header.

"This includes aiding or co-ordinating with them. The necessary legitimate conditions for aiding [in this battle] do not exist."

The statement focuses heavily on the role of the US, which has provided direct support for both the YPG - as part of the Syrian Democratic Forces - and the Turkish-backed forces.

"The US intervention in the countryside of Aleppo will make the situation worse - it is a barefaced occupation and a direct attack. The US support for the PKK is hidden from no one," they said, referring to the YPG by the name of its Turkish sister organisation.

"It supports them at the cost of the Sunni regions."

This position stands in contrast to a religious edict released by fellow Syrian rebel group Ahrar al-Sham on Tuesday which said it was "permissable" to work with Turkey in fighting the Islamic State group.

“It is permissible to cooperate with Turkey to fight the Islamic State, and there is a need for an Islamist group to rule there to prevent groups like YPG from taking over,” the edict read.

“So Ahrar al-Sham and other factions can go ahead and cooperate with Turkey,” it added.

Other groups, such as Faylaq al-Sham, have directly aided Turkish forces in liberating areas held by IS like Jarabulus.

Turkey has long been accused of having provided weaponry and other resources to Fateh al-Sham in its previous incarnation, despite al-Qaeda being internationally recognised as a "terrorist organisation", including in Turkey itself.

The willingness of many rebel groups in Syria, including many backed by Turkey and vetted by the CIA, to work with Nusra proved highly controversial and raised fears that al-Qaeda was becoming emboldened in the country and could use it in future as a base for launching attacks internationally.

On Wednesday, Turkish President Recep Tayyip Erdogan described Nusra as a "terrorist group" on Twitter, despite previously appearing to condemn the EU for referring to the group as such:

Terrorist groups including Daesh, Al Nusra and PYD-YPG continue their activities at the regional and global levels.

A contingent of US special forces have been on the ground in northern Syria helping Turkish forces and their allies in the Syrian opposition - but their presence has not always been welcomed.

Last week a video released on social media appeared to show Turkish-backed Syrian rebels driving US forces out of the town of al-Rai.

In the video, fighters from the FSA chant that US forces are "pigs", "crusaders" and "infidels".

The US soldiers were working with Turkish forces as they advanced through al-Rai in preparation for an offensive against nearby al-Bab, which is controlled by IS.

In a speech at the UN on Thursday, Erdogan accused the US of providing weapons to the YPG, despite Ankara's repeated insistence that the group is a "terrorist" organisation.

"If you think you can finish Daesh (IS) off with the PYD and YPG, you cannot, because they are terrorist groups as well," he said in remarks posted on the presidential website.

Previously, the US has insisted that any military equipment provided to the Syrian Democratic Forces in the past has gone only to Arab fighters.

There are about 30,000 fighters in the SDF which is made up largely of Kurds, but also has a significant Syrian Arab component.

General Joe Dunford, the chairman of the Joint Chiefs of Staff, said on Thursday that the US was considering arming the SDF as part of the offensive to retake the IS stronghold of Raqqa.

But Dunford said that the US would work "very closely with our Turkish allies" to assuage Ankara's concerns over the Syrian Kurds' long-term political prospects.

Turkey's presidential spokesman Ibrahim Kalin said on Thursday it was "out of the question" for Ankara to join any operation to take Raqqa if it included the YPG or PYD.