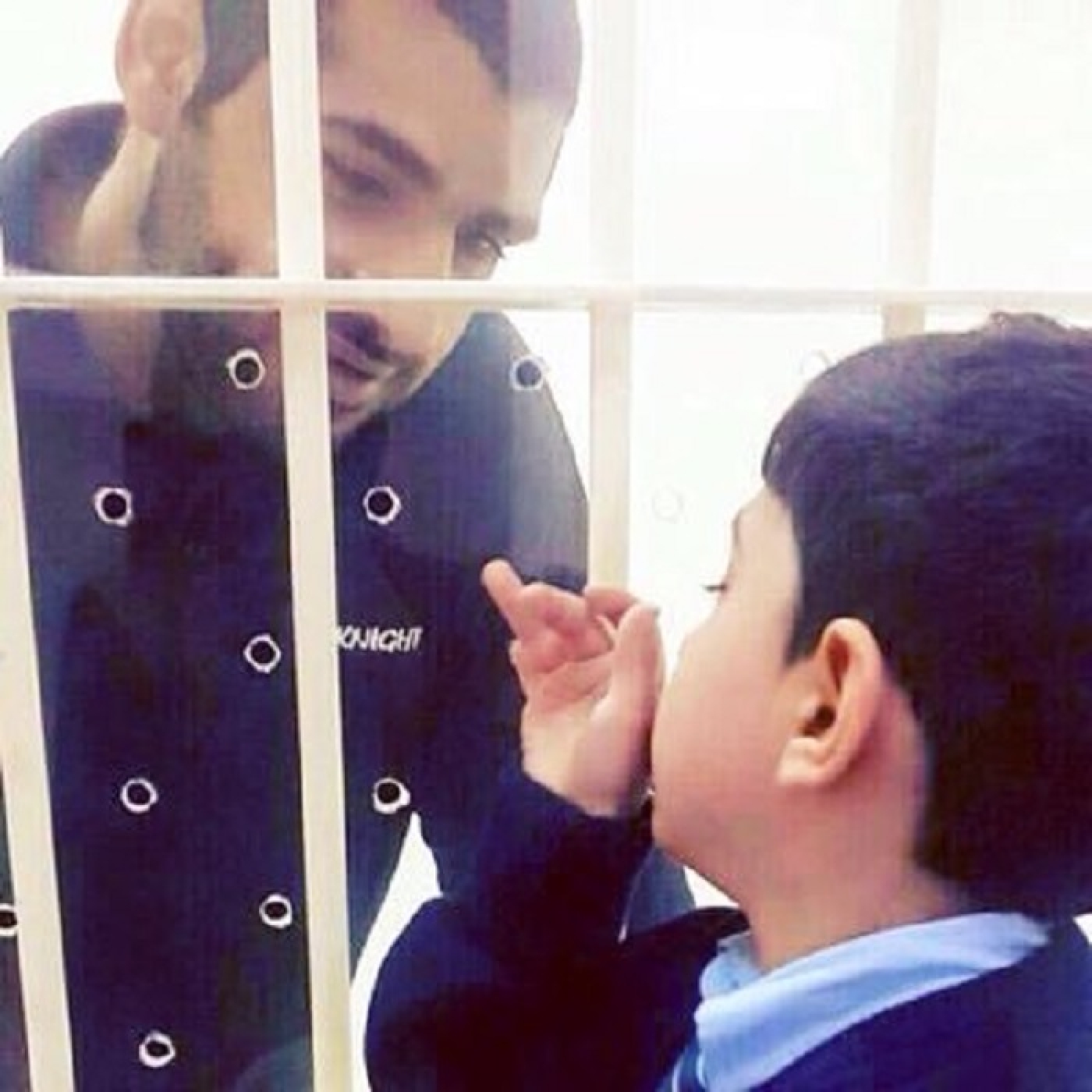 Death-row prisoner Mohammed Ramadan, pictured in prison in Bahrain with his son, was allegedly tortured (Reprieve)
By
Jamie Merrill

UK government contractors have spent more than 650 days in Bahrain training prison guards, including officers at the notorious Jau prison where death-row inmates are held and allegedly tortured, Middle East Eye can reveal.

Contractors for the Foreign Office spent a total of 685 days in Bahrain training guards from 2015 to the end of 2016, making 28 visits to the country in 12 months, according to documents obtained by London-based rights group Reprieve.

The contractors are employees of NI-CO, a company owned by the Northern Irish government and appointed by the Foreign Office in Bahrain, which has trained more than 400 prison guards as part of a contract worth the equivalent of $1.2m.

Calls for the Belfast-based company to halt training security forces in Bahrain have consistently fallen on deaf ears, despite claims that it is working with organisations linked to torture and mistreatment.

The previously unreported scale of British involvement with the Bahraini prison system, revealed after a Freedom of Information request, has angered rights campaigners, who say it allows the oil-rich state to "shield itself" from international criticism and to "act with impunity".

The training work carried out by NI-CO is thought to part of a controversial £2m-a-year British programme of support for Bahrain's security and justice system.

The details of Britain's support for Bahrain, a key Middle East ally whose prisons have received millions of pounds worth of support from Britain since 2011, comes as a string of high-profile arrests and detentions of journalists and opposition figures has sparked international condemnation.

On Wednesday democracy activist Ebtisam al-Sayegh was charged under anti-terrorism laws after two weeks of interrogations, amid claims of torture and sexual abuse.

Bahrain says the charges relate to plots to attack members of the security forces and receiving funding from Hezbollah, which is prescribed as a terrorist organisation in Bahrain.

Allegations of torture and sexual assault in custody

However, the day before Sayegh was charged, Dubravka Simonivic, the UN special rapporteur on violence against woman, condemned her "arbitrary detention" and called for an investigation into allegations of torture. This followed calls last week from the US State Department for her release.

Bahrain denies claims of torture and sexual assault and an official told MEE that "any allegation of mistreatment is taken very seriously".

Attention has also focused on the case of death row prisoner Mohammed Ramadan, a fine against independent journalist Nazeeha Saeed and the continued detention of human rights defender Nabeel Rajab, who was sentenced to two years in prison last week for "broadcasting fake news" and undermining the "prestige" of the strategically vital kingdom.

Rights groups have condemned the decision as an assault on free speech, and Rajab, who is president of the Bahrain Centre for Human Rights, also faces a further prison sentence for political tweets. Last week Amnesty International said it was clear that the "Bahraini authorities will go to any length to silence criticism."

"The UK training has taught the Bahraini government how to shield itself from international criticism and emboldened it to act with impunity," Sayed Ahmed Alwadaei, director of advocacy at the London-based Bahrain Institute for Rights and Democracy told MEE.

"I've interviewed victims of sexual abuse, torture survivors and witnesses of protesters shot dead, all at the hands of the Bahraini police. All of them suffered in the past three months alone," he said.

He added: "The UK government should be seriously concerned that since their involvement began, policing practices have only gotten more abusive. It's time for the UK to end its whitewash programme and hold Bahrain to account."

A spokesman for the Bahrain embassy in London said that criticism aimed at NI-CO and UK support for Bahraini prisons was "unjustified and unfair".

He said Bahrain accepted "more needs to be done" to improve its rights record, but attacked the "misguided intentions" of those with "a political agenda" against Bahrain.

He said: "In the past three years with NI-CO's assistance, as part of the Bahrain-UK technical cooperation programme, Bahrain has been able to reshape its human rights landscape and strengthen protections and guarantees."

A plea for compassionate release

The release of documents showing the scale of UK involvement in Bahrain's prisons coincides with a call for Boris Johnson to call on Bahrain officials to free an imprisoned torture victim so he may see his mother before she dies.

Reprieve has written to the foreign secretary to urge the Bahrain government to grant immediate temporary release to Ramadan, a former police officer.

Ramadan's elderly mother is reported to be "extremely ill" and "close to death", prompting the rights group to call on the Foreign Office to use its "close relationship with the Bahraini authorities to secure Ramadan's urgent release, so that he may visit his mother before she passes".

Ramadan, an opponent of the government who claims he was tortured into making a false confession, was sentenced to death for taking part in a bomb plot that killed a policeman.

He was arrested in February 2014 and is being held at Jau prison, where NI-CO has trained guards.

During this period, at least one inmate at Jau was reportedly tortured and sexually assaulted by guards. Ali al-Singace's confession was based on a forced confession, says Reprieve. Alongside two other men he was executed by firing squad in January, breaking Bahrain's moratorium on the death penalty, which had been in place since 2010.

Harriet McCulloch, a deputy director at Reprieve, told MEE: "Mohammed Ramadan and his family have been through a horrifying ordeal. He was sentenced to death on the basis of a false confession extracted through torture."

MEE understands that Bahrain officials have denied Ramadan's request for compassionate release and campaigners now say that his only hope of seeing his mother rests with representations to the British foreign secretary.

A spokesperson for the Bahrain embassy in London told MEE that Ramadan was "convicted of the premeditated murder of a police officer" and that Bahrain uses the death penalty "rarely and in only in the most serious cases, and then in accordance with international law".

McCulloch, who has been following the case for Reprieve, said: "Our government must urgently use the UK's growing relationship with Bahrain to help Mohammed and his family. At the very least, the Foreign Office must call on the kingdom to let Mohammed see his dying mother without delay. The UK owes him that much."

However, a foreign office spokeswoman said: "It would be for the Bahraini authorities to process any application for temporary release on compassionate grounds."

They added: "We also continue to monitor the case of Nabeel Rajab and have raised it with the Bahraini government at senior levels. We note the two year sentence given to him and we are aware there are further steps in the judicial process including the right of appeal."

The spokeswoman declined to address specific issues of prison training and the role played by NI-CO but said that the UK is "committed to working with Bahrain to implement its reform agenda and encouraging it to deliver on its international and domestic human rights commitments."

NI-CO has said its work in Bahrain is in tune with recommendations from the UN and a commission of inquiry in Bahrain.