FSA faction accused of torture and murder in southern Syria 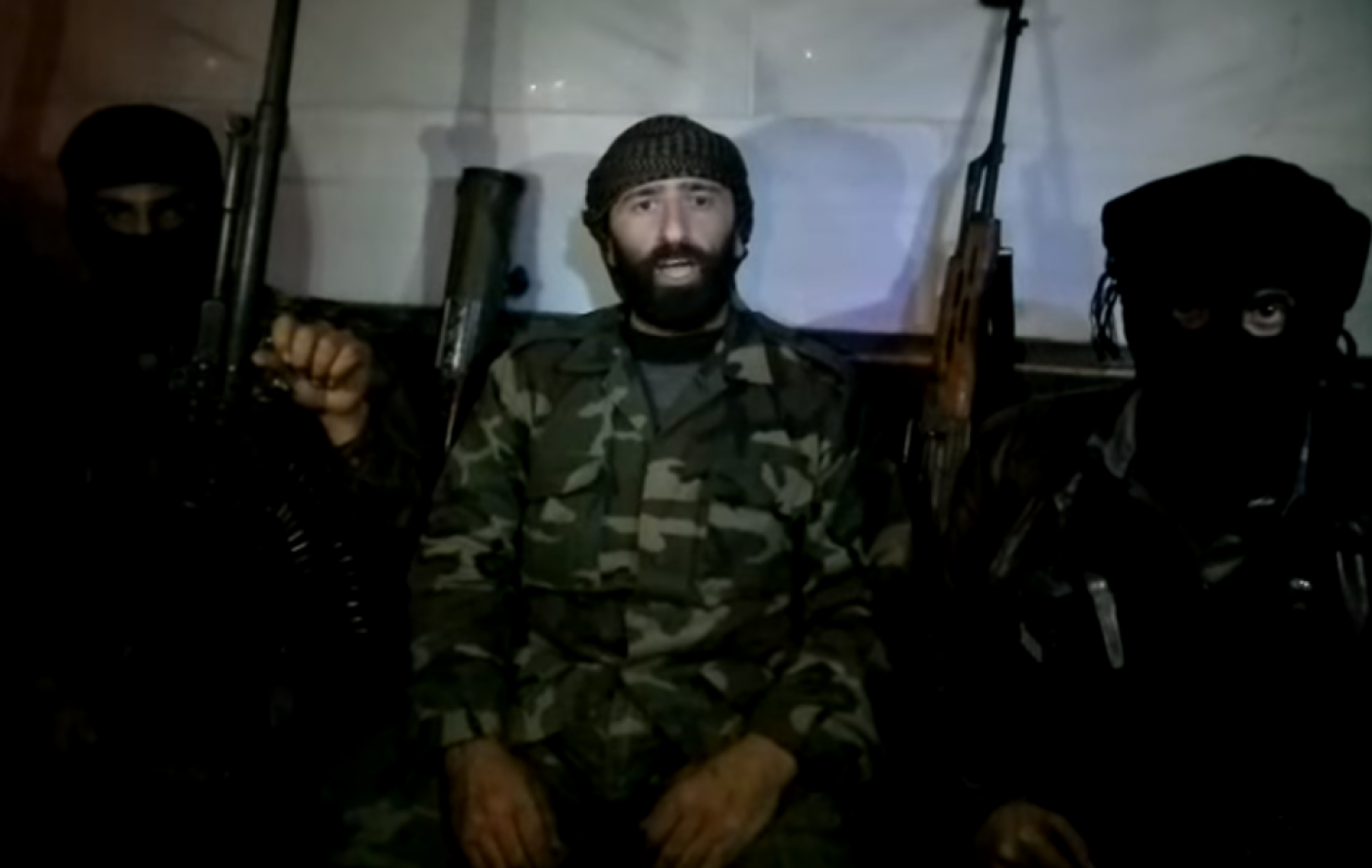 BEIRUT - A faction within the Western-backed Free Syrian Army has been accused of torturing and murdering a Syrian army defector, in a months-long investigation that points to a wider trend of forced disappearances and abuse in rebel-controlled areas of the country.

Zeidan al-Nseirat, a colonel who defected from the Syrian army to the opposition in 2014, died in March in a prison controlled by Shabab al-Sunna, an armed faction in Daraa affiliated with the FSA's Southern Front.

The Syrian Network for Human Rights last week published a reconstructed account of Nseirat's arrest, torture and death through evidence from relatives, local officials and a defector from Shabab al-Sunna.

The monitoring group, founded in 2011 and known as SNHR, argued that the aim of documenting cases like this is to push for accountability in rebel-held areas.

“These cases are rare [in] armed opposition detention centres so it must be highlighted and condemned,” the group said, “in order to expose the perpetrators of these crimes and call on the political opposition to try to deter them and even hold them accountable and drain their funding resources.”

A death in Daraa

Nseirat had been part of a delegation negotiating a local truce with the Syrian government that would purportedly see an end to bombardments as well as the movement of aid and goods into rebel-controlled areas of the Daraa countryside.

In January, Sheikh Maskin fell to the government. This allowed government forces, backed by Lebanese Hezbollah and Russian jets, to put pressure on Ibtaa - Nseirat’s hometown - threatening local residents with truce, or destruction.

Ibtaa lies between Sheikh Maskin and Daraa, and is generally regarded as a strategic target for government forces and their allies.

In 2011-2014, Nseirat was imprisoned by the Syrian government in Sednaya Prison near Damascus on suspicion of planning to defect to the opposition.

Upon his release, Nseirat did so, later heading a local committee in his hometown “tasked with maintaining security... and resolving conflicts [between] residents”, SNHR said.

Although some reports suggest the negotiations were supported by local community leaders, others say rebel factions were not happy.

Nseirat allegedly met a high-ranking local Syrian official, as well as Russian mediators during negotiations, and was abducted by fighters affiliated with Shabab al-Sunna while travelling to Ibtaa back from talks on 28 February.

He was taken along with two others to a prison in Busra al-Sham, where Shabab al-Sunna’s headquarters is located.

Family members and fellow prisoners, speaking to SNHR, recounted how Nseirat was tortured almost immediately after his abduction.

“Two released detainees from Busra al-Sham prison told me that he [had] been subjected to severe torture since the moment he was brought in by the guards,” Nseirat’s brother, Mohamed, told SNHR. “On the third day... my brother was brought from the torture room to the dormitory and he was unconscious because of the torture.”

The next day, Mohamed added, “detainees tried to wake him up but they found he was dead”.

SNHR’s investigation has attributed the death of Nseirat to “torture and negligent health care” inside the Shabab al-Sunna prison. The family maintains that the group has kept Nseirat’s body and will not disclose where it is, months after his death.

The Southern Front’s spokesman declined to comment on the SNHR investigation, but said the alliance was working with Shabab al-Sunna to resolve the incident.

‘Agent of the regime’

The commander of Shabab al-Sunna, Ahmad al-Ouda, denied to Middle East Eye that his faction had played any role in Nseirat's death. He said the allegations were “rumours” and that Nseirat had been arrested because he was "in touch with and coordinating with the regime".

"[Nseirat] was an agent of the regime with the goal of helping the regime to recapture liberated areas in his local area," Ouda said.

"Nseirat was not tortured, nor did he die as a result of torture; he had a medical record proving that he had a heart disease, and when he died it was because of a heart attack."

Ouda said the group has held Nseirat’s body because "the regime wanted to negotiate to exchange of the corpse," again alleging close links between Nseirat and the government side.

Shabab al-Sunna belongs to the Southern Front, a coalition of mostly secular nationalist and "moderate" Islamist groups that controls relatively large patches of territory, mostly around Daraa and the Syria-Jordan border to the south.

The Southern Front has been described by analysts as the best prospect for a moderate Syrian future without President Bashar al-Assad - the “last best hope”, according to Lina Khatib, the head of the Middle East and North Africa programme at Chatham House.

The coalition espoused a system of progressive local governance and proved itself militarily effective against the government in the south, giving it both local and international legitimacy.

Through the Military Operations Centre (MOC), an Amman-based unit supported by the US, European states, Jordan and Saudi Arabia, the Southern Front receives arms, intelligence and logistical backing.

Since then, and particularly since Russia’s intervention in Syria in September 2015, some argue the alliance has become a victim of geopolitics.

However, some say the Southern Front has been restricted to fighting Islamic State-linked groups in the south, rather than the government, purportedly at the behest of the MOC. The move has not been popular.

Shabab al-Sunna meanwhile has been criticised for abusing and even killing perceived critics in the past.

According to SNHR, Shabab al-Sunna has been linked to a handful of cases of enforced disappearance and torture since December 2015, when 24-year-old Refat Taleb Abu Halawa was arrested by the faction. A day later, information emerged that Halawa had died of torture.

Lawyer Abdel Moneim al-Khalil was badly beaten by Shabab al-Sunna in June after posting criticism of the group on Facebook.

Nurse Ahmad Mohamed al-Meqdad was arrested by Shabab al-Sunna in early August 2016. Although he was later released, on 22 August, Meqdad bore signs of severe beatings and torture.

In August, residents in Busra al-Sham protested against “transgressions” committed by Shabab al-Sunna, according to activists, blaming the group for corruption, arbitrary arrests and heavy-handed security policies in areas it controlled.

The protests followed what was described locally as a “military coup” in the town, when Shabab al-Sunna fighters loyal to Ouda raided the home of one of the group’s deputies, Mohammad Taama, beating his father and repeatedly shooting his brother.

The next day, as reported by MEE, Taama loyalists stormed the group’s headquarters in Busra al-Sham, deposing Ouda and putting him under house arrest for his "tyrannical" behaviour.

Taama and his deputy, Bilal al-Droubi, then took over control of Shabab al-Sunna.

Ouda has since been reinstated as the faction’s leader. But as a result of internal divisions, purported recordings were leaked of Nseirat’s violent interrogation by Shabab al-Sunna.

In one recording, Ouda’s voice appears to be audible in the background. Sounds of intermittent beatings punctuate the recording.

The Syrian war has been punctuated by claims of abuse and war crimes on all sides. The Syrian government is accused of arresting or forcibly disappearing tens of thousands since 2011.

Human rights groups have documented at least 17,000 deaths as a result of endemic torture and other abuses inside detention facilities and security branches controlled by the Syrian government and its allies.

“It’s nothing new that there are many other groups committing violations, [although] in many cases they are not on the same scale as the regime,” said co-founder and executive director of Syrians for Truth and Justice (STJ), Bassam al-Ahmad.

Ahmad added however that “over the past months we have seen almost daily violations in areas controlled by the opposition”.

In July, Amnesty International reported on a wave of abductions, torture and summary killings carried out by rebel and militant groups in Aleppo, Idlib and the north Syrian countryside.

“Many civilians live in constant fear of being abducted if they criticise the conduct of armed groups in power or fail to abide by the strict rules that some have imposed,” said Philip Luther, director of the Middle East and North Africa Programme at Amnesty International, at the time.

“Armed groups have free rein to commit war crimes and other violations of international humanitarian law with impunity.”

STJ’s Ahmad attributed increasing violations to “impunity and a lack of observation by civil society”.