A memorial service honouring 31 Egyptian troops killed on Friday by militants in the Sinai Peninsula was held in the Gaza Strip on Monday, as a symbolic gesture of solidarity by the Palestinians.

The memorial was attended by officials from Hamas as well as figures representing other parties and affiliations including Fatah, Islamic Jihad, and the Popular Front.

Many pro-government media outlets in Egypt claimed that people in Gaza have been involved in the attack, a charge that the Palestinian movement Hamas dismisses as untrue.

Hamas had formed an investigation committee – including top security officials, the Interior Ministry and the Health Ministry – to investigate Egyptian media, a source from the Palestinian movement, who requested anonymity, told Anadolu Agency.

"Health Ministry hospitals did not receive any people wounded by gunfire following the Sinai attack," the Hamas official source said.

He added that the Gaza Interior Ministry had tightened its control over Gaza's Rafah border crossing with Egypt immediately after the attack to prevent anybody from either entering or exiting the Palestinian territory. 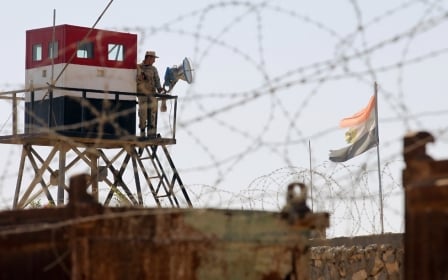