Gazan women ignore claims by Israeli army that protesting is against their femininity, turning up in their thousands for Great March of Return A Gazan woman holds her slingshot as she takes part in the "Great March of Return" protests (MEE)
By
Osha Mahmoud
, Aaya Al-Shamahi
, Yumna Patel

An Israeli army spokesman recently warned Palestinian women to stay in the kitchen, rather than protest, saying their "femininity" demanded as much.

Unsurprisingly, this archaic warning didn't seem to have an effect on Gazan women, who continued to take part in the ongoing “Great March of Return” protests in droves.

The protests, which began on 30 March, are marking the displacement of Palestinians by Israel in 1948, and are set to continue until Nakba Day on 15 May.

Avichay Adraee, the Israeli army's Arabic media spokesman, wrote in a social media post on 5 April: “The good woman is the honourable woman who takes care of her home and children.”

“The deprived woman who lacks honour does not care of these things and acts wildly against her feminine nature, and cares not for how she is seen by society.”

Ahead of a fourth Friday of protests, Palestinian women continue to defy his recommendations, and have slammed his statement as misogynistic and derisory.

Speaking to MEE, Gazan Sabreen al-Khatib said: “We are all one, there is no difference between a man and a woman.”

While 15-year-old Tuqa al-Ghalban added, "We have come here to take part in asking for our right to our country."

"The woman does not belong in the home. We have to take part in this with men and support them as we all ask for the right to return."

No, @AvichayAdraee. A Palestinian woman's place is NOT at home in the kitchen! The Palestinian woman has always been leading the struggle towards Freedom and Return. #misogyny #GreatReturnMarch #جمعة_الكوشوك pic.twitter.com/LlTLxUF8tl

A photo is also included in the army major’s social media post, depicting a woman wrapped in the Palestinian ‘keffiyeh’ with a slingshot.

The Arabic reads: “A woman is defined by her femininity and her weapon is her mind… Where are these traits in a saboteur?”

Addressing Adraee, another female protester, Muna Abu Shame, told MEE: “I say to him, he’s wrong. We’re in the right and we have men behind us. And, God willing, we demand our right to return to our country.”

He writes, "These are the words of the spokesman of the Israeli army, you know the same army in which tens of thousands of women serve, the army representing a nation which claims to believe in gender equality."

Diab also called the Adraee's post an "ugly mix of sexism and racism."

The Israeli army spokesman is no stranger to controversial comments.

On a video recording before the Land Day protest, Adraee used Saudi fatwas as justification for arguing that Palestinians should not take part in the “Great March of Return” protests.

"The Saudi scholar, Sheikh Saleh al-Fawzan, has decreed for banning demonstrations and sit-ins, saying that this behaviour has nothing to do with the Muslims’ ethics, and that it is a characteristic of infidels and a sense of anarchy and chaos that is not tolerated by Islam," said Avichay Adraee.

"Sheikh Ibn Uthaymeen stated that sit-ins and violent demonstrations are evil, because they lead to chaos."

In total, 33 Palestinians have been killed and thousands wounded by Israeli forces since 30 March.

The planned six-week protest is set to end on 15 May - the 70th anniversary of the Palestinian Nakba (Catastrophe), in which more than 700,000 Palestinians were forcibly displaced by Israeli forces in 1948 Arab-Israeli war. 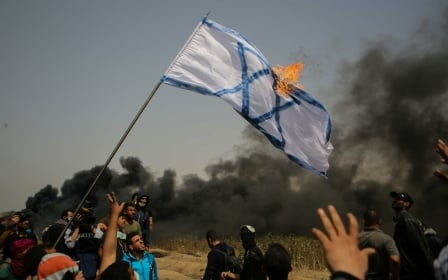