"For decades Israel has never offered something free of charge, you have to fight to get what’s yours", says Mohammed Joudeh, a resident of Gaza 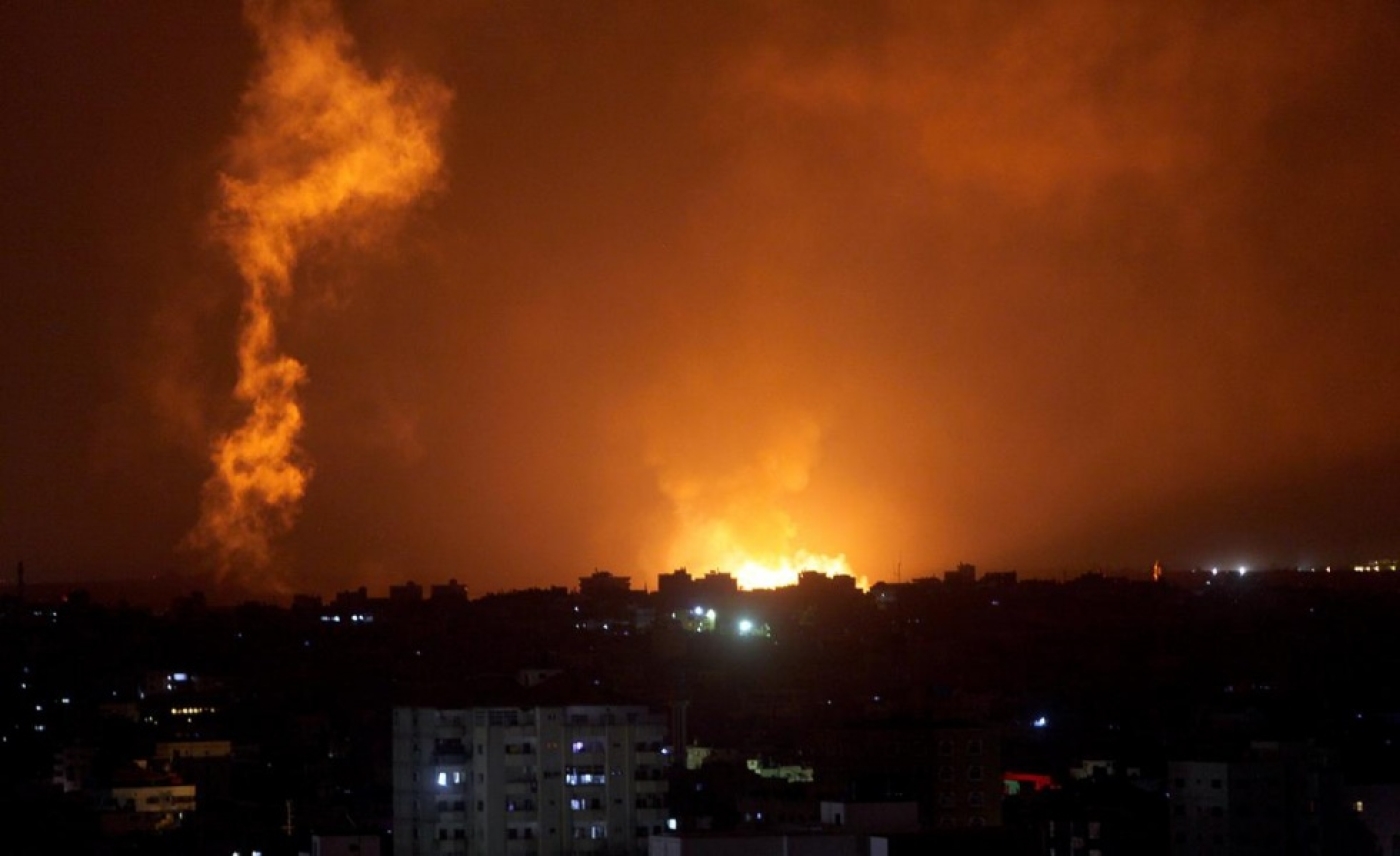 RAFAH, Gaza - The price of resistance may be high, and getting higher by the day. On Friday alone, 55 Gazans were killed, as shelling decimated two entire families. The paradox of Gaza is that as the death toll increases, so does the defiance of its people.

“We have to make a choice: either they finish us or we finish them,”66-year-old Amnah Odah told  MEE:

“This situation cannot continue, or return as it was 11 days ago - under Israel’s 8-years-long siege - where life was equally, if not worse, long-term.”

When asked what she would say to Prime Minister Benjamin Netanyahu if she had 30 seconds, she replies, “You brought this on - there is a limit to Palestinian and human patience, after all.

“Putting Gaza on a diet of malnutrition and collective punishment, cutting off water, interfering with salaries, blocking other basic human rights and not letting basic construction supplies come through the Rafah crossing is unbearable," says Odah. "Of course this is causing people to revolt and stand up for their rights.

“Oppressed Arabs revolted against previous tyrannical regimes. The Israeli occupation is just a continuance of that; stealing our land, wrecking our economy, insulting our identity for 66 years of occupation and blockade,” Odah adds, as she lies on a simple mattress in a modest house in the Rafah refugee camp.

Odah is not alone in her feelings, despite knowing there will be more loss and many more casualties on the Palestinian side if fighting continues.

“If we know those killed were adults fighting on the front, I would be proud, but when I see so many children dying, I am heartbroken,” she says.

“We wonder if Israel is killing children to send a message that no one is safe. I think Netanyahu made it clear that nobody is immune in Gaza - I think targeting civilians is meant to disrupt and terrorise people collectively.”

Mohammed Joudeh, a 45-year-old, father of four also thinks Israel’s goal is to intimidate people, in order for them to turn against the resistance, and give Israel the chance to continue its unreasonable demands and blockade. However, reality on the ground seems to indicate that the Israeli offensive which began on 8 July is having the opposite effect.

“People here are supporting the Resistance, which is obvious in all areas, despite our suffering,” says Joudeh.

Joudeh does not think that Israel will succeed in its latest attempts at intimidation. He says that as hard as it may be, attacking civilians again is losing its impact. After so many years of these attacks, Palestinians feel that the only way to gain national rights and improve living conditions is to resist, he explains.

“For decades Israel has never offered something free of charge, you have to fight to get what’s yours,” he says.

But despite their perseverance, civilians caught on the front line of Israel’s military attacks for the past 14 years also say it’s time to end the bombing and insist that they are tired of living in perpetual fear. 45-year-old Mohammed Abu Shalob is one of the many who says he has had enough of Israel’s artillery shelling.

The latest ground attack launched late Thursday, forced him and his 10 family members to flee their home which lies right next to the ruins of the Gaza International Airport, in Rafah. Miraculously the whole family is still alive, although still very shaken by the incident.

“We were indoors when six artillery shells hit our house," says Abu Shalob. "One wall collapsed around us, forcing the whole family to run in the middle of the night to find shelter from Israel’s tank shells.”

Four of Abu Shalob’s neighbours, however, were injured.

“We had to call ambulances as we couldn’t walk because the ground was covered with fragments of nail-shards from inside the missile," says Abu Shalob.

"Nor could we breathe properly from the white gas which came out of the rockets, making our mouths dry,” he adds, while lying down on the soccer field of an UNRWA school, where many of the displaced have taken shelter. While the UN is providing the most basic rations it has been caught unprepared for the scale of the emergency, with many of the displaced complaining that there are inadequate food provisions for the suhur and iftar meals of Ramadan.

In each classroom there are usually around 50 women sleeping. Men are scattered in the soccer field, while others are out on the street corners, some sleeping on their sandals, others on shirts and empty cartoons of powdered milk.

Even the UN schools though do not necessarily provide desperately sought shelter from the shelling. During the conflict ambulances have been fired upon and forced to retreat. Abu Shalob says that he was forced to walk a few hundred kilometres to a place where ambulances could be reached.

While Israel has previously been accused of purposefully targeting civilians and civilian infrastructure, Abu Shalob says that, at least for him, this war feels different from the 2008-2009 or 2012 wars. “Before, we didn’t have Israel’s artillery directly targeting our homes,” he says.

Another disturbing development, according to Abu Shalob is the alleged use of tall buildings by Israeli forces, who use them as sniper stations.

“After all, this does not mean that people are willing to go to ceasefire - it’s either we live in full dignity, or have no real life,” says Joudeh.

For him, technology has brought up a new Palestinian generation that is unwilling to accept the humiliation that their families endured under Israel’s occupation. “We have done it for 66 years, Israel has to realize enough is enough,” he adds.

But the price of resistance is high. According to Palestinian sources the last 24 hours alone have seen Israel launch 260 missiles and rockets, while Palestinian factions have sent about 105 rockets and mortars to Israel. The Palestinian death toll in Gaza is now fast approaching 300, including many children. One Israeli civilian and one Israeli solider have also been killed.

In Abu Yousef al-Najjar hospital in Gaza, doctors announce a state of emergency as more people are evacuated and taken to new locations.

“Since early evening, we’ve been targeted by Israeli artillery, with leaflets dropped, ordering us to evacuate our homes,” 38-year-old Hani al-Mahmom told the Middle East Eye.

The fear and confusion is palpable on the ground. As the shelling resumes, Rafah's population rushes around quickly, trying to flee to six UN schools in the city that are the only make-shift shelter they have.

Mahmom and his family were among those fleeing in the early hours.

“Two days ago, I was at my home, despite bombing, but now I am displaced. We are still resilient and supporting Gaza’s Resistance - but we are also still victims of Israel’s cruelty,” he says.

“If we were the ones launching rockets, I would accept Israel returning to target our homes, but we are not.”

The increasing number of targeted civilians is raising questions among international groups about Israel's intentions but, Mahmom believes that Israel’s war does not intend to break Hamas, rather just weaken it.

He says that his children will not forget these sleepless nights when they grow up and he fears that this can only jeopardises the chance for peace in the region. When a 7-year-old knows that Israel is besieging him at such a tender age, there can be no peace, Mahmom explains.

“Israeli troop anger is aimed at all civilians, when it can’t reach the Resistance.” 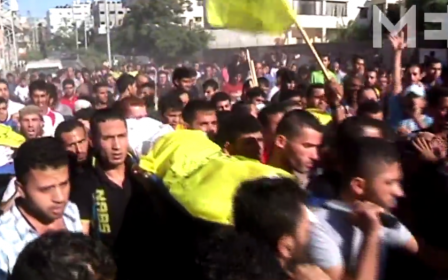