Turkey says Colombian colleges harbour zealots of alleged coup plotter Fethullah Gulen. One closed its Turkish centre - another refuses to do so BOGOTA – Adem Oner did not plan a new life in Colombia, but fell in love with the country on an extended trip and decided to stay, making a living by teaching his native Turkish, and later raising a family.

It was a shock, after a decade living his new life and teaching in several universities, that Oner was labelled a traitor by Ankara and accused of being part of a "terrorist network".

"How can I be accused of being a terrorist after working for 10 years in favour of my country, teaching its language, art and culture?" asked Oner. "Is this what I deserve?"

How can I be accused of being a terrorist after working for 10 years in favour of my country?

A statement from the Turkish embassy in Bogota, from 30 May, accuses professors at the centre of Turkish studies at the Rosario university to be part of the "terrorist organisation that carried out the failed coup on 15 June 2016 in Turkey".

Oner has worked at the Turkish centre at Rosario, known for its focus on Turkish language research and ebru, the Turkish art of paper marbling, for a year and a half.

The embassy's move followed an article in the Hurriyet newspaper, where Turkish intelligence claimed the Hizmet movement of Fethullah Gulen, which Turkey dubs the Fethullah Terrorist Organisation (FETO), had roots in 20 education institutions around the world - two of which were in Colombia.

The "terrorist network" within the prestigious National University of Colombia had been dealt with, according to the Turkish embassy's statement. It had decided to close its Turkish studies centre in 2014 just as it signed an academic agreement with the University of Ankara.

Rosario was, however, the embassy claimed, still a nest of Gulenists.

Oner denies the accusations against himself, his colleagues and his employer: "I have no links with Gulen – either direct or indirect," adding the school he was at taught "zero religion and zero politics".

The Turkish embassy statement gave Rosario an ultimatum on potential exchange agreements with the University of Ankara - a choice, the embassy said, between working with "the aforementioned group or cooperating with one of the best universities in Turkey".

It was a threat that dragged Oner and his colleagues into what is now a global attempt by the Turkish government to smother its foes, specifically in Colombia.

'No Links with Gulen'

Jose Manuel Restrepo, the principal of Rosario, told Middle East Eye the matter had been "investigated immediately". It found nothing against its staff.

"We arrived at the conclusion that there were no accusations or complaints of any kind relating to professors of Turkish studies," said Restrepo.

Since the completion of the investigation, the university has continued with its classes, saying the Turkish embassy was attempting to violate its autonomy.

"In no way will we allow anyone to violate the university's principles," said Restrepo. "Not the national government, nor an international one, much less the embassy of whatever country."

Restrepo added that he is now in the process of negotiating a deal with the Middle East Technical University of Ankara, and that the affair was a "little ridiculous".

The apparent Turkish interest in Colombia does not end there.

According to PanAm Post journalist Angelo Florez de Andrade, his email account was hacked soon after he began reporting on the Rosario affair.

The former student of Turkish history and language at Rosario took up the story to "defend autonomy and freedom of speech", and said its professors were "pacifists and wouldn't support terrorist activities".

Although he initially thought the hack was a coincidence, Andrade then met another Colombian journalist, Valeria Cueva, who reported her Twitter account hacked after she began her investigations.

When Cueva finally regained access to the account, "everything was in Turkish, my photo, tweets and nickname disappeared, and they had sent messages to my contacts in Turkish". She asked a friend to translate the Turkish messages which said "do not follow this account, it is spam".

"The problem," said Cueva, "is that everything relates to Hizmet."

There was no evidence of Turkish government involvement but supporters of Erdogan are known to have hacked Twitter accounts in recent months.

Andrade believes Erdogan could be targeting a "weak" Colombia specifically as an example. "Erdogan is mistaken. Despite all of the problems that Colombia has, we have some institutions that support freedom of speech, such as Rosario."

It remains unclear how the "terrorist" network at the National University was dealt with. Anonymous sources familiar with the institution said there is a "strong relationship" between the Turkish ambassador, Engin Yurur, and the university's principal, Ignacio Mantilla Prada.

Sources also claim that requests by professors to discuss the issue with Mantilla had been consistently refused. The principal did not comment when contacted for a response.

If the accusations are true, the National University's Turkish centre would not be the first to close under political pressure. Erdogan has already toured Africa with the goal of shutting universities associated with Hizmet.

Nations including Senegal and Angola have already shut all schools linked with the movement. In Afghanistan it was reported that Erdogan offered the vice president, Abdul Rashid Dostum, Turkish residency in exchange for the closure of over a dozen Gulen-affiliated schools.

But relations between Turkey and Colombia have significantly strengthened in recent years. Juan Manuel Santos became the first Colombian president to visit Turkey in 2011 and the Turkish embassy in Bogota opened in 2010.

Erdogan's visit to Bogota in 2015 ended in agreements on trade, and soon after, the aid organisation the Turkish Cooperation and Coordination Agency (TIKA) opened a Colombian office.

'A safe haven for Gulen network'

Middle East Eye contacted the Turkish ambassador for a response to the allegations in this article, but was unable to elicit a response. The Colombian education ministry was also contacted for a response but said it had no “no declaration to make in respect to the matter”.

On 28 July, Mehmet Ozkan, the Colombia director of TIKA, and a lecturer at the Turkish police academy, said Latin America and Colombia in particular was being used as a safe haven by Gulenists.

"They [Gulenists] are restructuring, and it includes vanishing from sight and preparing their plans and next move," Ozkan was quoted by the pro-government newspaper Yeni Safak.

Ozkan also said his agency had information that many Gulenists had applied for asylum with the UN's refugee agency in Colombia.

He said visa-free travel to Latin America for Turkish citizens made it an attractive destination for fugitives, some of whom also used the region to transit to the United States.

"They [Gulenists] are very comfortable here because there aren’t too many Turks to keep track of them. This also allows them to perform their activities more comfortably." 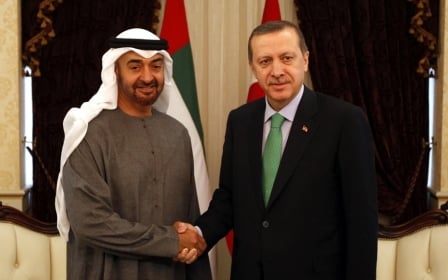