How Israel is 'cleansing' Palestinians from Greater Jerusalem

Measures aim to annex settlements to city and turn Palestinian areas into a no man’s land, warn rights groups 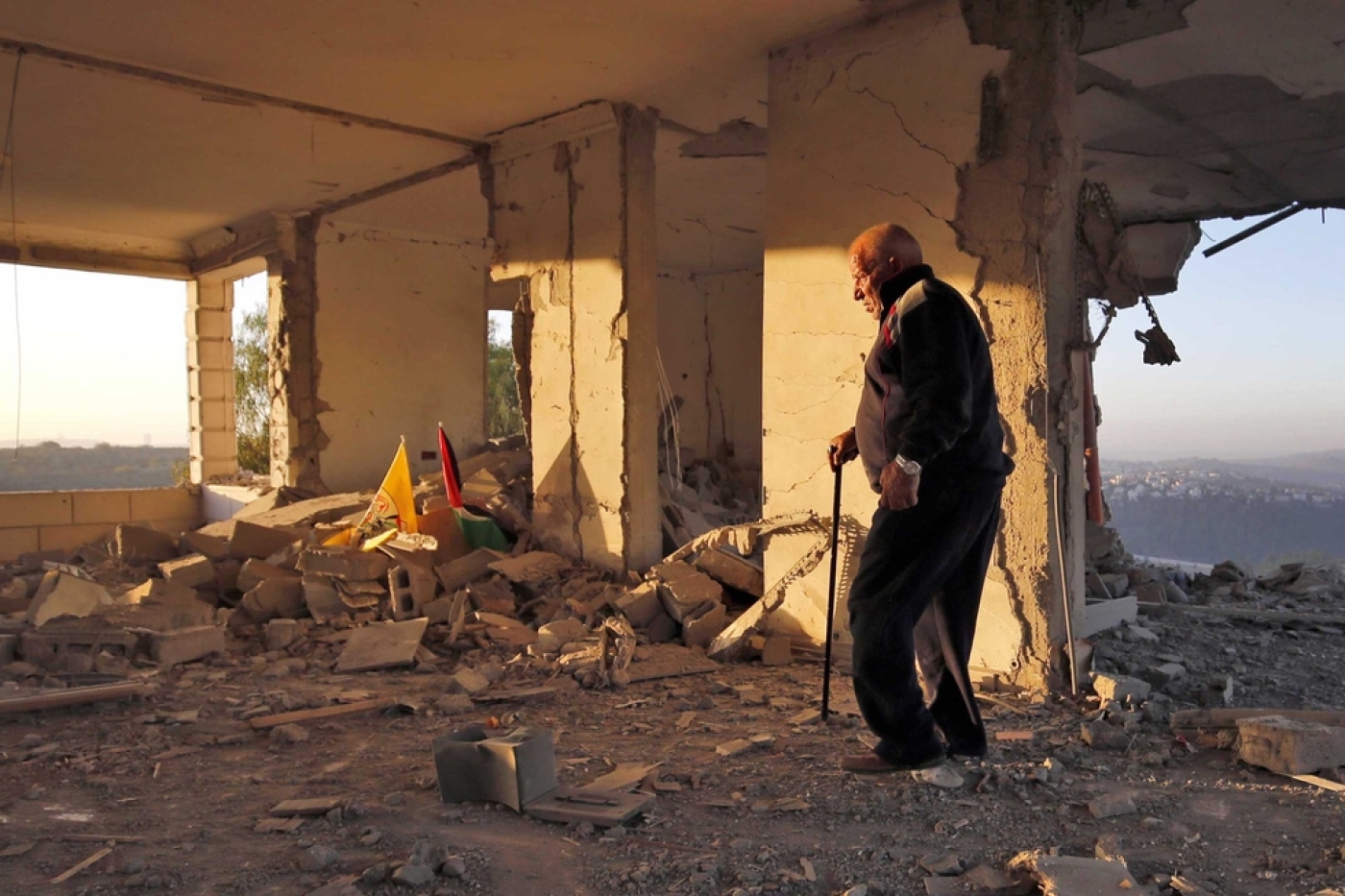 The remains of a house after it was destroyed by Israeli troops in Beit Surik near Jerusalem, 15 November (AFP)
By
Jonathan Cook

JERUSALEM - Israel is putting in place the final pieces of a Greater Jewish Jerusalem that will require “ethnically cleansing” tens of thousands of Palestinians from a city their families have lived and worked in for generations, human rights groups have warned.

The pace of physical and demographic changes in the city has accelerated dramatically since Israel began building a steel and concrete barrier through the city’s Palestinian neighbourhoods more than decade ago, according to the rights groups and Palestinian researchers.

Israel is preparing to cement these changes in law, they note. Two parliamentary bills with widespread backing among government ministers indicate the contours of Jerusalem’s future.

One bill intends to annex to Jerusalem some 150,000 Jews in illegal West Bank settlements surrounding the city. As well as bolstering the city’s Jewish population, the move will give these additional settlers a vote in Jerusalem’s municipal elections, pushing it politically even further to the right.

Another bill will deny more than 100,000 Palestinians on the “wrong” side of the barrier rights in the city. They will be assigned to a separate local council for Palestinians only, in what observers fear will be a prelude to stripping them of residency and barring them from Jerusalem.

Meanwhile, a web of harsh Israeli policies, including late-night arrests, land shortages, home demolitions and a denial of basic services, are intensifying the pressure on Palestinians inside the wall to move out.

'What is going on is ethnic cleansing, without guns'

These measures are designed to pre-empt any future peace efforts, and effectively nullify Palestinian ambitions for a state with East Jerusalem as its capital, said Aviv Tatarsky, a field researcher with Ir Amim, an Israeli group advocating fair treatment for Palestinians in Jerusalem.

“What is going on is ethnic cleansing, without guns,” Tatarsky told Middle East Eye. “Israel hopes to get rid of a third of Jerusalem’s Palestinian population through legislative moves alone.”

Israel’s demographic concerns in Jerusalem date back to 1967, when it occupied and annexed East Jerusalem, combining the large Palestinian population there with West Jerusalem’s Jewish population. It also expanded the city’s municipal borders as a way to covertly annex West Bank land.

Israel initially set an upper limit of 30 percent Palestinians to 70 percent Jews in what it called its new “united, eternal capital”, but has been losing the battle to maintain that ratio ever since. Higher Palestinian birth rates mean that today there are more than 315,000 Palestinians in East Jerusalem, comprising nearly 40 percent of the city’s total population. Projections suggest Palestinians could be a majority within a decade. 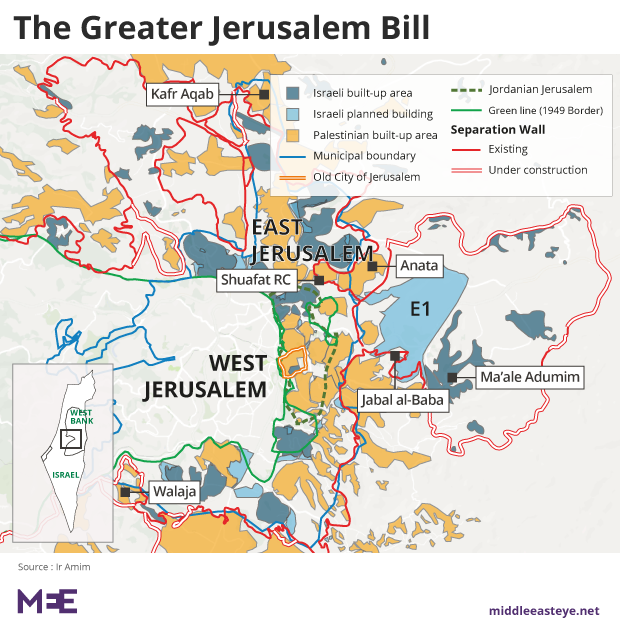 Although few Palestinians in Jerusalem have taken or been allowed Israeli citizenship, and almost none vote in municipal elections, Israel fears their growing numerical weight will increasingly make its rule in the city untenable.

“What we have in Jerusalem is an apartheid system in the making,” Mahdi Abdul al-Hadi, a Palestinian academic in Jerusalem, told MEE.

“Israeli policies are dictated by demographic considerations and that has created a huge gulf between the two societies. Palestinians are being choked.”

Fear of the demographic loss of Jerusalem provoked the launch of a high-profile campaign by political and security leaders last year: “Save Jewish Jerusalem”. Fearful that Palestinians will soon be a majority and might start voting in municipal elections, the campaign warned Jewish residents they would “wake up to a Palestinian mayor in Jerusalem”.

Over the past year government ministers, including Education Minister Naftali Bennett, have aggressively pushed for the annexation of Maale Adumim, a large settlement outside Jerusalem, in the West Bank. Gradually, they appear to be winning the argument.

'Israeli policies are dictated by demographic considerations and that has created a huge gulf between the two societies. Palestinians are being choked'

Late last month a ministerial committee was set to approve a Greater Jerusalem Bill, legislation intended to expand Jerusalem’s municipal borders to include Maale Adumim and several other large settlements in the West Bank. It won Netanyahu’s backing.

The settlements would be annexed in all but name, and their 150,000 residents would be eligible to vote in municipal elections.

Yisrael Katz, the minister of transport and intelligence who helped introduce the bill, has said its purpose is to “safeguard a Jewish majority” in the city. A recent poll showed 58 percent of Israeli Jews support the plan.

Under pressure from the administration of US President Donald Trump, Netanyahu has temporarily put the bill on the back burner. Washington is reportedly worried that the legislation will stymie a peace initiative it is reportedly about to unveil.

Ir Amim fears the legislation is likely to be revived when pressure dissipates. A position paper it published last week warned that the legislation was the “first practical move since the annexation of East Jerusalem in 1967 to implement the de facto annexation of areas in the West Bank to Israel”.

After decades of implanting Jewish settlers in the midst of Palestinian areas to prevent their development and growth, Israel is beginning the difficult process of disentangling the two populations, said Tatarsky.

The effects are being felt keenly on the ground.

“These Palestinian communities outside Jerusalem are like a bone in the throat for Israel,” said Tatarsky. “Israel is trying to make their life as hard as possible to force them to leave, and so create a territorial continuity between Jerusalem and the settlements.”

The latest raid on Jabal al-Baba came immediately after Israel notified the hundreds of residents of Walaja that a military checkpoint would be relocated close to the entrance to their village. That will cut them off from ancient agricultural terraces on Jerusalem’s uplands their families have farmed for generations.

Although many of Walaja’s residents have Jerusalem identity papers issued by Israel, the new move will effectively seal them off from the city, as well as their lands. The terraces and a nearby spring, where the villagers water livestock, will become “attractions” in an expanded Jerusalem metropolitan park.

Meanwhile, Israel is tightening its chokehold on Palestinians in East Jerusalem’s built-up areas.

Those on the far side of the concrete wall have been effectively abandoned by the Jerusalem municipality, and are finding it ever harder to access the rest of the city, said Daoud Alg’ol, a Palestinian researcher on Jerusalem.

A bill by Zeev Elkin, the Jerusalem affairs minister, is designed to disconnect from the Jerusalem municipality Palestinian neighbourhoods such as Walaja, Kafr Aqab, Shuafat refugee camp and Anata, which lie beyond the separation wall.

They would be hived off into a separate local council for Palestinians, instantly reducing the city’s Palestinian population by a third.

“Once Palestinians are in a separate local council, Israel will say the centre of their life is no longer in Jerusalem and their Jerusalem residency papers will be revoked,” said Alg’ol. “This already happens, but now it will be on a much larger scale.”

Even though their residents pay taxes to the Jerusalem municipality, Palestinian areas outside the barrier are already “twilight zones” of neglect and lawlessness.

In Kafr Aqab, for example, which is sealed off from the rest of East Jerusalem behind the wall and a military checkpoint, residents receive few services. Israel, however, has also denied the Palestinian Authority access.

“They are living in a no-man’s land,” said Alg’ol.

These areas have become a destination both for criminals and for Palestinian families caught out by Israel’s intricate web of strict residency regulations. Palestinians in the West Bank are denied access inside Jerusalem’s wall, while Palestinians in Jerusalem risk being stripped of their residency papers if they move out of the city.

Couples who have married across that residency divide have found a refuge in Kafr Aqab as Israel slowly disconnects the neighbourhood from East Jerusalem. Residents say the population there has rocketed from a few thousand to tens of thousands in the past few years.

As a result, a building boom has taken place beyond the wall as Palestinians take advantage of Israel’s lack of enforcement of building regulations. That has offered demographic gains for Israel too, said Alg’ol.

“Planning restrictions and land shortages inside the wall have created a housing crisis for Palestinians, making it too expensive for them to live there,” he said. “They have been forced to move to areas outside the wall to find more affordable housing. Economic pressure is creating a silent transfer.”

Palestinians in neighbourhoods inside the wall are being driven out in other ways, noted Tatarsky.

Traditionally, Israel has used a range of policies to strip Palestinians of land and prevent development in Jerusalem and justify house demolitions.

Those have included declaring Palestinian areas “national parks”, thereby criminalising the homes in them; confiscating the last green areas to build Jewish settlements; and allowing settlers to take over Palestinian properties in the Old City and surrounding neighbourhoods as Israel seeks to strengthen its hold over the city’s holy sites, especially al-Aqsa mosque.

There are now some 200,000 Jewish settlers living in East Jerusalem.

“Palestinians are never part of the planning in Jerusalem, and their interests are never taken into account – they are always an obstacle to be removed,” Alg’ol told MEE. “Israel wants the land but not the Palestinians on it.”

Pressure has mounted on Palestinians in Jerusalem, noted Tatarsky, as their communities have been denied schools and basic municipal services. More than 80 percent of Palestinian children live below the poverty line.

The Jerusalem municipality and police have also begun stepping up “law enforcement” operations against Palestinians – or what residents term “collective punishment”. Under claims of “restoring order”, there has been a wave of recent late-night raids in areas like A-Tur and Issawiya. Large numbers of Palestinians have been arrested, demolition orders issued and businesses closed.

“Israel is using the same militarised methods as in the West Bank,” said Tatarsky. “The assumption is these pressures will encourage them [the Palestinians] to move to areas outside the barrier, where sooner or later they will lose their residency rights.

'Israel wants to create a make-believe city free of Palestinians. Where it can, it is ethnically cleansing them from the city. And where it can’t, it simply hides them from view'

“Israel has realised that is an opportunity it can exploit.”

The office of Jerusalem’s mayor, Nir Barkat, issued a statement to MEE denying that the situation of Palestinians in East Jerusalem was deteriorating. It said that there had been dramatic improvements in Palestinian areas in the provision of schools, community centres, sports fields, new roads, postal services and welfare.

It added that Barkat had “developed a plan unprecedented in scope and budget allocation to reduce gaps in East Jerusalem in order to address the 50 years of neglect he inherited from his municipal predecessors and successive Israeli governments”.

Alg’ol said the municipal claims were a denial of reality. “Israel wants to create a make-believe city free of Palestinians,” he said. “Where it can, it is ethnically cleansing them from the city. And where it can’t, it simply hides them from view.”