The Idlib crisis: What you need to know

As Syrian troops and Russian ships descend, a recap on the situation in Syria's last rebel-held province In December 2016, the UN envoy to Syria Staffan de Mistura predicted that Idlib would be "the next Aleppo".

In recent months, Assad has taken back three out of four de-escalation zones - Eastern Ghouta, Daraa and Quneitra, and parts of Homs - which were supposed to be areas where conflict was halted, according to the agreement made between Iran, Russia and Turkey in Astana last September.

That leaves only Idlib, where the government and Russia have continued a bombing campaign, hitting hospitals and other civilian infrastructure, despite the agreement.

With Syrian troops amassing at the border, Russian reinforcement ships arriving in nearby Tartous and the government banning conscription-aged Syrian men from leaving the country, the repeat warnings over the past two years have gained urgency.

Here’s some background info to get you up to speed:

Why does Assad want Idlib?

There are still significant rebel pockets in northern Syria, but recapturing the last province held by rebels would be a significant victory, both symbolically and strategically, for the Syrian government. Some have suggested it could mean the end of the war.

After retaking Eastern Ghouta, Daraa and Quneitra, and parts of Homs, taking back Idlib would give Assad control of western Syria where the majority of the population live.

The government would gain control of the M5 highway which runs from Jordan to Turkey and is critical for trade, and also the M4 which runs between Aleppo and the Assad stronghold of Latakia where Russia’s Hmeimim airbase sits nearby and has faced rebel attacks on occasion from Idlib.

Who is in Idlib?

Before the war started, there were reportedly less than 750,000 residents in the province, known for its agriculture including olives, wheat and cherries. More than 2.5 million civilians are now estimated to live in Idlib, more than half of whom were evacuated from other parts of Syria recaptured by the government.

Jan Egeland, head of the UN’s humanitarian task force for Syria, has described the province as “the largest cluster of refugee camps and displaced people in the world”. 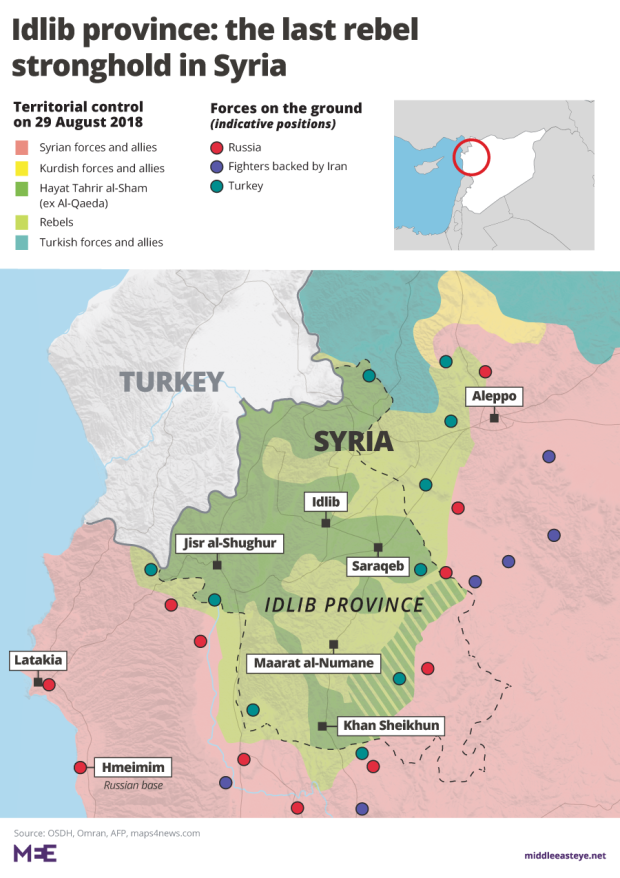 There are also thought to be at least 70,000 rebels in Idlib from various groups including Hay’at Tahrir al-Sham (HTS), which is led by al-Qaeda’s former Syrian branch and the newly-formed National Front for Liberation, a Turkish-backed alliance bringing together Ahrar al-Sham, Nurreddine al-Zinki and other factions.

Idlib has seen massive unrest in recent years due to rebel infighting, a fragmenting factor which will impact any coming offensive.

Turkey opposes a large-scale offensive, fearing that it could prompt a new wave of refugees across its border with Syria. Ankara, which has 12 observation posts set up around Idlib's borders, has asked Russia for time to isolate HTS from other rebel groups to preclude an attack.

Russia has recently said that the Syrian army has a right to defend itself against attacks in Idlib and confirmed it would support those operations. Moscow has also pointed to groups like HTS to argue that ceasefires in de-escalations zones were declared under the condition that "terror" groups would not be present. The country will be looking to curb Iran's influence in Syria moving forward.

Iran’s foreign minister said this week that armed groups in Idlib must be “cleared out and the region should be placed under the control of the Syrian people”. Like Russia, Iran - which just signed a new security agreement with the Assad government - will likely be eyeing Russian power in Syria if the offensive moves forward.

HTS leader Abu Mohammed al-Jolani said late last month that the ceasefires agreed between rebel groups and pro-government forces in the south would not be repeated in Idlib and urged rebel forces to shun negotiations with Assad. He also warned that Turkish observation posts would not protect rebels against a government offensive.

The UN's Staffan de Mistura called last week on Russia, Iran and Turkey to forestall any offensive on Idlib, estimating that around 10,000 "terrorists" remained in the province - presumably referring to HTS - and must be defeated.

The leaders of Russia, Iran and Turkey are scheduled to meet in Iran on Friday for their third summit to attempt to end the Syrian conflict.

Some analysts have suggested that while Russia is the most powerful player and could give the green light to allow the offensive to happen, it may not want to upset its relationship with Turkey.

"To square the circle, Moscow may urge Assad to limit this round of fighting," wrote Chris Phillips, reader in international relations at Queen Mary University of London.

If the assault begins before the Iran summit, Phillips said, it might be smaller than expected.

On Friday, a source told Reuters that Assad was preparing a phased offensive.