Marathon talks to draw up the outlines of a landmark Iran nuclear deal by 31 March looked set on Wednesday to go down to the wire as Tehran's foreign minister played down chances of finishing the job this week.

Mohammad Javad Zarif, in talks in Switzerland with US Secretary of State John Kerry since Monday, said other foreign ministers from world powers involved in the negotiations were unlikely to join them for now.

The arrival of the foreign ministers of Russia, China, Britain, France and Germany in Lausanne -- joining their political directors -- could indicate that a long-elusive deal might be at hand.

"I don't think their presence will be needed in this round," Zarif told Iranian state media from the Swiss lakeside city.

"When the solutions are found and we approach a deal, then all the foreign ministers of the negotiating parties should come," he said.

As a result the negotiations will likely have to continue into next week or resume then after a break.

Iran and the six powers have been seeking in months of talks to transform an interim deal struck in November 2013 into a lasting accord that they hope will convince the world that Iran is not about to develop nuclear weapons.

Such an agreement would involve Iran scaling down its nuclear activities to within strict limits in exchange for relief from painful sanctions after 12 years of rising tensions over its atomic programme.

Two earlier target dates last July and then again in November were missed, but experts say that the new deadline -- 31 March for a framework deal, 1 July for the full deal -- has to be met.

It is, however, far from certain that they will manage to get a deal, with both sides warning of disagreements on key issues, principally the future size of Iran's programme and the timing of easing sanctions.

On Tuesday the White House said the chances of such a deal are 50/50 "at best" with "some of the most difficult issues... yet to be resolved."

Zarif said on Wednesday that "there are differences and we are trying to reduce them".

On Tuesday, Iranian nuclear chief Ali Akbar Salehi, also in Lausanne along with US Energy Secretary Ernest Moniz, had said "90 percent of the technical issues" have been agreed.

Technical aspects are however only part of what would be a highly complex "Rubik's Cube" agreement and Washington has consistently driven home that all the interlocking parts have to fit together.

Salehi said on Wednesday that "progress" had been made and that he was "optimistic". It was unclear whether negotiators would have to return next week, he said.

"We don't know yet, we still have two days to go," he told reporters as he strolled by Lake Geneva.

He also said that the "framework" being targeted by March 31 would cover "general issues".

Opposition to a deal

Critics in the United States and Israel, whose hawkish Prime Minister Benjamin Netanyahu was re-elected on Tuesday, fear that the mooted deal will not go far enough.

They say that leaving some of Iran's nuclear infrastructure in place -- which would likely happen -- does not completely cut off Iran's ability to build a nuclear weapon.

Iran, whose relations with the West have thawed slightly since the 2013 election of President Hassan Rouhani, says its nuclear drive is entirely for peaceful purposes.

In recent weeks US President Barack Obama has had to deal with opposition Republicans inviting Netanyahu to speak in Congress and penning a letter to Iran's leaders.

His administration is also fighting to stop the Republicans bringing new legislation that would force him to submit any deal to a hostile Congress for approval.

"The sooner Obama can bring back an agreement that meets US policy goals, the better," Arms Control Association analyst Kelsey Davenport told AFP. 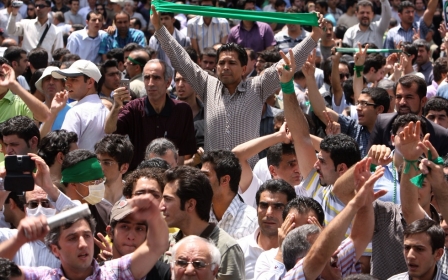