Iran nuclear deal challenged in the US, promoted abroad “Until it stops funding terror, and illicit weapons programs, it should be treated like the global menace that it is," said Congressman Ed Royce at a hearing (MEE/Molly McCluskey)
By
Molly McCluskey

WASHINGTON - Questions about whether the American people were misled in the details and benefits of the Iranian nuclear deal persist as a series of hearings focus on the language used to promote the deal at home and abroad come amid increased scrutiny that the White House heralded the deal as a success for American diplomacy.

A congressional hearing on Tuesday morning of the House Committee of Oversight and Reform follows controversial statements that Deputy National Security Adviser Ben Rhodes made in an interview with New York Times Magazine, which implied the narrative surrounding the deal was largely manufactured, the epitome of Washington spin. It comes during an increased push from the US State Department to encourage trade in Iran abroad (while still curtailing it in the United States) and as the International Monetary Fund heralds an improved economic climate in the Middle Eastern country.

Iran agreed to curtail its nuclear programme in exchange for the lifting of international sanctions that have hobbled the Middle Eastern country’s economy, and release tens of billions of dollars previously frozen in international banks back into Iran’s coffers. A recent US Supreme Court decision earmarked $2 million of those recently released funds for reparations to the victims of Iranian-sponsored terrorist acts. The deal did not, however, remove sanctions for terrorism-related activities, human rights offences, or the development of ballistic missiles.

“Iran is still the world’s leading state sponsor of terrorism,” House Foreign Affairs Committee Chairman Ed Royce, a Republican from California, said during a hearing of the House Subcommittee on Foreign Affairs convened on Capitol Hill Thursday entitled “Terrorism, Missiles and Corruption: The Risks of Economic Engagement with Iran”. “Until it stops funding terror, and illicit weapons programs, it should be treated like the global menace that it is.”

In a meeting with European bankers, US Secretary of State John Kerry said that with the proper checks and balances, there was nothing to fear from doing business with Iran. And the International Monetary Fund (IMF) says that the economic outlook has improved, with higher oil exports, lower trade costs, and foreign exchange reserves.

David Lipton, a senior official of the IMF, visited Iran this week. According to an IMF press statement, after meetings with ranking members of the administration, he said, “In recent years, the authorities have made considerable progress in restoring macroeconomic stability under difficult circumstances. Inflation has declined from 45 percent in 2013 to around 8 percent recently, the foreign exchange market has stabilised, and some key reforms have been implemented.”

Critics, including those at the congressional hearing, say those reforms are not enough.

Iranian officials have complained that the US has not lived up to the terms of its nuclear deal. Opponents claim that the US has made too many concessions, and that it will be much harder to reintroduce sanctions once they have been rolled back. And several bills, including the United States Financial System Protections Act, introduced by Royce, aim to curb Iran’s ability to participate in the global market. The legislation would prohibit the US dollar to be used to in financial transactions with Iran, and upholds Iran’s designation as a heightened money laundering risk.

Another bill, Preventing Iran’s Access to United States Dollars Act of 2016, sponsored by Illinois Republican Peter Roskam aims to prohibit certain transactions with the government of Iran, and to impose sanctions if violated. (The website Govtrack, which tracks bills through the US Congress, gives the bills a five percent chance of being enacted into law.)

“If Iran objects the administration bends over backwards to accommodate,” Royce said. “Effectively, the Supreme Leader now holds the veto pen over future Congressional action. Iran will keep pushing until the Obama administration stops rolling over.”

“The nuclear deal did nothing to address the full range of Iran’s illicit activities, including ballistic missile development, support for terrorism, regional destabilisation and human rights abuses,” Mark Dubowitz, the executive director of the Foundation for Defense of Democracies, a small, pro-Israel DC-based think tank that has actively campaigned against the Iranian nuclear deal said during his witness testimony at Thursday’s hearing.

Juan Zarate, the chairman and senior counselor of the Center on Sanctions and Illicit Finance (CSIF) at the Foundation for Defense of Democracies, and chairman and co-founder of the Financial Integrity Network, was the second of three witnesses at the hearing on the Hill.

“Ultimately, what we negotiated and promised was reintegration of Iran into the global economic system,” Zarate said during his testimony. “Beyond simple sanctions relief, we negotiated away one of our most important tools of statecraft - the very financial and economic coercion that helped bring the Iran regime to the table.”

John Hannah, a senior counselor for Foundation for Defense of Democracy, also testified at the hearing on White House narratives of the Iran deal Tuesday morning.

When asked about the selection of witnesses, and whether the sources of funding for Foundation for Defense of Democracies should have been disclosed during the hearing, a committee spokesperson told Middle East Eye, “No members of the committee expressed any concern to the chairman about the witnesses scheduled for last Thursday’s hearing prior, during, or after the hearing. As a former top White House official, Zarate is widely respected, on a bipartisan basis.”

“The Obama administration has – and will continue to have – ample opportunity to make its case to the committee for this flawed nuclear deal,” Audra McGeorge, the communications director for the Committee on Foreign Affairs, told Middle East Eye. 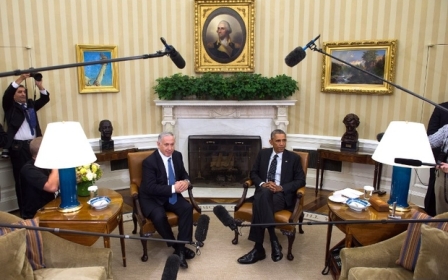