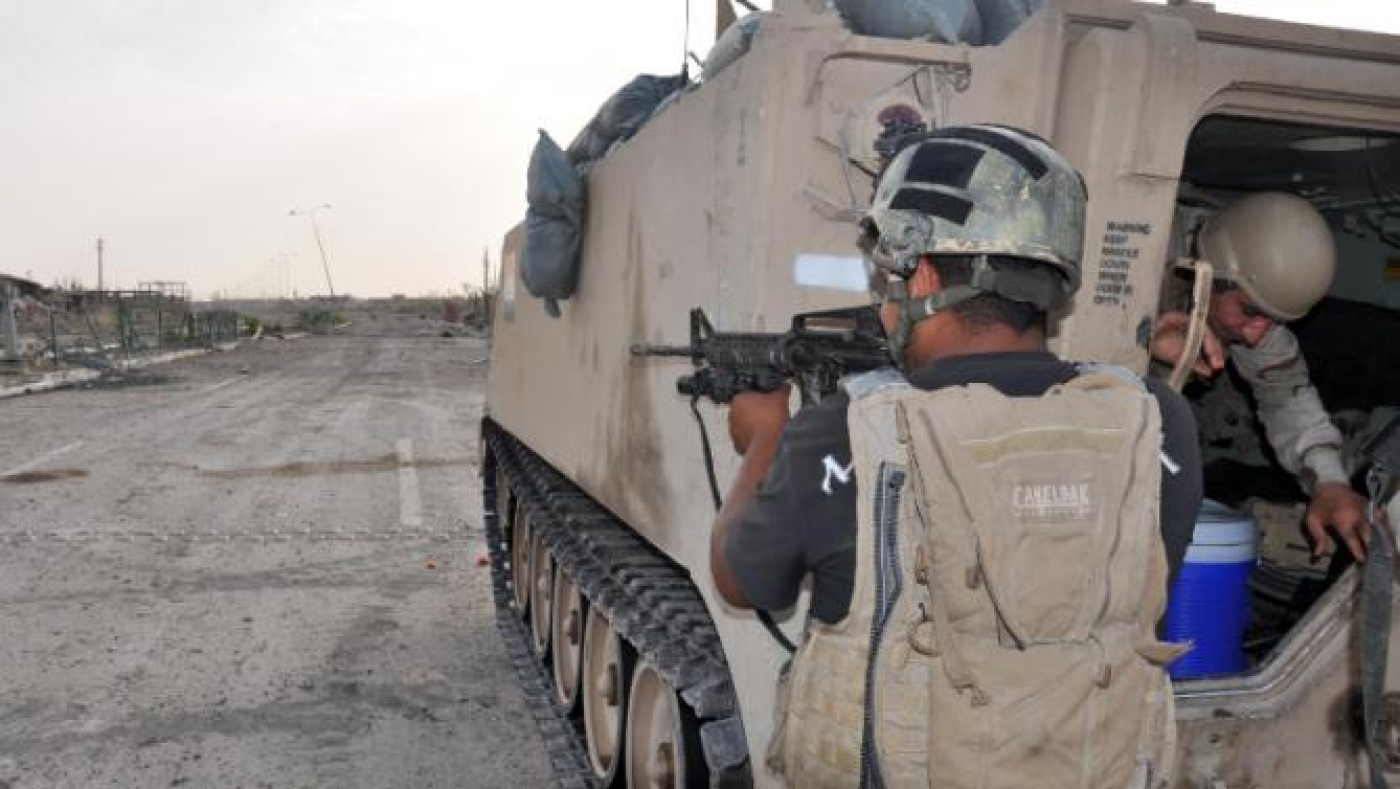 Iraqi government forces stand guard next to a tank on 24 June, 2014 in the western city of Ramadi (AFP)
By
MEE and agencies

Iraqi forces retook an area west of Ramadi on Saturday as they pressed their operation aimed at sealing off Islamic State (IS) militants who captured the city two weeks ago, commanders said.

"The Iraqi army and the Hashed al-Shaabi liberated the Anbar traffic police building in the 5K area west of Ramadi after a fierce fight," an army officer said.

Hashed al-Shaabi ("popular mobilisation" in Arabic) is an umbrella for mostly Shiite militia and volunteers who have played a key role in Iraq's fight against the Islamic State group.

"The battle forced IS to withdraw from the building, which they had used as a base, and pull back into Ramadi city," the officer told AFP.

Iraq forces have launched wide operations aimed at severing the supply lines of IS who control most of Anbar, a vast Sunni province in western Iraq of which Ramadi is the capital.

"The security forces today are tightening their stranglehold on Ramadi, from the traffic police building to the west, from the university to the south and from the other sides too," Anbar police chief Hadi Rzayej said.

He said ordnance disposal teams were busy removing roadside bombs and checking buildings for booby traps in reconquered positions on the outskirts of Ramadi.

Iraqi government and allied forces retook the southern districts of Taesh, Humeyrah and the Anbar university compound earlier this week.

An army colonel said IS unleashed eight suicide car bombs on a military base in eastern Anbar on Saturday. Forces equipped with anti-tank systems were able to stop all of them, he said.

"Army forces managed to repel a Daesh (IS) attack involving eight vehicle bombs driven by eight suicide bombers," said the colonel at the base in Al-Shiha, about 50 kilometres (30 miles) west of Baghdad.

The United States announced after the fall of Ramadi that it was sending 2,000 Swedish-developed AT4 unguided anti-tank weapons to help the Iraqi forces counter the threat of car and truck bombs.

As they attempt to isolate Anbar from other provinces, Iraqi forces have also been fighting in Salaheddin province, whose capital Tikrit was recaptured two months ago but where IS still holds territory.

Federal and Hashed al-Shaabi forces have been making progress in the Baiji area, around 200 kilometres (120 miles) north of Baghdad, which commands access to a key road leading to western Anbar.

IS seized Ramadi on 17 May, using an unprecedented wave of suicide vehicle-borne bomb attacks to force a retreat from the forces that had managed to hold some positions in the city for more than a year.

The loss of Ramadi has further compounded an apparent failure on the part of the Iraqi security forces and Prime Minister Haider al-Abadi to stem the rise to power of IS, which has been making major in-roads into Iraqi territory since first capturing the city of Mosul in June 2014.
Many commentators have also pointed to the failure of either the Iraqi government or the US to lend material support to Sunni tribes in Anbar province, despite their success in driving al-Qaeda out of the province in 2007.
"Prime Minister Abadi ought to take some concrete steps towards ending sectarianism in his country," said Dr Victoria Fontan, Interim Chair of the Politics and Public Policy Department, American University Duhok Kurdistan, writing for Middle East Eye.
"Politically, this means granting autonomy to Sunni areas. Militarily, it is about stopping its illegal military offensive against civilian populated areas. These are two of the possible long-term strategies against the Islamic State."