Islamic State: The enemy that refuses to die

Despite losing territory and suffering economic strife, IS continues to represent a dangerous threat outside areas it controls 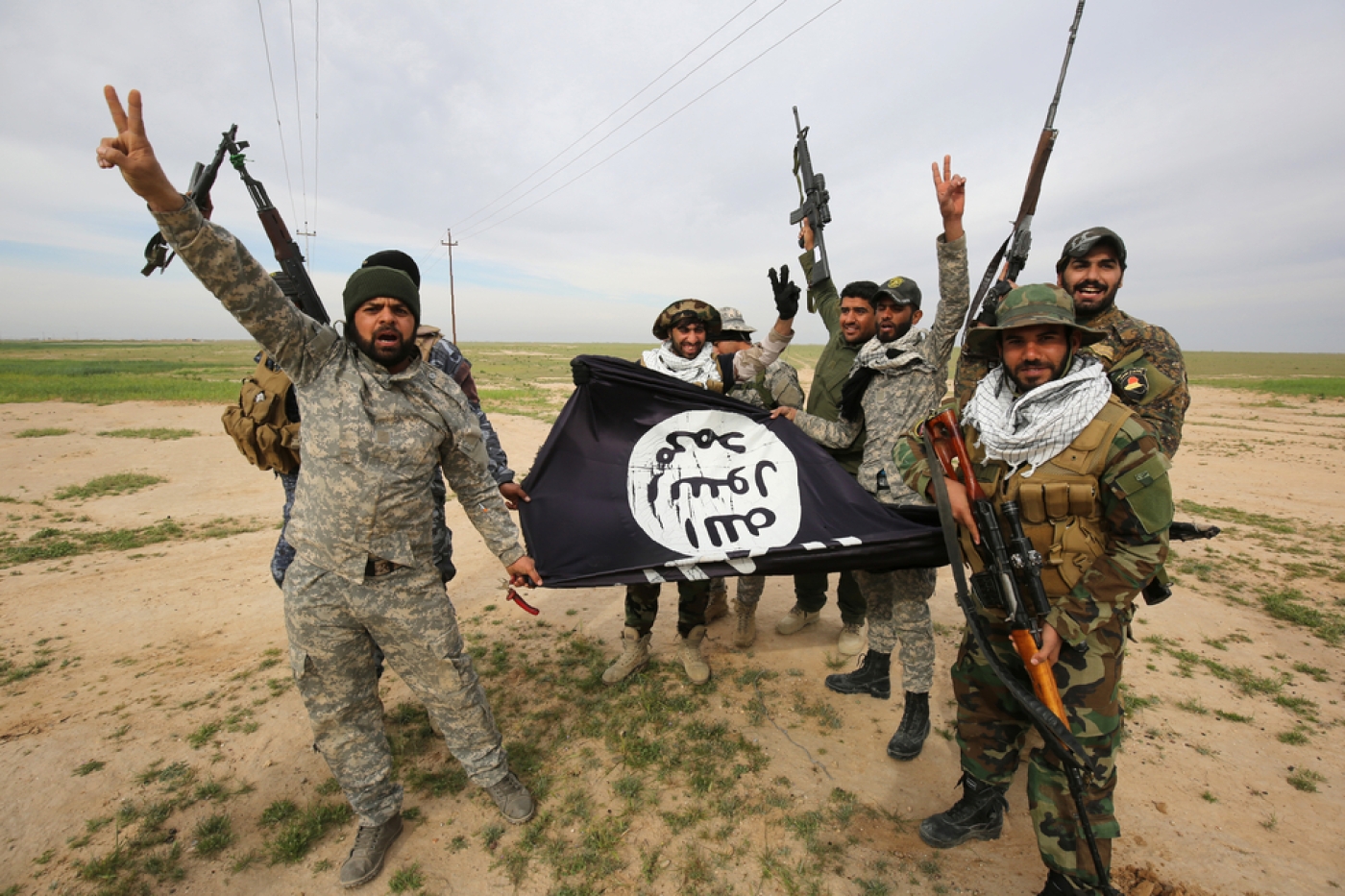 Iraqi Shia fighters pose with an IS flag captured in Samarra, Iraq on 3 March 2016 (AFP)
By
Linah Alsaafin

It is losing territory in Iraq and Syria, is wracked with internal paranoia, faces financial crisis and is beset by enemies from above and on all sides. Everything points, its enemies say, to an implosion and the eventual demise of the Islamic State (IS) group.

This week, reports said IS had killed its Mosul finance minister for "treachery" and that foreign volunteers were being executed for desertion. These and the recent imprisonment of 11 regional leaders have been interpreted by some as indicators of paranoia within the group.

Air forces are queuing up to bomb IS-held territory, US military officials describe it as adopting a “defensive crouch,” and even IS’s shocking propaganda videos are now being dismissed as evidence of decline and desperation.

“I think it is absolutely desperate tactics from an organisation that is clearly now on the backfoot,” said British Prime Minister David Cameron earlier this year after IS issued a video threatening attacks on the UK.

But for all the proclamations, is the self-styled caliphate really facing its downfall?

Hassan Hassan, a fellow at the Chatham House security think-tank and the co-author of ISIS: Inside the Army of Terror, told Middle East Eye there were no signs that internal dissent would bring the group's downfall.

Executions by IS of its own members had been “business as usual” ever since its capture of Mosul, Iraq’s second city, in 2014.

“These reports provide an opportunity to escalate the fight against IS, but I wouldn’t say it is a big deal,” said Hassan.

While many people are unhappy under IS rule and face a worsening economic situation, Hassan said there was little appetite for a rebellion because of the mortal danger involved and fears that whatever came after IS would be no better.

“The consequences are clear,” he said. “The alternative will still be bad: if people expel IS from Deir Ezzor [in Syria] or elsewhere, who do they have instead? The alternatives are as bad, whether that is the Kurds or the Syrian regime or even other rebel groups.

"The same situation goes for Iraq.”

External pressure is certainly there, however. IS continues to face bombardment by the US-led coalition and by Russian air strikes in Syria, while Iraqi forces have kicked it out of parts of Fallujah and Ramadi in Anbar province, with military leaders suggesting that an assault on Mosul could come within weeks.

In January, US military spokesman Steve Warren said the group had been cowered for some time: “May [2015] is when they reached their culminating point of offensive operations. Since then, all they’ve managed to do is lose ground."

A main target by opponents of IS has been lucrative oil fields under the group's control, with the UK estimating that air strikes have reduced oil revenues by 30 percent and the group’s overall income by 10 percent, as well as helping to shrink IS territory by about a third.

Analysts say even those figures may understate the damage dealt to the group's finances, with recent reports of fighters having their pay halved and residents complaining of food shortages.

In a statement published by the group in January, IS listed “exceptional circumstances” to justify the cut in salaries.

Foreign IS fighters in Syria, who are paid double their Syrian counterparts, had their monthly income cut to $400, the Syrian Observatory for Human Rights reported.

“Its oil sources in Mosul and Raqaa have been subjected to a process of drying out, which means it is unable to export,” Abdel Bari Atwan, the editor-in-chief of the Arab website Rai al-Youm, told MEE.

“Another income source that has also been affected is the selling of antiquities to international sellers, which has diminished significantly.”

A change of tactics

But Atwan said that even though it is hurting financially and is in retreat in some areas, IS remains a formidable opponent on the battlefield because of its ability to adapt tactics and wage both offensive and defensive operations.

While its initial military strategy had been focused on gaining and consolidating territory, that strategy was now evolving to include insurgency tactics once used by its forefather, al-Qaeda in Iraq.

“Its defeat in Ramadi was a huge loss but the city was never a much of a prime location for IS,” he said.

“With all the pressures it faces, IS has started using terrorist operations.”

Atwan’s analysis is echoed by the Soufan Group, a security intelligence organisation, which warns that in light of a deteriorating military situation, IS will escalate its efforts to ignite sectarian tensions in Iraq by targeting Shias.

“In the face of increased military pressure, the so-called Islamic State is using suicide bombers in Iraq in the hopes of initiating an escalating series of violent reprisals, thus triggering a broader sectarian war,” it said.

Hassan Hassan said the strategy mirrored that used by militants during the “post-Iraq insurgency” era between 2005 and 2010, when al-Qaeda attacked areas beyond its control.

“Generally speaking, the organisation is shifting its tactic towards a more offensive attack fought outside its territories,” Hassan said.

“Because the air campaign has restrained IS in some areas, it has had to think of a new strategy. The sense I get is that they feel stable. They don’t feel there is [a threat from] imminent internal dissatisfaction.”

Meanwhile, as it contracts in Syria and Iraq, IS is putting down new roots in Libya, and is seemingly set on dragging Western powers into a resource-sapping and controversial military intervention amid fears that the creation of an IS statelet on the southern shores of the Mediterranean could see the group establish its own people-trafficking routes to Europe.

The head of the Special Deterrence Force in Libya previously told MEE that IS’s expansion and control of a stretch of Libya’s coastline around the city of Sirte posed a great danger to Europeans.

“If they get their hands on an active trafficking route, anything can happen,” said Abdoulraouf Kara.

Atwan said it was hard to measure whether IS was still gaining ground or losing it, noting that even as it faced defeat in Ramadi, it was securing territory and attracting thousands of fighters to Libya.

“A year ago, it did not have a state in Sinai, or in Sirte, or in south Libya, or Derna, or in Pakistan and Afghanistan. Jordan for the first time earlier this week had to foil an IS-planned attack within its own land,” he said.

“IS has started to transfer the battle scene to the lands of its enemies.”

As for the thoughts of the leadership, an audio recording released in December apparently from "caliph" Abu Bakr al-Baghdadi stated that the group was steadfast and expanding across the Middle East and Africa, and that its ultimate goal - a final decisive battle against its enemies - was at hand.

1. So far, new statement from #IS leader #Baghdadi is more of the usual - everything is great in the caliphate, the Final Hour is impending.