Many IS spouses are held in Syria camp after husbands killed or arrested while trying to flee from Raqqa. Now they want to go home 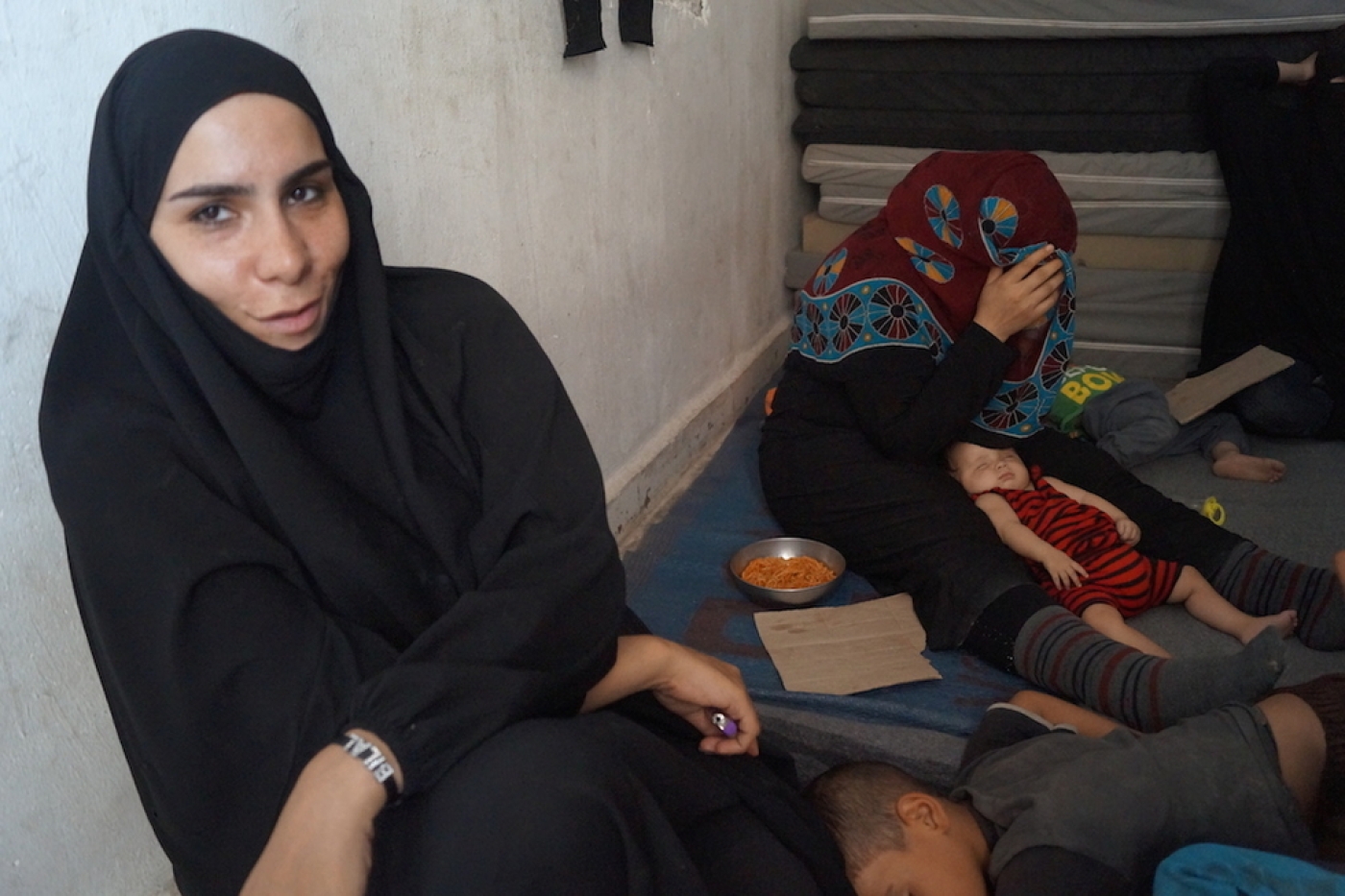 AIN AL-ISSA, Syria – At a camp for internally displaced people near Syria’s northern border, 14 women, each of whom has several young children, share a dorm.

The camp in Ain al-Issa is referred to informally as a five-star camp with its own medical facility, stalls selling second-hand clothing, shops selling food and refreshments, and rows of white tents, supplied by the UNHCR.

The camp is providing temporary accommodation for 8,000 Syrians, those who fled the long-awaited battles against the Islamic State (IS) group, led by US-backed Syrian Democratic Forces, in Raqqa and Deir Ezzor.

Everything the media writes about us is negative, but no one asks me about my husband, whom I love

But this particular dorm is not like the rest of the camp. With security guards at the door, its 14 adult inhabitants, many of them foreigners, are all the wives of IS members.

Many of their husbands have already been killed in battle, or arrested alongside their wives while trying to flee from IS-held Raqqa.

Some of the women were captured in the streets as the SDF liberated areas from IS control.

The rest of the camp’s inhabitants aren’t too happy with the presence of the IS wives among them.

“They hate IS and they suffered in Raqqa,” says Aisha Kadad, 30, a former English teacher from the central Syrian city of Homs.

“When the Indonesians were living here, the locals were throwing stones, and did not allow them to get water,” she says, referring to a family of suspected IS members who lived in a tent within the camp, not in the dorm itself.

Kadad's first husband was killed by a Syrian army sniper during the fighting in Homs in 2012.

“Everything the media writes about us is negative, but no one asks me about my husband, whom I love,” Kadad says.

Her second husband, a French-Moroccan named Bilal Khattab, originally joined IS not wanting to fight, she says. It’s unfair, she adds, that she is still being held in captivity. She wants to be free, and to be able to leave the camp and go back to work in Syria.

The wives have few visitors, save for the odd journalist.

And while many bemoan their situation in the camp - Kadad complains that they are only fed "rice and beans" - they are allowed to leave the dorm unaccompanied to buy food and supplies in the on-site market and sometimes are even granted internet access, enabling them to talk to their families back home.

Many of the wives say they were initially interrogated by the US-led coalition, before being handed over to the local SDF forces.

And most say they hope to be allowed to return to their home countries in order for their children to live in peace.

Kadad says her husband came to Syria from France to join IS, but did not want to fight, and refused to take up arms.

Abu Mohammed al-Adnani, the chief propagandist of IS, personally told him he "either had to fight or stay," she recalls.

“I am a Muslim, but I don’t want to kill,” he told his IS superiors, she explained.

Since they did not have money to flee to Turkey, and also feared punishment for refusing to fight, the couple decided to stay put until they could see a chance to escape from IS.

Her husband was forced to cut his long hair, she says, identifying him as a member of IS to outsiders.

After her husband was released from prison for smoking a few months ago, they managed to escape from IS-held Raqqa, and with a white flag approached SDF forces in a nearby village.

She complained that he has not been released yet and is most likely in Kobani or in Qamishli, both controlled by the Kurdish YPG militia.

“Many Syrians with IS were released, after spending some time in prison. My husband is not Abu Bakr Baghdadi,” she says. “He did nothing wrong.”

However, it seems the SDF did not believe her story that her husband was not an IS militant, and imprisoned him.

Beheaded for smuggling family out of Raqqa

Kadad says it was difficult to leave the territory controlled by IS.

“One day in the square of Raqqa, they beheaded an Iraqi man because he smuggled his wife and daughter to Turkey. They killed him for allowing his wife to go to kuffar [non-believers] land. We were very afraid if they would catch us, and our children, we would all be killed,” she says.

Unlike most of the IS wives, Kadad, who is Syrian, does not want to return to Morocco with her husband.

“I am afraid they will send my husband to Morocco, and that he will be tortured, because they hate IS very much there,” she says.

However, most of the IS wives want to return to their home countries.

“We would allow them to leave if others accept their return [foreign governments],” one anonymous security official in the camp said.

However, he said the IS husbands were not allowed to leave Syria.

“In America they would imprison them, but here they [wives] are not even in prison,” he added.

A family of 17 Indonesians was allowed to leave at the beginning of August after the government in Jakarta accepted their return.

Also a French IS wife, Saida from Montepellier, returned to France, the wives say.

Many Western governments are reluctant to take back the wives of IS members, but they do not legally have the option to refuse their return, as they remain citizens.

Clarisse Pasztory, the head of the European Union mission in Erbil, in the Kurdistan region of Iraq, says it is most likely the IS wives will be prosecuted in their home countries.

“We are happy to see them prosecuted locally, with the general opposition against the application of the death penalty well noted,” she told MEE.

“But then there may not be enough [evidence] to prosecute them or no crime as such committed locally at all, if they were 'just wives',” she said.

“In that case they will likely get deported from here but that doesn't mean they go free, as upon arrival in Europe they will be charged with and prosecuted for joining a foreign terrorist organisation  - if they did,” she told Middle East Eye.

However, she added that every Western country has a different penal code and procedures, so individual cases may vary.

“Children are a different thing, as l said. Every country will want and have to seek to get their nationals out, and unless they committed serious crimes they are likely to be handed over. The next steps then will depend on family situation, state of mind and what not,” she added.

Fatima is 30, and originally from Germany. She chose not to give her real name.

Having lived in Raqqa with her husband, who was injured in the battle to retake the city, she now wants to return to Germany with her children.

She said she came to IS-controlled areas "because of Sharia [Islamic law].

I am going crazy, how long do I have to stay here? I need to return to Germany

“I did not come for IS, I was a house wife. I have nothing to do with the cutting of heads, and stoning,” she said, denying she knew IS was killing innocent people.

“I am going crazy. How long do I have to stay here? I need to return to Germany,” she says, almost breaking down in tears about the living conditions in the camp.

Shouting at the security officials in the dorm, she starts losing it – saying she either wants to be allowed to go to Germany, or to return to Raqqa, where her husband, injured in the fighting, remains with IS.

There are also IS wives from countries in the Middle East, including Turkey, Tunisia and Morocco.

She is desperate to return home, she says, and regrets joining IS.

Humri vows to denounce IS if that means Tunisian authorities will allow her back into the country.

“My husband also said that the caliphate is not even religious, even though they claim to be divine. He said we had to leave at the earliest opportunity,” she says.

No one likes the Islamic State, it’s a state of non-believers, and that’s why it lost

“Some Tunisians planned to escape IS [in Mayadeen], stole cars in Raqqa, collected money and gave it to a smuggler to escape,” she adds.

“I want to go back to my family and my old life I used to live,” she says. IS wives, she says, are treated badly, and especially once they are widowed, and forced to remarry another IS fighter.

“If her husband was killed, women were treated like dogs, and nobody cares about them. No one likes the Islamic State, it’s a state of non-believers, and that’s why it lost. If they had God on their side, they would have won,” she adds.

“I am not with Daesh, I came here to Syria to obey my husband,” she stated.

Habiba Afif’s husband was killed by coalition strikes in Raqqa, she says.

She wants to return home to Morocco, and has contacted her family online to ask them to contact the Moroccan authorities.

My husband stayed two years with IS, and then he was killed by air strikes, I have young kids and am tired, I want to go back to my country

“My husband stayed two years with IS, and then he was killed by air strikes, I have young kids and am tired, I want to go back to my country,” she says.

“Life was very difficult under Daesh. It’s not a good state, there was constant bombardment by planes in Tabqa,” she says.

“I want to go back to Morocco and start a new life,” she adds.

Now that IS is gradually losing all of its cities to either Iraqi forces or the SDF, it’s expected that more and more IS wives and their children will be captured.

A new legal challenge faces the authorities, both locally and abroad, for many of these children were born in Syria, under IS control, and determining the extent of the wives' involvement in IS crimes is far from straightforward. 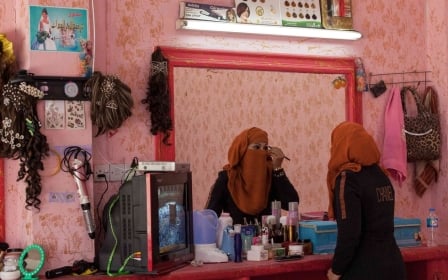 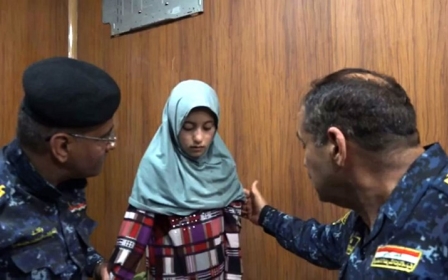