Chadian President Idriss Deby, in power since 1990, met with Premier Benjamin Netanyahu in Israel in November (Reuters)
By
MEE and agencies

Israel and Chad have renewed diplomatic ties decades after they were ruptured, Prime Minister Benjamin Netanyahu announced on Sunday during a visit to the African state.

Netanyahu and Chadian President Idriss Deby have "announced the renewal of diplomatic relations between Chad and Israel," a statement from the Israeli premier's office said.

Ties between Israel and the Muslim-majority nation were broken in 1972.

Speaking in a joint news conference in N'Djamena on Sunday, Deby told Netanyahu that he welcomed him to the country and wished him a pleasant stay.

"The purpose of your visit is to bring our two countries closer and to cooperate," Deby told the Israeli leader.

Netanyahu said that Israel was announcing today "a renewal of diplomatic ties with Chad and making a breakthrough for the Arab and Muslim world".

The premier said the restoration of diplomatic ties was "a result of strenuous work of recent years" and that, together, he and Chad's president were "making history".

Netanyahu has recently sought to improve ties with countries in the Arab and Muslim world and said he expected more such diplomatic breakthroughs soon.

Deby, who has been in power since 1990, visited Israel and met with Netanyahu in November.

In July 2016, he hosted the then-director of Israel's Foreign Ministry, Dore Gold, for exploratory talks on improving bilateral relations.

Gold told Israel Radio in November that his Chadian hosts told him they had cut off ties in 1972 under Libyan pressure, a factor removed with the toppling and subsequent killing of longtime Libyan leader Muammar Gaddafi in 2011.

During his visit to Israel, Deby said unofficial contacts between Israel and Chad had been ongoing for an extended period.

One source told the Reuters news agency that the November visit focused on security, adding that Israel had supplied Chad's army with weapons and other equipment in 2018 to help in its fight against rebels.

Chad is one of several African states engaged in Western-backed operations against Boko Haram and the Islamic State group.

Deby won a disputed fifth term in April 2016 to lead the country of some 15 million people. 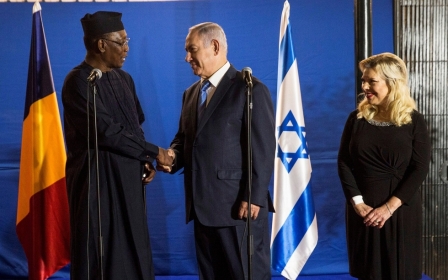