Israel’s Palestinian minority is preparing to hold a “day of rage” to protest against a court ruling last week that cleared the way to destroying an entire Bedouin village so that it can be replaced with a Jewish town.

The Israeli Supreme Court’s decision marks the end of a 13-year legal battle by the 800 villagers of Umm al-Hiran in the Negev (Naqab) to prevent the establishment of the town on the site of their current homes.

The new town – also to be called Hiran – is expected to include 2,500 homes designated for ultra-nationalist religious groups closely identified with the settler movement.

Bedouin leaders and human rights groups criticised the judges for upholding what they termed “racist” government policies that gave weight solely to the housing needs of Israel’s Jewish population.

Fadi Masamra, director of the Regional Council of the Unrecognised Villages (RCUV), a body representing dozens of embattled Negev communities like Umm al-Hiran, said the village’s destruction would be viewed as a major assault on Bedouin rights.

“This is as clear a case of ethnic cleansing as one could imagine – and the courts have given their assent,” he told Middle East Eye. “The government is determined to clear us from as much of our land as possible and force us into ghettoes.”

There are widespread fears that the ruling will reopen the door to controversial legislation requiring the destruction of 36 Bedouin villages in the Negev the state has refused to recognise.

The Prawer Bill was put on hold by Benjamin Netanyahu’s right-wing government 17 months ago following mass protests by the Palestinian minority, which comprises a fifth of Israel’s population.

Tens of thousands of Bedouin face being uprooted and forcibly moved into a handful of government-planned towns in the Negev that are classed as the most deprived communities in the country.

The far-right Jewish Home party insisted on the legislation’s revival as a condition of its entry into the government coalition this month. One of its leaders, Uri Ariel, a settler in the occupied territories, was made minister in charge of Bedouin affairs.

In a sign of the increasing pressure being exerted on Bedouin communities in southern Israel, government officials demanded in a separate court case last week that dozens of families from another village, al-Araqib, be billed $500,000.

The sum is to cover the cost of repeatedly demolishing their homes. The villagers have resisted government efforts to evict them by rebuilding their homes more than 80 times over the past five years.

Umm al-Hiran is one of 46 villages – home to some 100,000 Bedouin – that Israel has refused to recognise since the 1960s, leaving the inhabitants effectively criminalised.

While the Bedouin residents have Israeli citizenship, the state refuses to connect the villages to the water and power grids or provide access roads, health clinics and schools. All homes are under demolition order, forcing many villagers to live in tents or tin shacks.

The Supreme Court ruled last week that the residents of Umm al-Hiran had no right to their lands, even while Israeli authorities conceded that they had relocated the tribe to the dusty hills of the eastern Negev six decades ago. The villagers had been left landless in 1948 after the Israeli army destroyed their original homes.

Salim Abu Al-Kian, a 41-year-old resident of Umm al-Hiran who led the village’s struggle through the courts, told MEE: “We are being treated like criminals, even though we were placed here by the state. It seems our mistake is in not being Jewish.”

Maysanna Morany, a lawyer for Adalah, which represented Umm al-Hiran in court, said the judges had established a dangerous precedent by overlooking the social and political context of the case.

“The state did not try to argue, as it usually does, that there were important security or environmental reasons for destroying the village,” she said.

“The land will still be used for housing. But both the government and the court agreed that the residents of Umm al-Hiran should be evicted so that Jews can live in their place. That is clearly a racist policy, designed to promote the state’s Jewish character.”

Bedouin leaders and the Follow-Up Committee, the main representative body of Israel’s 1.5 million Palestinian citizens, are due to meet in Umm al-Hiran on Sunday to formulate a response to the court decision.

The meeting will be held in the shadow of the 15 May commemorations of the anniversary of the Nakba – the Arabic world for “catastrophe” and a reference to the national disaster that befell the Palestinians in 1948 with the loss of their homeland.

Masamra of the RCUV said the court ruling was proof of the Nakba was not over.

The Palestinian leadership in Israel has grown increasingly concerned about severe land and housing shortages faced by the 1.5 million-strong Palestinian minority.

Ayman Odeh, leader of the Joint List, a broad coalition of Arab political parties that is the third largest faction in the Israeli parliament, has made the housing crisis and Israel’s treatment of the Bedouin his top priorities.

In late March he led a four-day protest march from the Negev to Jerusalem, presenting the Israeli President Reuven Rivlin,with a proposal to make all the unrecognised villages legal.

Odeh called the failure to provide Bedouin children with water and electricity “a mark of Cain” on Israel.

Israeli officials have been intensifying their campaign against the Bedouin since 2002, when planning authorities approved the founding of 14 Jewish communities in the Negev as part of efforts to strengthen what was termed “national resilience”.

The authorities have insisted that most of the Bedouin villagers relocate to half a dozen government-planned townships established decades ago.

Liad Aviel, a government spokesman for Bedouin affairs, told the Associated Press that the villagers of Umm al-Hiran had been offered housing a short distance away in Hura, east of Beersheva.

However, Ismael Abu Saad, an education professor at Ben Gurion University in the Negev, told MEE that all the townships lacked basic infrastructure, land for farming and were at the bottom of the country’s social and economic tables.

“The quality of life in these towns is disastrous,” he said. “Poverty and unemployment are sky high, and services are almost non-existent.”

Despite the harsh living conditions in the unrecognised villages, and government pressure to move to the townships, only about half of the Negev’s 200,000 Bedouin have agreed to do so.

In recent years, Israeli authorities have grown increasingly concerned by the steady emigration of Bedouin from the townships back into the unrecognised villages, said Abu Saad.

“Any families who can return to their original villages are doing so,” he said.

“I have pointed out to the planning authorities repeatedly that if you want the Bedouin to stay in the towns, then you have to make it worthwhile to live there. Otherwise people will vote with their feet.”

Bedouin in the unrecognised villages argue that they should be allowed to continue their pastoral way of life as farmers and herders.

The villages are located either on land inhabited by the Bedouin for generations or on sites, as at Umm al-Hiran, to which they were moved after their expulsion from their original land following the 1948 war.

Israel rejects claims by the Bedouin to 800 sq km of the Negev – or about 5 per cent of the area – saying all of the Negev is state land.

Launching a fundraising campaign this week to help bring the Umm al-Hiran’s struggle to international attention, Adalah stated: “The court did not ask why the new town had to replace the Arab village, when there are vast and empty lands in the surrounding area.”

Morany said the court should have taken into account that state was expelling the villagers from their homes for a second time.

The judges had also ignored the decades of discriminatory government policies that had created major land shortages for all Arab communities, she added.

Last month the Palestinian minority staged a one-day general strike to protest a renewed wave of home demolitions and a mounting housing crisis. Thousands took their protest to the streets of Tel Aviv.

At the same time, opposition from Jewish parties prevented Arab MPs from holding an emergency parliamentary session to discuss the housing problems faced by the minority.

A recent report by Adalah argued that housing shortages were “the result of deliberate, consistent, and systematic government policy”.

It noted that the 139 Arab communities recognised by the state had jurisdiction over only 2.5 per cent of Israeli territory after years of land confiscations. By contrast, 93 per cent of Israel was classified as state land, with much of it reserved only for the Jewish population.

Israel’s additional refusal to build a single new Arab community since 1948, and Jewish officials’ domination of the planning authorities, had led to an 11-fold increase in population density in Arab localities.

Further, the report observed, Arab communities had been overlooked in state-authorised construction projects. Of the 40,100 homes built last year, less than 5 per cent were in Arab towns or villages.

Worse, the report stated, a new four-year government programme to build affordable homes across the country did not include a single Arab locale.

Identifying with the settlements

In a dissenting opinion from her two colleagues in the Umm al-Hiran case, Supreme Court judge Daphne Barak-Erez proposed that the villagers be given the option to live in the new town of Hiran.

The Haaretz daily noted, however, that government efforts to reserve Hiran for the national-religious population – who identify closely with the settlement movement in the occupied territories – made that an impractical solution.

The first Jewish families due to move into Hiran are currently living in a temporary community they established in 2008 in nearby Yatir Forest in anticipation of Umm al-Hiran’s destruction. The 30 buildings were erected without permits.

Morany said that, contrary to their treatment of the unrecognised Bedouin villages, the authorities had turned a blind eye to the illegal status of the Jewish community. The homes there have been hooked up with water and electricity.

According to plaques on some of the homes, they have been donated by the Jewish National Fund USA, registered as a charity in the United States.

In a video posted by Adalah online, a spokesman for the Jewish group named Shmuel, who refused to be photographed, stated that he saw no difference between Israel and the occupied territories.

Morany said other videos showed that the families were sending their children to a school in a Jewish settlement a short distance away in the occupied territories.

Abu Al-Kian, of Umm al-Hiran, said the villagers would not give up. “We will continue fighting. We are not leaving even if they destroy every one of our homes.” 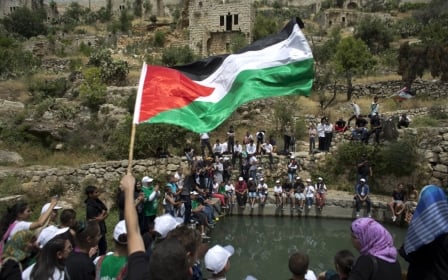