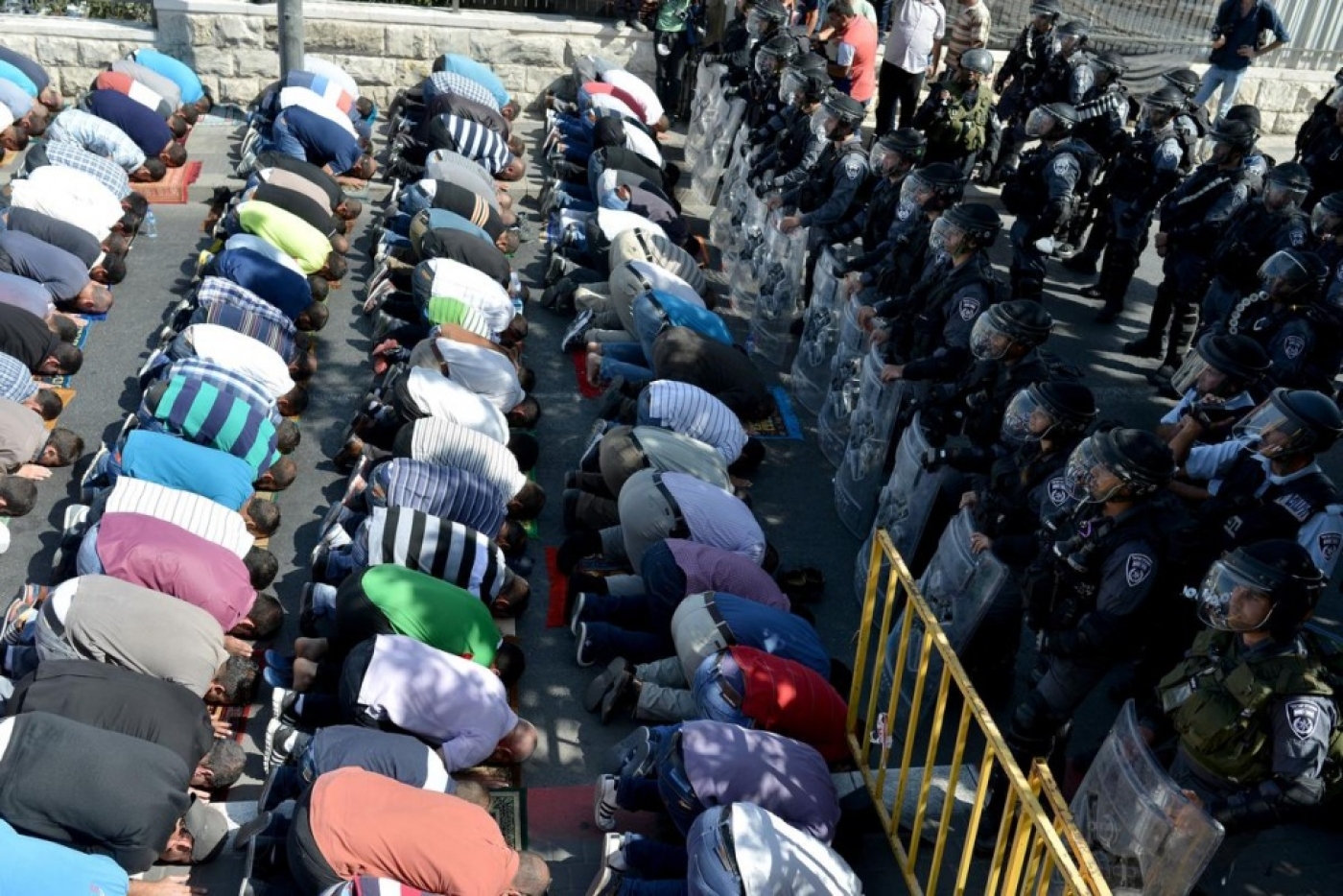 Israeli security forces bar men under the age of 50 from praying inside Al-Aqsa Mosque (AA)
By
MEE and agencies
Israeli authorities imposed restrictions on access to the Al-Aqsa Mosque compound in occupied East Jerusalem for the third week in a row leading to protests on Friday in both the West Bank and Gaza.
Israeli police deployed 1,000 troops and erected roadblocks at Jerusalem's Old City ahead of the weekly Friday prayers.
Under the recently introduced Israeli restrictions, male worshippers under 50 were banned from performing the weekly prayers in the Al-Aqsa Mosque.
"All Muslim men under 50 and West Bankers will be barred from entering the Al-Aqsa Mosque compound for Friday prayers while women of all ages were granted access," Sheikh Azzam al-Khatib, head of the Jordan-run Organisation for Muslim Endowments and Al-Aqsa Affairs, told Anadolu Agency ahead of the prayers.
Al-Khatib said that while Israel restricts the entry of Palestinians into the Al-Aqsa Mosque compound, it has facilitated the access of Jewish settlers into the holy site during Jewish holidays over the past ten days, raising tensions amongst the Palestinians.
At least 1,300 Jewish settlers and 350 Israeli soldiers were allowed in, he said.
"Meantime, Israeli police banned more than 5,000 Muslims from entering the Al-Aqsa Mosque during the same period," he said.
Scores of Palestinians were injured in clashes with Israeli forces inside the Al-Aqsa Mosque compound last week.
In recent months, groups of Jewish settlers – often accompanied by Israeli security forces – have repeatedly "forced their way into East Jerusalem's flashpoint Al-Aqsa Mosque complex," reported Anadolu Agency. These restrictions occasionally lead to violent confrontations.

For Muslims, Al-Aqsa represents their third holiest site, while Jews refer to the area as the "Temple Mount," and claim it as the site of two prominent Jewish temples in ancient times.

In a statement from Doha, Qatar, Hamas leader Khaled Meshaal on Thursday called on Palestinians inside the country to hurry up to al-Aqsa to defend it.
“We call on the nation to be angry and to send a message of painful anger to the world that the Palestinian people, the Arab and Muslim nation, will not be silent at the Israeli crime,” Meshaal said.

Israel occupied East Jerusalem during the 1967 Middle East War. It later annexed the holy city in 1980, claiming it as the capital of the self-proclaimed Jewish state – a move never recognized by the international community.
In September 2000, a visit to the site by controversial Israeli leader Ariel Sharon sparked what later became known as the "Second Intifada" – a popular uprising against the Israeli occupation in which thousands of Palestinians were killed.