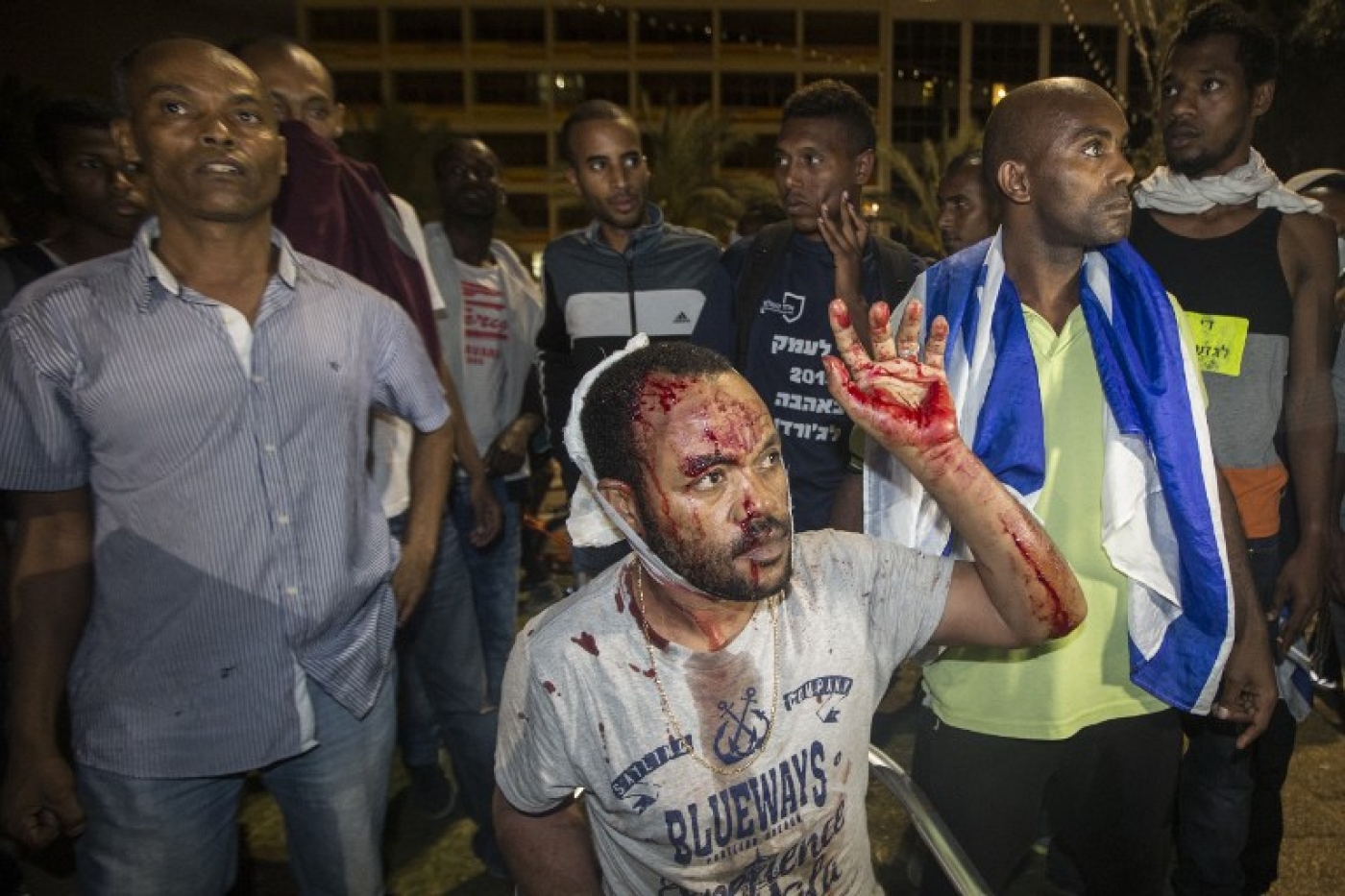 Israel Prime Minister Benjamin Netanyahu has called for unity against racism after talks with Ethiopian Jews on Monday in an attempt to ease tensions after violent clashes broke out in Tel Aviv the night before.

"We must stand together as one against the phenomenon of racism, to denounce it and eliminate it," Netanyahu said in a statement after a three-hour meeting focused on grievances within the community over police brutality and discrimination.

Police said 46 officers as well as at least seven demonstrators were wounded in the clashes, and 43 demonstrators had been arrested following the protest on Sunday.

"We are looking for a real solution to something that has been happening for many years, " said Maharta Baroukh, a member of the Israeli-Ethiopian community and the deputy mayor of Tel Aviv-Yafo municipality.

"If Netanyahu offers a real solution and practical steps regarding discrimination against the Ethiopian community we will cooperate but if it’s just to calm the Ethiopians we will not bow to it," added Baroukh ahead of the talks.

Some protesters felt positive when they left the meeting, saying a new phase may be ahead for Ethiopian Jews.

"Netanyahu promised that police behaviour will change," said Benny Aklom, an Ethiopian Jew who took part in the demonstrations.

"We will now wait and see what the Israeli government and police will do. Otherwise we will go out again," he added, reiterating an end to police brutality, the punishment of the police involved in the assault, and general equality to be given to all Israeli citizens.

Israeli President Reuven Rivlin had admitted on Monday that Israel had made mistakes in its treatment of the Ethiopian Jewish community, describing their suffering as "an open wound".

"We have made mistakes. We did not look, we did not listen enough," he said in a statement after thousands of Ethiopian Israelis took to the streets over allegations of police brutality.

Rivlin said that the protesters had "revealed an open and raw wound at the heart of Israeli society".

Ethiopian Israelis claim their community, which numbers more than 135,000, has long suffered from widespread discrimination.

Some of the demonstrators hurled stones, bottles and chairs from nearby restaurants after attempting to storm the Tel Aviv municipality building.

Internal Security Minister Yitzhak Aharonovitch said dispersing the "riot" was difficult since it had no clear leadership.

"There is nobody to talk to," he told reporters.

Scores of other Israelis also joined Sunday's rally, chanting and holding up signs reading: "A violent policeman must be put in prison" and "We demand equal rights".

As they marched through Tel Aviv, some held their arms up in the air with their wrists crossed as if handcuffed.

Demonstrators earlier blocked the Ayalon expressway during rush-hour, causing huge traffic jams on one of Israel's central highways before police forcefully evacuated them.

"Being black, I have to protest today," 34-year-old Eddie Maconen told AFP before the clashes outside the municipality.

"I never experienced police violence against me personally, but it is aimed at my community which I have to support," he said.

Maconen, who came to the country aged three, said the protesters wanted violent policemen to be put on trial before deeper issues of social inequality were tackled.

"First the police need to be dealt with, then we'll get to all the other (official) bodies that screw over Ethiopians," he said.

One example - I've lived in tons of apartments in Tel Aviv, never had Ethiopian neighbors. Why's that? @davdovich @LahavHarkov

Police estimated 3,000 people took part in the demonstration, while media reports cited organisers as putting the number at 10,000.

Zion Cohen, an Israeli participant, told AFP the Ethiopians were "a hundred percent right" to protest.

"It's a racist country and we don't accept them," he said.

As the rally began, Prime Minister Benjamin Netanyahu released a statement saying that on Monday he would meet Damas Pakada, the soldier who was beaten, as well as other representatives of the Ethiopian community.

"All claims will be looked into but there is no place for violence and such disturbances," Netanyahu said.

According to Baroukh Ethiopians have felt a deep sense of humiliation and discrimination in the Israeli society for many years.

"The previous generation tolerated this, but Ethiopians who were born here [Israeli] are not willing to live with this any longer," said Baroukh.

Economy Minister Naftali Bennett met with protesters at the scene of the clashes and said Israeli society faced "serious soul-searching."

"While the law must be kept, we must all seek the real solutions for the problems that have surfaced in such a painful way," his office quoted him as saying.

Police pledged a crackdown on those members of the force who have used violence against the Ethiopian community after the video footage went public.

But they have struggled to integrate into Israeli society, despite significant government aid.

While Ethiopian Jews have high rates of employment, their average income is lower than that of other Israelis, and they are under-represented in academia and public office.

Officials said that approximately 20 percent of minors held in juvenile prisons were of Ethiopian descent. Inside Israel
Israel warns of terror attack against Jews in Tunisia