Israeli president wades into debate over Islamic call to prayer The bill would see the Islamic call to prayer silenced in East Jerusalem and Israel, but has an exclusion to allow Jewish religious announcements (AFP)
By
MEE and agencies

Israeli President Reuven Rivlin spoke out on Tuesday against a controversial bill that would prohibit mosques from using loudspeakers to summon believers to prayers early in the morning.

The draft law, which sparked outrage around the Arab and wider Muslim world, is set to be submitted for its preliminary reading in parliament on Wednesday.

Its original form was amended last week in order not to affect the sirens that announce the start of the Jewish day of rest at sundown each Friday.

Rivlin on Tuesday hosted in his Jerusalem residence a meeting of religious leaders "seeking to bridge gaps over the issue of the muezzins," the Muslim lay officials charged with calling the faithful to prayer, a statement from his office read.

"I thought that perhaps such a meeting could have an impact on the whole public, and that it would be a shame that a law should be born which touches on the issue of freedom of faith of a specific group among us," he was quoted as telling participants.

"The president believes that the existing legislation on noise levels is able to answer problems arising from this issue, alongside dialogue between the different faith communities in Israel," Rivlin's spokesperson Naomi Toledano Kandel said.

Israeli media reported that after the meeting, Rivlin telephoned finance minister Moshe Kahlon and encouraged him to enable members of his Kulanu faction to vote against the bill.

Sources close to Rivlin and Kahlon would not comment on the reports.

Israeli government watchdogs have balked at the proposed legislation, describing it as a threat to religious freedom and an unnecessary provocation.

Lawmaker Ahmed Tibi, a Palestinian citizen of Israel, has vowed to appeal to the High Court of Justice if the Sabbath siren is excluded from the scope of the bill, on the grounds that it discriminates between Jewish and Muslim citizens.

An Israeli official said the law would apply to mosques in occupied East Jerusalem as well as in Israel, but not to the highly sensitive al-Aqsa mosque compound, Islam's third holiest site.

The bill's sponsor, Motti Yogev of the far-right Jewish Home party, says the legislation is necessary to avoid daily disturbance to the lives of hundreds of thousands of non-Muslim Israelis.

He also charges that some muezzins abuse their power in order to incite hatred of Israel.

In a Sunday phone call, Rivlin told Turkish President Recep Tayyip Erdogan that Israeli legislative initiatives pertaining to prayers would be "considered with sensitivity, as any matter of freedom of speech and religion should be".

Also on Wednesday, parliament will vote on a bill to legalise thousands of West Bank settler homes built on private Palestinian land.

Israel currently considers such homes to be illegal, while the international community considers all settlements, including those authorised by the Israeli government, illegal. Inside Israel
Back on the table: Israel's bill to silence Muslim call to prayer 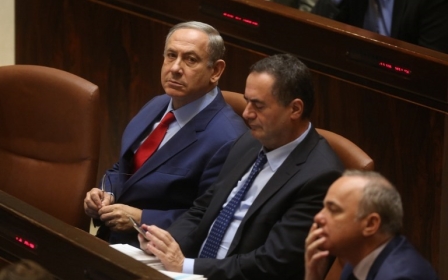