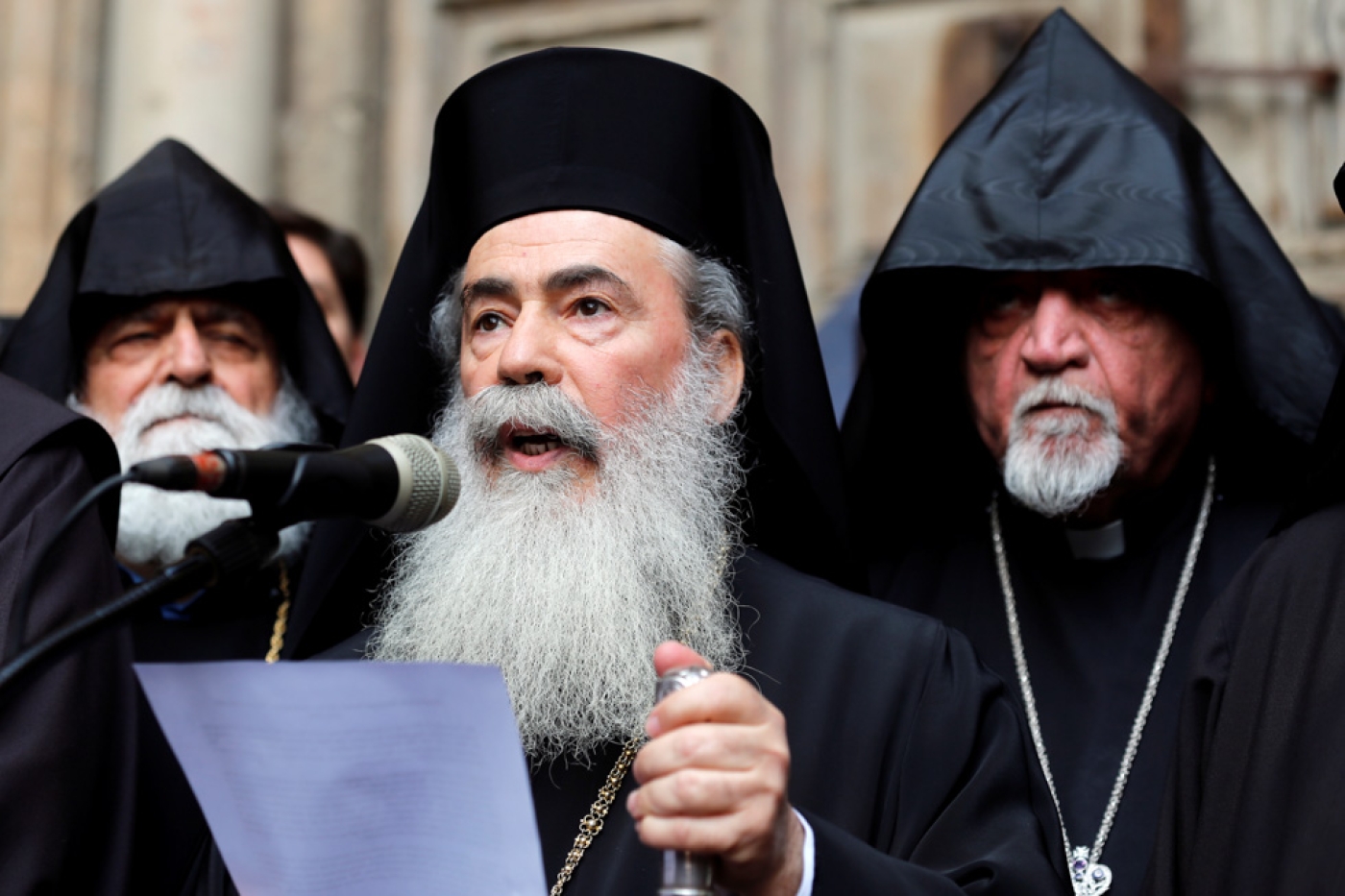 Greek Orthodox Patriarch of Jerusalem, Theophilos III, speaks in front of the Church of the Holy Sepulchre (Reuters)
By
MEE and agencies

Church leaders in Jerusalem shut the Church of the Holy Sepulchre on Sunday in protest at a new Israeli tax policy and a proposed land expropriation law which they called a "systematic and unprecedented attack against Christians in the Holy Land".

Roman Catholic, Greek Orthodox and Armenian church leaders said the holy site, a popular stop for pilgrims and where many Christians believe Jesus was crucified and buried, would remain closed until further notice.

After the protest move, an Israeli cabinet committee delayed by a week its scheduled consideration on Sunday of a bill that would allow the state to expropriate land in Jerusalem sold by churches to private real estate firms in recent years.

The stated aim of the bill is to protect homeowners against the possibility that private companies will not extend their leases. Rachel Azaria, the lawmaker who sponsored the legislation, said in a statement she agreed to delay the committee's discussion by a week so that "we could work with the churches" to try to resolve the dispute.

We stand united, firm and resolute in protecting our rights and our properties

The Greek Orthodox Church has been criticised for selling large tracts of land to private investors in West Jerusalem, Jaffa and Caesarea, often in secret and without consultation with the current tenants who fear eviction when their leases expire.

However, the churches, who are major landowners in the city, say the law would make it harder for them to find buyers for their land and enable the expropriation of church land.

Control of the Church of the Holy Sepulchre is shared between Catholic, Orthodox and Armenian churches as well as smaller denominations. In a joint statement Theophilos III, the Patriarch of Jerusalem, Francesco Patton, the Custos of the Holy Land, and Nourhan Manougian, the Armenian Patriarch of Jerusalem said: "This abhorrent bill ... if approved, would make the expropriation of the lands of churches possible."

"As a measure of protest, we decided to take this unprecedented step of closure of the Church of the Holy Sepulchre," the statement said.

"Together with all Heads of Churches in the Holy Land we stand united, firm and resolute in protecting our rights and our properties."

According to the Jerusalem Post, MK Azaria said in response to the closure: "I understand that the church is under pressure, but their lands will stay theirs, no one has any interest in taking them from them."

Christian Churches are some of largest landowners in Israel, with the Greek Orthodox Church – the second-biggest landowner in the country – owning the land the Knesset, the Israeli parliament, is built on.

Whilst Israel prides itself on being a protector of Christians in the Middle East, most local Christians are Palestinians who oppose Israel's occupation of the West Bank. This has also caused tensions between Palestinian worshippers and Church leaders who are mostly non-Palestinians.

The Greek Orthodox Church leadership has been the target of protests by its worshippers who are outraged over a long-running scandal involving the sale of prime properties in East Jerusalem to a far-right Israeli settler group.

In addition to the proposed land bill, Israel's Jerusalem municipality has cancelled a tax exemption granted to church-owned commercial properties in the city and has begun to demand back payments from the churches.

"This reminds us all of laws of a similar nature which were enacted against the Jews during dark periods in Europe," the church leaders said.

Jerusalem Mayor Nir Barkat said on Twitter it was illogical to expect that church-owned commercial property, including hotels and retail businesses, would continue to enjoy tax-exempt status.

"Let me make it clear: we are not talking about houses of worship, who will still be exempt from property tax, according to law," he wrote.

Outside the Church of the Holy Sepulchre, pilgrims voiced their disappointment at finding its doors shut.

"I am very upset. It's my first time here and I made a big effort to get here and now I find it closed," said Marine Domenech from Lille, France.