The founder of an Jewish-American organisation that campaigns for Palestinian rights was detained for three hours on Sunday evening at the crossing between Egypt and Israel.

Simone Zimmerman, a Jewish-American activist, was held by Israeli security services at the Taba crossing in northern Sinai for at least three hours on Sunday evening.

Zimmerman, who currently resides in Israel, said on Twitter that she had been asked what places she had visited in the West Bank and what she thought of Israeli Prime Minister Benjamin Netanyahu.

Well, here we go... I’m at the border after a weekend in Sinai and Israeli authorities have detained me and my friend Abby for the last three hours. We are being questioned solely about our political opinions and activities vis a vis Palestinians esp in the occupied territories

The founder of IfNotNow added that among the questions she was asked were: “Why did you come here to work with Palestinians? Why not with Jews?”

IfNotNow opposes the Israeli occupation of Palestinian territories and has pushed to change attitudes among American Jews towards Israel.

It has also opposed anti-Muslim policies in the US, such as Donald Trump's travel ban on citizens from several Muslim majority nations.

"The scariest part of this wasn’t the fear that they would deport us, TBH [to be honest]," tweeted Zimmerman, who returned to Israel following the detention.

"We had teams of people making calls and advocating for us, ready to raise hell. The truth is that for Jews in the Jewish state, we still hold a ton of privilege."

According to Israeli law, any Jew from anywhere in the world can theoretically make "aliyah" and become a citizen of the state. However, an increasing number of pro-Palestinian Jewish activists have been detained or denied entry to the country in recent years.

Last month, American-Jewish activist Ariel Gold was denied entry to the country over her support for the Boycott, Divestment and Sanctions (BDS) movement.

Public Security Minister Gilad Erdan said that he had recommended denying her entry to the country.

"Gold has distributed videos on social networks, in which she harasses IDF soldiers and Border Police officers in Hebron, accusing the soldiers of apartheid and oppression, and that their actions do not conform to Jewish values," he said in a statement.

In January, Israel published a list of organisations blacklisted from the country as a result of support for the BDS movement, which Israel regards as anti-Semitic and committed to the country's destruction. 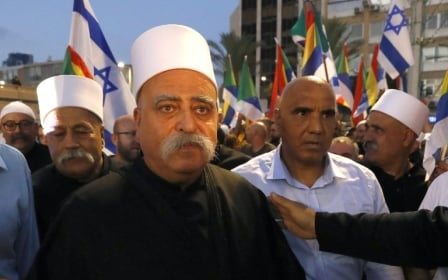