Jordan to participate in ‘train and equip’ programme against IS 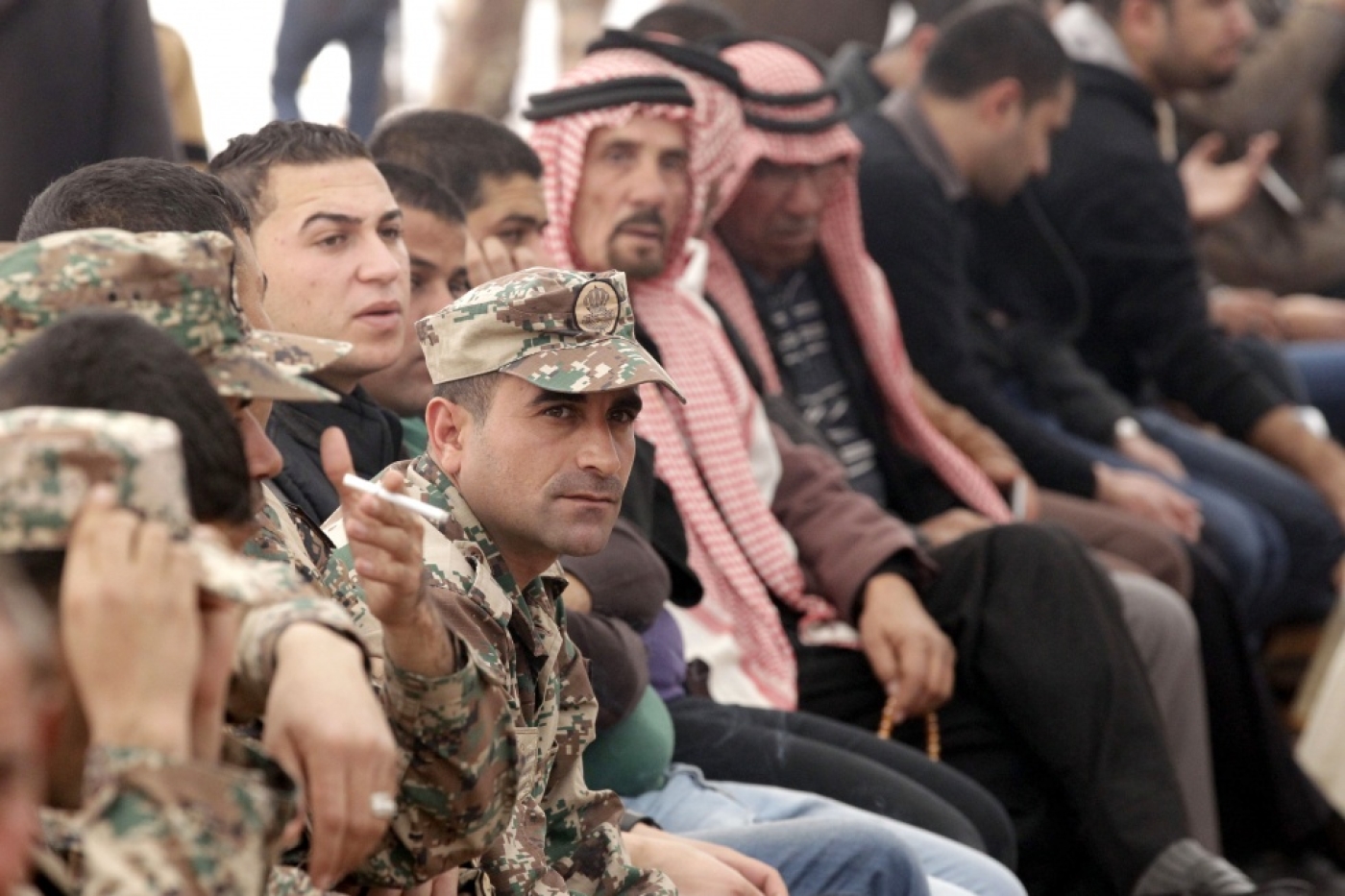 The US-run 'train and equip' programme has been in the works since June 2014, but Jordan’s role has been shrouded in secrecy as key details have been worked out
By
Sara Elizabeth Williams

AMMAN - Jordanian authorities announced Monday that the kingdom would be taking part in the US-funded “train and equip” programme to help vetted Syrians battle Islamic State (IS) militants.

“Jordan and other nations in the coalition and in the region will jointly train ... Syrian tribes to fight against the terrorist bands,” government spokesman Mohammad al-Momani told press at a news conference.

The Pentagon-run programme has been in the works since June 2014, but Jordan’s role has been shrouded in secrecy as key details have been worked out. At the top of the list: which fighters will take part, how they will be vetted, and whether their mission will include taking on forces loyal to Syrian President Bashar al-Assad, or focusing efforts on IS militants.

Monday’s announcement clarified some of these, but raised a series of broader questions about Jordan’s shifting role in a moderate Sunni entente, standing up to extremist militants and seeking to remedy Sunni oppression in Syria and Iraq.

Rather than drawing on the professional and semi-professional fighters currently operating under the US-backed Southern Front rebel group, government spokesman Mohammad al-Momani said Jordan would train fighters belonging to “Syrian tribes”, though he did not specify which tribes.

The mission was also clarified. "Our duty is to support unarmed Syrian people so they can confront Daesh," Momani said, using the Arabic term for the IS group. He added that Jordan was also ready to help train forces in Iraq in their war on extremism.

Southern Front spokesman Issam al-Rayyes confirmed his men had not been tapped to join.

“We haven’t had any invitation or information about this programme, and no one has talked to us about recruiting Southern Front fighters,” he said.

Separately, a high-ranking Free Syrian Army (FSA) source confirmed he had heard from US backers that no FSA fighters would be brought on board: the programme was explicitly for “independents and small groups, inexperienced fighters”.

“If this programme is against Daesh, why should the Southern Front be part of it? It should start from the East, and that means guys from the East,” he said. “And we need our guys to fight against the regime.”

Although no start date was announced, insiders say the programme’s launch is “imminent” after being delayed from a 1 March start date. They also suggested it was likely to be run out of a single location in Northern Jordan.

Amongst those following the events in Jordan, there is a sense that Monday’s announcement is significant not for what was said, but for what this suggests about the kingdom’s shifting role in the region.

Over four years of war, King Abdullah II has maintained diplomatic relations with Damascus even as the Jordan’s security forces have worked with rebels along the border to keep the war out - and allow nearly a million refugees in. Despite a roiling war not two hours away, Amman is calm and life continues as normal.

“Jordan has so far managed Syria well, taking an overtly neutral stance that would be the envy of the Swiss,” said Jordanian economist and former Carnegie Visiting Fellow Riad al-Khouri.

As Jordan’s role in the regional crisis has grown from watchful neighbour and host of refugees to coalition member, it has grown more difficult to balance security interests at home and beyond the kingdom’s borders.

This was thrown into sharp relief in late December, when Jordanian Air Force pilot Moaz al-Kasasbeh was snatched by IS militants in Raqqa, Syria. The pilot’s family charged that this wasn’t “our war” and Jordan had no place in the coalition. Public support for the war wavered, and in hushed voices, some began questioning the decisions that had led here.

When the hostage crisis ended on 3 February with the release of Moaz’s gruesome murder video, Jordanians united in rage and grief, vowing revenge for “Martyr Moaz” and support for their king.

Not 48 hours later, as Abdullah paid his respects to the grieving family, he delivered his revenge: four Jordanian F-16s screaming through the skies over the pilot’s hometown in a victory lap after a successful bombing run in Raqqa.

“Retaliation is part of Jordan’s culture. The king chose to speak to the people and visit them on the day of the retaliation. He made his appearance with action,” said Jordanian political scientist Zaid Eyadat.

Already the lead Arab partner in the coalition, over the following weeks Jordan began to emerge as the lead voice of “moderate Islam”. The king and top-ranking ministers spoke frequently and forcefully about the need to confront extremism, about the illegitimacy of IS and its brand of Islam and the need to destroy this group and its “cancerous” ideology.

“The king has been investing in this cultural foundation to strengthen his place in society. This is also to bolster his political position,” said Eyadat.

And it has worked. Six weeks after Moaz’s death plunged the country deep into revenge mode, Jordan not just maintained its position in the coalition, but angled for greater involvement in the political and military processes shaping the region’s future. But al-Khouri cautioned that this ride could easily end.

“Support for the king is very high right now, but it may not stay that way if Jordan embarks upon ill-conceived military adventures with ground troops north of its border,” he said.

While Monday’s announcement stops far short of ground troops, it’s another step deeper into a regional war with potentially destabilising effects for a country with its own history of militant Islamic extremism.

In matters of power, population and GDP, Jordan is a small regional player, the little brother to Sunni powerhouses Saudi Arabia and Egypt. But geopolitics have skewed the import of size and strength: Jordan is at the centre of the crisis, and it hosts American, French and Emirati guns, planes and personnel.

The Military Operations Command (MOC) centre from which Arab and Western military advisors guide and support vetted Sunni rebels in Syria is in Amman, and a covert CIA-run training programme for FSA rebels has reportedly operated out of the kingdom for more than two years.

Jordan’s import has increased in line with its involvement in the coalition, and as extremist Sunni militants and Iranian-backed Shiite militias face off in Syria and Iraq, many are asking whether the kingdom is angling for the lead role in the nascent moderate Sunni bloc.

Since Moaz al-Kasasbeh’s death, there has been a sharp jump in rhetoric around Sunni oppression. The Jordanian position, as highlighted by Monday’s train-and-equip announcement, focuses on defending Sunnis and ending Sunni oppression throughout the region.

“Jordan believes there is no military solution to ISIS in Iraq and in Syria without empowering the Sunnis,” said Jordanian political commentator Oraib al-Rantawi, using another acronym for IS.

“We can’t leave the mission to Hezbollah, Iranian-backed militias and the [Syrian and Iraqi] armies. It’s also important for Sunnis to be a part of he war on ISIS and to have a stake in the aftermath,” he said.

Al-Rantawi said Jordan’s role in “train and equip” was about “taking the lead in areas where we see an opportunity, where there is a vacancy” and would draw on the kingdom’s experience arming Sunnis in Iraq to take on al-Qaeda between 2005 and 2008. But he insisted there was no appetite to take on Saudi Arabia or Egypt for regional Sunni leadership.

“It’s a Pandora’s Box and we don’t want to open it. We are not in need of such a conflict with our big brothers,” he said. Inside Jordan
What do Jordanians really think about the war on IS?