Jordan's king tells Pence Jerusalem 'must' be capital of Palestine Jordan's King Abdullah renewed concerns over the US decision to recognise Jerusalem as Israel's capital, during high-level talks with US Vice President Mike Pence on Sunday.

Abdullah emphasised to Pence that East Jerusalem had to be the capital of a future Palestinian state and that the two-state solution was the only path to peace between Israel and Palestine.

"The US decision on Jerusalem ... does not come as a result of a comprehensive settlement of the Palestinian-Israeli conflict," the monarch told Pence at the start of the talks in the royal palace in Amman.

Jordan lost East Jerusalem and the West Bank to Israel during the Arab-Israeli war in 1967. Pence was in Amman on the second leg of a three-country tour that concludes in Israel.

In comments delivered in Egypt, he said Washington would support a two-state solution for Israelis and Palestinians if the two sides agreed to it.

Jerusalem is key to Muslims and Christians, as it is to Jews. It is key to peace in the region

It also broke with decades of US policy that the city's status must be decided in negotiations with the Palestinians, who want East Jerusalem as the capital of their future state.

Pence told the king that Washington was committed to preserving the status quo of holy sites in Jerusalem.

"We take no decision on boundaries and final status. Those are subject to negotiation," he said.

Pence's is the highest-level visit by a US official to the region since Trump made his declaration on Jerusalem last month.

Jordanian officials fear Washington's move on Jerusalem has also wrecked chances of a resumption of Arab-Israeli peace talks, which the monarch had sought to revive.

King Abdullah said the US move on Jerusalem would fuel radicalism and inflame Muslim and Christian tensions.

The monarch's Hashemite dynasty is the custodian of the Muslim holy sites in Jerusalem, making Amman sensitive to any changes of status of the disputed city.

"For us, Jerusalem is key to Muslims and Christians, as it is to Jews. It is key to peace in the region," he said.

Jordanian officials are further worried the move could trigger violence in the Palestinian territories and a spillover into Jordan, a country where many people are descendants of Palestinian refugees whose families left their homes after the creation of Israel in 1948.

Earlier this week, Israeli Prime Minister Benjamin Netanyahu in India told reporters that the US embassy will move to Jerusalem within the year. 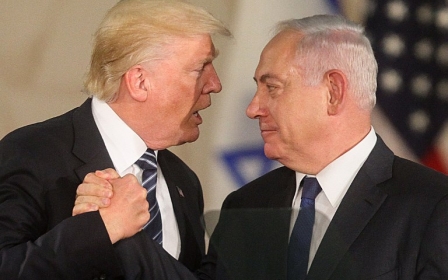