Emir of Kuwait Sheikh Sabah al-Ahmad Al Sabah (C), Kuwaiti crown prince Sheikh Nawaf al-Ahmad al-Sabah (R) and Kuwaiti parliament speaker Marzouq al-Ghanim (AFP)
By
MEE and agencies
Kuwait's emir, Sheikh Sabah al-Ahmad Al Sabah, on Sunday dissolved parliament following tensions between the Gulf state's legislature and government, the official KUNA news agency announced.
"Due to the delicate regional developments and the need to face the dangers of security challenges, it became necessary to go back to the people... to elect their representatives... and contribute to confronting those challenges," he said in a decree.
The move came less than 24 hours after parliament speaker Marzouk al-Ghanem called for snap elections in the face of mounting security and economic challenges.
Ghanem's remarks came after lawmakers filed three requests to grill ministers over a decision to hike petrol prices and over alleged financial and administrative violations, in a clear sign of tensions between the government and parliament.
The emir's decree was issued at the recommendation of the government, which held an emergency meeting earlier on Sunday to discuss the stand-off with MPs.
No date was set for the fresh polls, but early elections must be held within two months of the dissolution of the house under the Kuwaiti constitution. 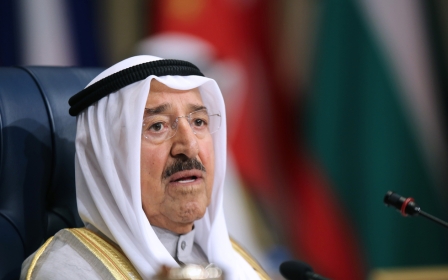