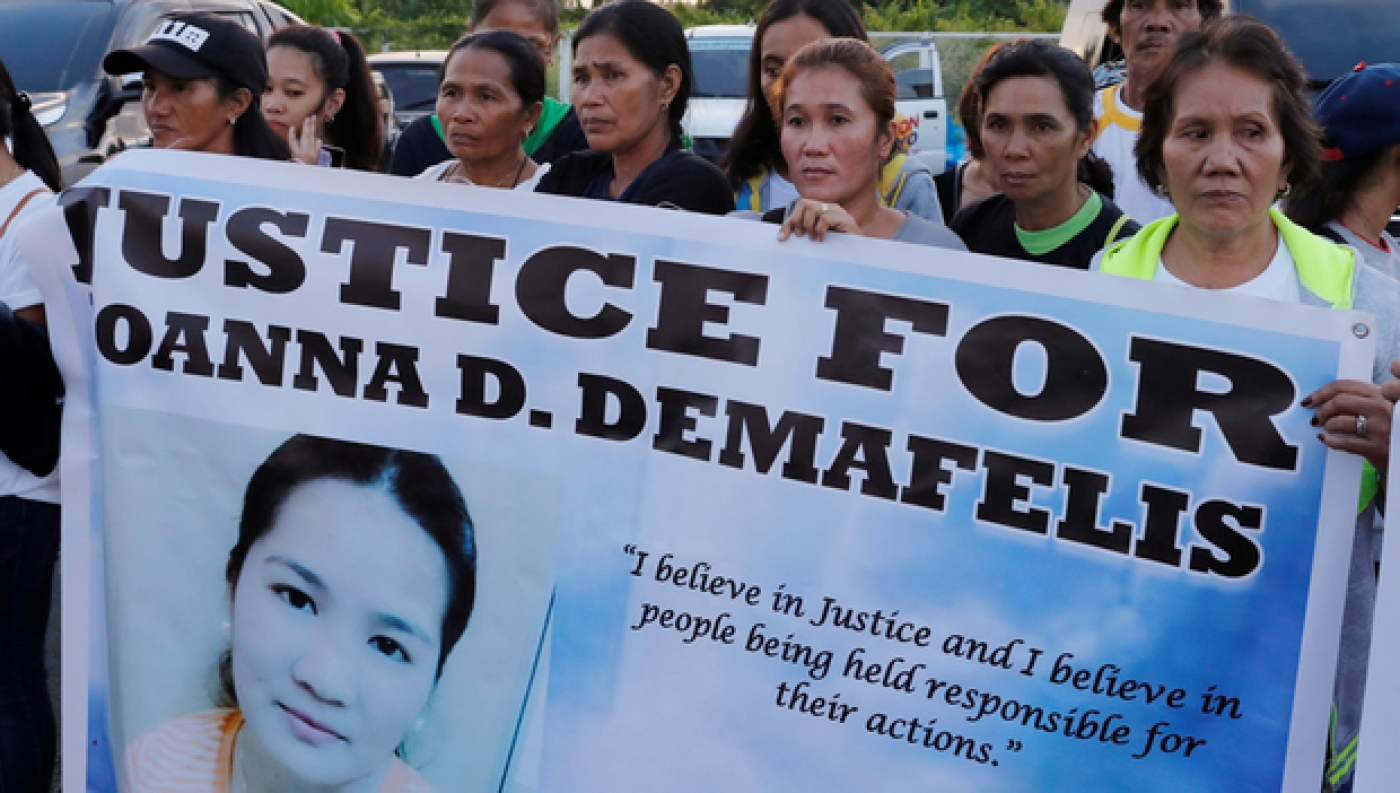 People gather in hometown of Joanna Demafelis, Filipina worker who was found dead in Kuwait (Reuters)
By
MEE and agencies

Kuwait on Wednesday ordered the ambassador from the Philippines to leave the country within a week and recalled its own envoy, after embassy staff tried to "rescue" Filipino domestic workers amid reports of abuse.

The decision was the latest episode in a three-month conflict sparked by reports that several Filipinos had been driven to suicide by the abuse of Kuwaiti employers.

The two countries have been working on a pact to protect expatriate workers after the Philippines banned the dispatch of workers to Kuwait, following reports of mistreatment.

The Philippines had apologised on Tuesday for what Kuwait viewed as a "flagrant" violation of its sovereignty. The Philippines foreign secretary said the embassy was forced to "assist" Filipino workers who sought help as some situations were a matter of life and death.

Kuwait's foreign ministry said it had given the ambassador three days to provide the names of Filipino residents in Kuwait who had "kidnapped" domestic workers from their employers' homes, adding it had yet to receive a response from the embassy.

Kuwaiti security forces "will continue to chase down those who violated the security of the country" and put them on trial, the ministry added in a statement.

In a statement, the Philippines Department of Foreign Affairs said the action taken by the Kuwaiti government was "deeply disturbing" and inconsistent with assurances given by the Kuwaiti ambassador during his meeting with Secretary Alan Peter S Cayetano on Tuesday.

"In discussions at every level with Kuwait, the Philippines has always emphasised that the well-being of Filipino nationals wherever they may be will always be of paramount importance," the statement said.

Domestic helpers account for more than 65 percent of the more than 260,000 Filipinos in Kuwait, according to the Philippines foreign secretary.

In February, Philippine President Rodrigo Duterte called on Filipino workers in Kuwait to return home after the discovery of a domestic worker's body in a freezer in an abandoned home. He said then that a list of both reported and unreported cases of mistreatment of Filipino migrant workers would be prepared.

Earlier this month, a Kuwaiti court sentenced a Lebanese man and his Syrian wife to death in absentia over the incident.

The Lebanese-Syrian couple was arrested in February in Damascus following an Interpol manhunt.

Syrian authorities handed the husband, Nader Essam Assaf, over to Lebanese authorities, while his wife remained in custody in Damascus.

Foreign workers in many Gulf states are employed under a sponsorship system that gives employers the right to keep their passports and exercise full control over their stay.