Riham al-Badr was killed by sniper fire from Houthi rebels while delivering aid, according to reports A leading human rights activist has been killed in Yemen during a mission to supply aid to forces loyal to President Abd Rabbuh Mansour Hadi in the city of Taiz.

Saudi-backed Al-Arabiya reported that Riham al-Badr was killed by a Houthi rebel sniper, along with another member of the humanitarian team.

Badr had been a major supporter of the 2012 uprising which saw longtime autocrat Ali Abdullah Saleh driven from power by mass protests.

Following the seizure of power by the Houthis in Feburary 2015, she was an outspoken opponent of the group and called for power to return to the Hadi government.

RIP Riham Badr... its reported she was shot by the #Houthis in her home city #Taiz - a powerful voice, she did all she can to get aid to those who needed it most.. in a city strangled by a siege for over 3 years now. Im really saddened by the news of her death. #Taiz #Yemen pic.twitter.com/BEVrzSRJAY

Speaking to Middle East Eye in July, Badr had called for the "liberation" of Taiz from Houthi control.

"We should participate in the liberation of our city," she said. "This is the least that we can give to our city."

Riham's brother Ahmed Badr, who was also an activist, was killed in March 2017 in the front of the military hospital in Taiz, according to Al-Arabiya.

"My deep condolences to the family of the martyr and the human rights activist, who is a member of the monitoring team at the National Committee for the Investigation of Human Rights Violations, Reham Badr, who was shot dead by the Houthi militia while observing violations that affect the residential neighborhoods in the city of Taiz, may she rest in peace," he wrote.

Shocked and deeply saddened to hear of the death of lawyer and human rights activist, Reham al-Badr, @rehamalbadr in apparent Houthi gunfire. Last time I saw Reham in Taiz we spent hours chatting politics well into the night. A huge loss for Yemen. pic.twitter.com/LtQCUSL5Nn

Riham's death comes as the UN warned that surging violence across Yemen had pushed some 85,000 people from their homes in the past 10 weeks, with hundreds continuing to flee each day.

The UN refugee agency said more than 70 percent of those displaced since 1 December had fled a military escalation in the Hodeida and Taiz governorates on Yemen's west coast.

UNHCR voiced particular concern for displaced people remaining in areas close to the hostilities in the two governorates, where conditions are continuing to rapidly deteriorate, "exposing people to violence and disease, without basic services.

"Most of those displaced in the governorates of Hodeida and Taiz remain hosted by relatives or friends, trapped inside homes or in caves as ground clashes, aerial bombardment and sniper fire rage around them," UNHCR spokeswoman Cecile Pouilly told reporters in Geneva.

These pictures are from today's prayer and funeral
Rest in Peace Riham
Every corner of Taiz is mourning her today#Yemen pic.twitter.com/l0RnS9fnMT

The UN agency also said it was observing a spike in new displacements from other frontline areas across Yemen, including in the border governorates of Jawf and Hajjah, and in the oil-rich eastern province of Shabwa.

"The main needs of the displaced and other conflict-affected populations continue to be access to shelter, health, food and water and sanitation," Pouilly said.

She warned that Yemen, which is already the stage of the world's largest humanitarian crisis, with more than 22 million people in need of aid, was "seeing a spike in needs, fuelled by ongoing conflict, a collapsing economy and diminishing social services and livelihoods". 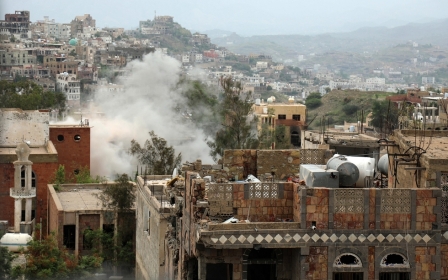