Libya on the brink as Misrata consolidates power

Although the vicious fighting over Libya’s main airport has ceased for now, the country’s political future is also in the balance TRIPOLI – The drive up to Tripoli’s international airport, which has been closed since fighting broke out for its control in July, is still marked with the same sign above the main entrance which reads, “Welcome to Tripoli Airport”. But the scene is far from inviting.

Below the sign, four anti-aircraft machine-gun mounted pickup trucks greet people at the entrance. These belong to the Misrata Islamist-led militias, which were part of the force that took control of what was once Libya’s busiest gateway to the outside world, and finally managed to seize the airport from anti-Islamist forces from the mountain town of Zintan over the weekend.

In mid-July, militias from the port city of Misrata under the command of Salah Badi - a member of the previous parliament, the General National Congress (GNC) - attacked anti-Islamist militias from Zintan that were stationed at Tripoli’s international airport.

The attack was the most violent Libya’s capital Tripoli had seen since the revolution that toppled former dictator Muammar Gaddafi in 2011.

The assault killed scores of militiamen but also civilians who were caught in the crossfire. Thousands fled to neighbouring towns and countries in order to escape the unguided surface-to-air missiles, mortar rounds, tanks, and anti-aircraft machine guns that were used in the battles for control of the airport.

The fighting seemed to reach a stalemate with the two sides wresting for control until on Monday 18 August, unidentified aircrafts bombed a Misratan militia base just east of the airport. The attack killed 10 militiamen and destroyed an ammunition bunker.

“We know the ammunition [of the bomb dropped by the jets] was American-made, that’s all I know,” said Abubaker al-Huta, a member of the Misrata military operations room.

Foreign powers were quick to deny involvement - with the jets using the cover of night to disguise their identity - but on Saturday 23 August, at dawn, they returned for a second attack. This time the planes took out two more bases belonging to the Misrata militias and killed 14 fightersincluding the only two sons of Misrata’s chief of military council, sources in the council told the Middle East Eye.

By Monday 25 August, the incident had turned international with the New York Times reporting that US officials had identified the aircrafts as belonging to Egypt and the UAE. The news was met by anger by most supporters of the previous Islamist parliament.

It wasn't long before: “Get your people out of Libya or else” was painted on the wall of the Egyptian consulate in Tripoli and a war of words erupted.

“It’s devastating, we should cut off all contact and [end cooperation] with both countries,” said Mohamed, a member of the Misratan militia who was at bombed base, cleaning up the carnage. The mystery strike was clearly devastating. Cars and buildings were destroyed, and unexploded munitions now lie in the blistering heat of the North African sun, while the stench of rotten food from the militias’ storage rooms filters out throughout the base.

“I don’t know why they attacked and killed our fighters,” said Mohamed who did not want to give his last name. “But, they gave us the encouragement we needed to attack.”

If the plan was to push back the Misrata forces, it backfired. Only hours after the air strikes, Misrata gathered its forces and began to advance.

Soon the Misrata militias attacked and seized a Zintan base just north of the airport. By the end of the day, they won control of the airport, the site that has been the main battleground in Tripoli. This came at a big cost and according to a Misrata military council spokesman more than 30 men were killed in the charge.

After the clashes, fighters celebrated by posing for photographs next to the bullet-riddled planes at the front of Tripoli’s main airport and later released the pictures on their Facebook pages.

Inside the airport, the main terminal is completely destroyed, the stench of smoke from a fire that overwhelmed the terminal only hours after the Misratans seized it still fills the air.

The roof of the airport’s terminal is barely holding and there are massive holes where missiles and mortar rounds had hit during the ferocious battle. The café and airline offices, where so many Libyans had waited to go on holiday, have all been torched and nothing but a few waiting lounge seats remain standing.

The runway is littered with bullet shells, where airplanes lay destroyed. The airport’s offices have been ransacked, nothing is left. Uncollected bags lie in the middle of customs office, with shoes, clothes and travel documents flung all over the floor.

It’s unclear who lit the fire after Misrata took the airport but forces loyal to Misrata now at the airport insist that when they arrived the entire place was already flooded in petrol and that the Zintanis had set it alight to ensure that if they could not control it, no one else could.

The only sign of life other than the militias is small kitten which survived the attacks and now sits exhausted in a corner - its black-and-white coat dirty and smoky from the flames.

The Misrata militiamen have nicknamed it the last lion of Zintan - a name that Zintan forces prided themselves with for their courageous fighting against Gaddafi's forces three years ago. 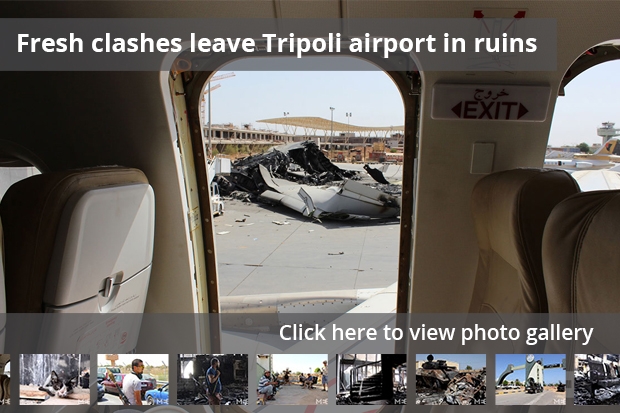 Since the clashes at the weekend, Misrata has been busy consolidating its gains.

Their militias, which now control the airport and all of southwest Tripoli, have set up checkpoints around its perimeter and huge piles of sand now block the roads leading into Misratan territory, guarded by two or three anti-aircraft machine-gun mounted trucks. Meanwhile other cars mounted with rocket launchers and anti-aircraft machine guns rush around patrol the streets of the capital.

At one of the checkpoints, at the last district before the airport, which was the worst affected by the fighting, Mohamed Dandana, a young militiaman, expressed his joy about the latest victory.

“Things are good, and we are in control,” he said, as he waved on the long queues of cars belonging to residents trying to get back to what remains of their homes in the southwest district of Gaser Bengashir.

“I feel bad so many were displaced,” he continued, while stressing he was happy that people could go back home now.

Since Misratan militias seized control “it’s been quiet, we have full control of Tripoli,” said Omran al-Zifri, as he stood at the main entrance of the torched airport.

Zifri is an army officer who had just returned from military training in Sudan last November and has been stationed at Tripoli’s international airport since Saturday.

“We are looking after what remains of the airport, until airport officials come to take charge,” he said. "We are all volunteers for Libya.”

The Misrata brigade he serves in, like so many others in Libya, is officially registered by the government. Despite the recent victory, it is likely all will continue to clamber for control as long as Libya’s political situation remains volatile.

Although the fighting in Tripoli has been put on hold for now, Libya’s political battlefield - polarised, weak, and with no real control over anything that happens on the ground - is probably at its most dangerous since 2011.

Libya is closer than ever to becoming a split country, with two parliaments claiming legitimacy; one in the north-eastern city of Tobruk, the other in the Libyan capital Tripoli both, with their own prime ministers and governments.

“I really just wish the best for Libya” said Zifri as he sat drinking his coffee with his fellow militiamen at the main entrance of Tripoli’s airport.

His men meanwhile look, point at the exit sign above them which reads “Tripoli airport bids you goodbye”, and laugh that they have fought too hard to leave.