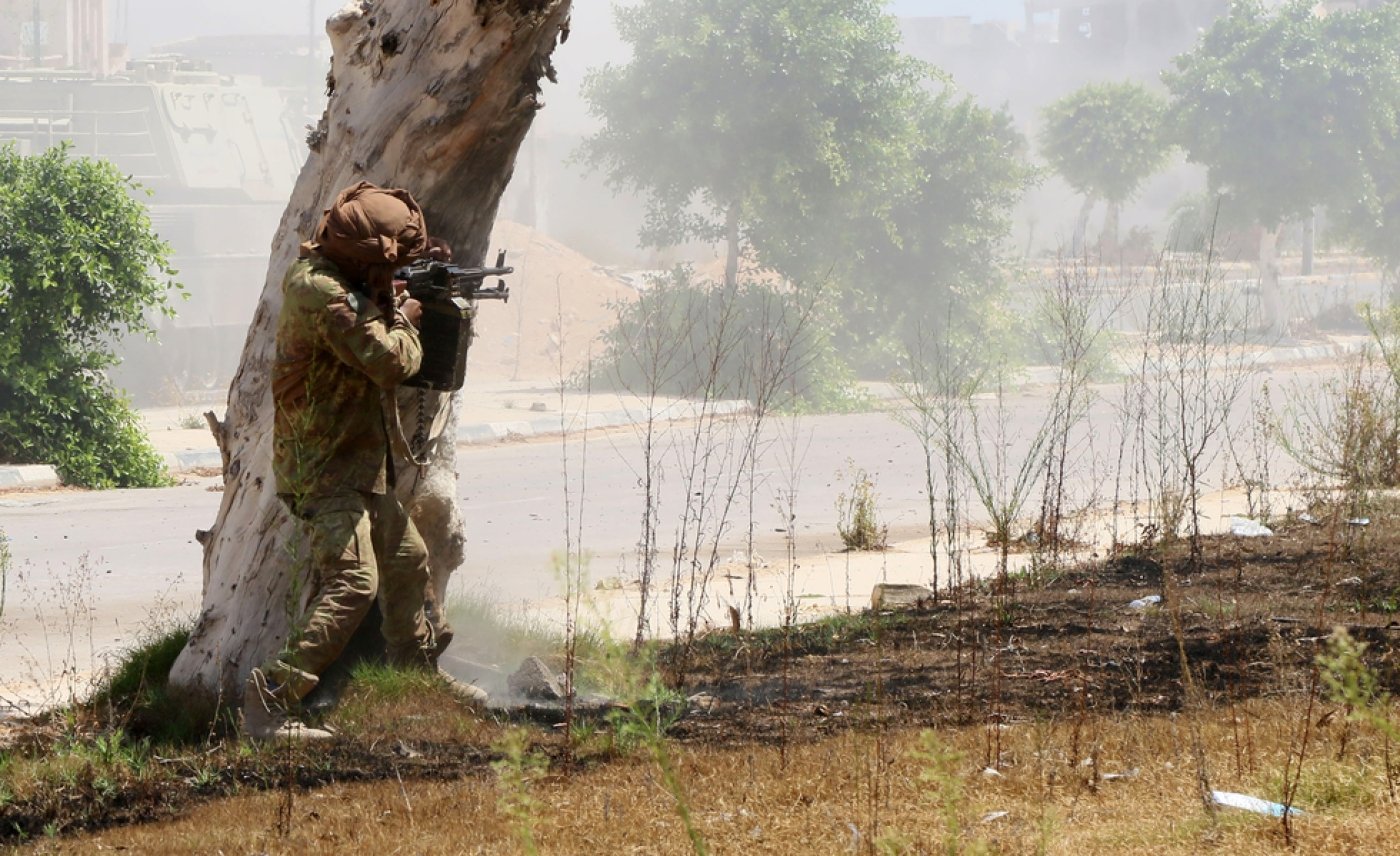 A Libyan government fighter aims his weapon on 14 August, 2016 in Sirte (AFP)
By
MEE and agencies
Forces loyal to Libya's UN-backed unity government on Sunday pushed into the last areas of Sirte held by the Islamic State group in what was the group's coastal stronghold.
Loyalists to the Tripoli-based Government of National Accord have for more than three months been pressing an offensive to retake the city from IS.
IS captured Sirte - which had been the hometown of Libya's slain Muammar Gaddafi - in June 2015, sparking fears the militants would use it as a launchpad for attacks in Europe.
Pro-GNA forces earlier this month made a significant breakthrough by seizing a conference centre where IS had set up base, pinning down the militants in a small downtown area near the sea.
"Our forces entered the last areas held by Daesh in Sirte: district number one and district number three," a spokesman for the pro-GNA forces said on Sunday, using an Arabic acronym for IS.
"The final battle for Sirte has started," Reda Issa said of the city 450 kilometres (280 miles) east of Tripoli.
About 1,000 pro-GNA fighters were taking part in the offensive, he said.
Eighteen loyalists had been killed and 120 others wounded in clashes since the start of Sunday's offensive, a field hospital for the pro-GNA forces said.
An AFP photographer saw several tanks and armed vehicles move towards district number one and heard gunfire and rocket explosions as they entered the northern neighbourhood.

The pro-GNA forces said on their Facebook page that the offensive came "after air strikes overnight".
US warplanes have been backing the assault to expel IS from Sirte, launched in mid-May, since 1 August.
As of 24 August, US warplanes had carried out a total of 82 strikes, according to the United States Africa Command.
The pro-GNA forces fought their way into Sirte on 9 June and seized the militants' headquarters at the Ouagadougou conference centre on 10 August.
Since entering the city, they have faced a barrage of sniper fire, suicide bombings and booby traps.
Pro-GNA forces are mostly made up of militias from western cities that have sided with the unity government of prime minister-designate Fayez al-Sarraj and the guards of oil installations that IS has repeatedly tried to seize.
For several days before Sunday's assault, these fighters had been gathering on the outskirts of Sirte and around district number one and district number three, troops told an AFP journalist in the city.
Fighters armed and prepared their tanks for inspection, while other soldiers disassembled and cleaned their guns.
"I'm cleaning my weapon... and getting it ready for the decisive battle" against IS, said one soldier.
"We hope that God will help us defeat them," Osama Mohammad Mosbah said.
Fighting broke out on Saturday on the edges of district number one between the militants and pro-GNA fighters armed with machineguns and rocket launchers, the AFP reporter said, after relative calm since late Thursday.

Pro-GNA snipers deployed onto the roofs of buildings whose facades were still painted with the militants' black flag, using binoculars to scan their surroundings for IS fighters.
Another anti-IS fighter, Ali Faraj Ben Saeed, said: "Of course the main weapons of the IS group are bombs. They rely on booby-traps and suicide belts mainly."
More than 370 pro-GNA fighters have been killed and nearly 2,000 wounded in the battle, according to medical sources. IS casualty figures are unavailable.
Analysts say that ousting the militants from their former North African stronghold would be a symbolic boost for Libya's fragile unity government, but it could also set the stage for further conflict.
They say the loss of IS's main stronghold could prompt the group to launch more scattered attacks across the country, which remains an important recruitment base for the militants.
IS has taken advantage of chaos in Libya since the 2011 uprising that toppled and killed Gaddafi, where rival militias and authorities have vied for control of the oil-rich country.
A UN-brokered deal struck in December led to Sarraj's unity government taking office in the capital, but it has since struggled to fully assert its authority.
The presidential council headed by Sarraj said on Wednesday it would present a new cabinet line-up in an attempt to secure the backing of parliament.
The legislature, which rejected a previous unity government in a vote on Monday, gave the council a "final chance" and 10 days to propose a new cabinet.