The head of general intelligence in eastern Libya was killed by unknown gunmen in the city of Benghazi on Thursday, an intelligence official has told news agencies.

Colonel Ibrahim al-Senussi was shot dead near the medical centre in the city centre, the unnamed source told AFP.

"He was in his car when unknown assailants opened fire. He was hit twice, once in the neck" the source added.

Benghazi was the cradle of the 2011 uprising that ousted long time dictator Muammar Gaddafi and has since been plagued by violence that has killed dozens of members of the security forces, judges and foreigners.

Last Friday gunmen from the Ansar al-Sharia brigade stormed police headquarters in Benghazi, which led to a firefight that killed at least nine soldiers and police.

In a rare public statement al-Senussi appeared on Libyan channel Awalan TV on Tuesday to name a number of individuals who he said were linked to Ansar al-Sharia and accused them of responsibility for the police headquarters attack.

There has been some speculation on social media that his television appearance may have prompted today’s assassination.

Col. Ibrahim Senussi, eastern libya chief of intelligence, assassinated 2 days after he named names on TV - names of those behind killings.

“Assassinations happen all the time in Benghazi, targeting security officials of all ranks, simply because they work for the government” Ghaith Shennib, a resident of Benghazi, told MEE.

“At this stage it is impossible to explain with confidence why Senussi has been killed” he added.

A statement posted to Facebook by the Ministry of Interior condemned the killing and restated the government’s resolve to bring stability to Libya.

“We extend our deepest condolences to the family of the martyr and say that a series of assassinations targeting our army and police officers will not deter or intimidate us” the statement said.

“We will not back down from setting Libya’s train on the rails of stability, moving toward the goal of building a stable civil state in which extremism and crime are eradicated” it added.

Since the 2011 uprising the transitional government has struggled to rein in armed militias who played a key role in overthrowing Gaddafi. These militias have been implicated in an ongoing spate of kidnappings, which have targeted ministers, journalists and foreign embassy employees. 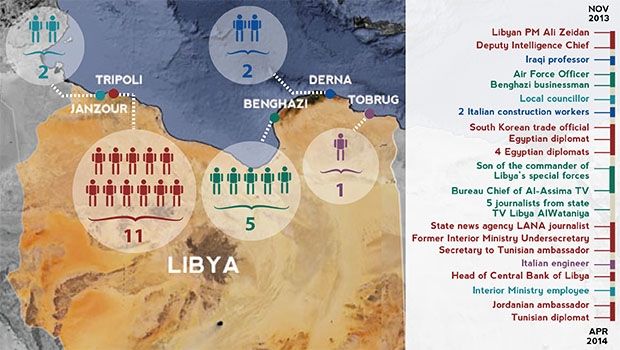 The Jordanian ambassador was kidnapped by unknown gunmen in Tripoli three weeks ago, who have demanded the release of a Libyan jailed in Jordan for terror related offences.

Mohammed Saeed al-Darsi was tried and convicted in 2007 on charges of involvement in planning an attack on Jordan's international airport.

After announcing on 29 April that Jordanian authorities had agreed to repatriate Darsi, Libyan authorities ratified an extradition agreement with Jordan today that will involve the exchange of prisoners between the two countries.

If Darsi is repatriated in exchange for releasing the ambassador it is a move that could provide further belief among militia groups that kidnapping for political leverage can be an effective strategy.

“By giving the kidnappers what they want authorities are setting a dangerous precedent,” said Jason Pack, researcher of Middle East History at Cambridge University and president of Libyaanalysis.com.

“Both governments should have avoided giving in to the kidnappers, ridden out the consequences and shown there is a price to pay when international norms are violated” he added.

Militias have successfully used abduction as a bargaining chip in the past, most recently in March when five Egyptian Embassy staff were kidnapped in Tripoli by a militia group whose leader was being held in a Cairo prison. Egypt freed Libyan military commander Shabaan Hadiya shortly after the diplomats were released.