National Front leader reportedly won four percent of Muslim votes in 2012 presidential election. So how do things stand in 2017? 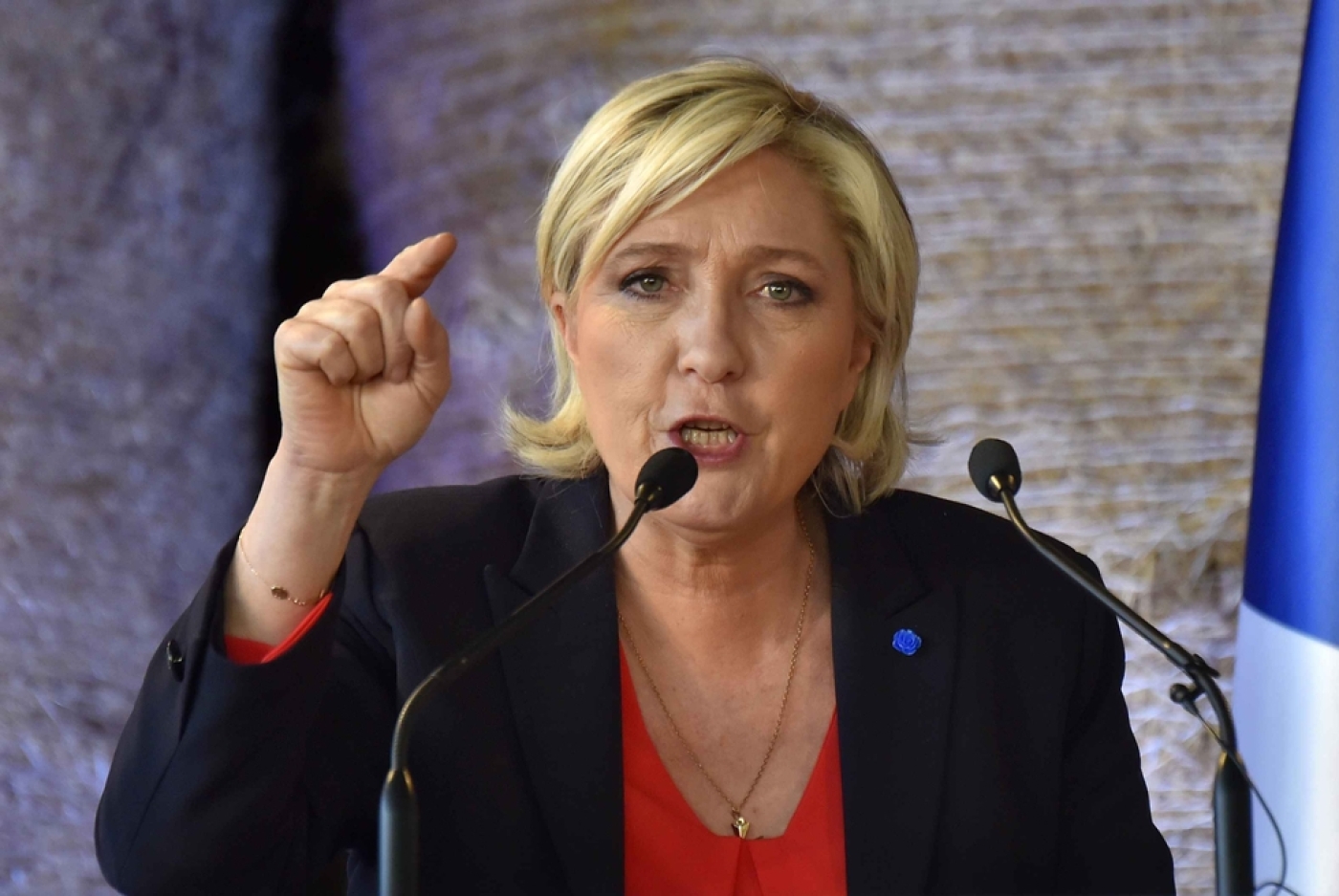 PARIS – Marine Le Pen, the leader of the far-right French National Front, shocked politics last September when she coolly declared Islam was compatible with the Republic, at a time when many politicians were railing about the evils of the "burkini".

Regardless of "skin colour, sexual orientation or religion, the citizens we acknowledge are from one community alone – the national community", said Le Pen later that month during a political rally in Brachay, northeastern France.

Is this relative openness to Islam, contrasting sharply with the xenophobic reputation of the National Front (FN), and wooing the French Muslims who make up about five percent of France's electoral body?

According to party leaders, including the FN's treasurer, Wallerand de Saint-Just, the answer is a resounding yes.

In December 2015, Jordan Bardella, the FN's leading candidate in Seine-Saint-Denis regional elections echoed those views: "A survey shows the FN has the most popular support in sensitive urban areas.

"When the inhabitants of these areas are asked which party they believe would best meet their expectations, the FN always comes out on top."

But beyond such statements from party leaders, is there really such a thing as a Muslim National Front vote?

No official data on Muslim vote

Antoine Jardin, a political scientist, has serious doubts, pointing out that "there are no official statistics on the question" – a 1978 law makes it illegal to collect data regarding religious denomination.

"We mistakenly talk about the Muslim vote when in reality it is the vote of the descendants of North African and African immigration," he added.

The political commentator also noted that the National Front has made gains all over France since the 2011 cantonal elections, in the same year Marine Le Pen was elected party president, a progression also seen in the poorer districts.

However "the FN vote is growing at a much slower rate in the underprivileged suburbs than in the rest of the country as a whole", he told MEE.

But while there are no precise figures on the "Muslim FN vote", there is no denying the existence of FN members of Muslim background. Two motives in particular seem to stand out, experts say - the unhealed wounds of the war in Algeria and the paradox of "achieving integration" by voting FN.

Mohamed Bellebou joined the FN for its support of the "Harkis" - Muslim Algerians who served in the French army during the Algerian war.

The elected FN city official, who is also the secretary general of the Coordination of Associations for the Repatriated Harkis, said: "The FN is the only party that recognises and respects the loyalty of our fathers. The FN has shown its thanks to the repatriated Harkis," he told MEE.

'They are French citizens like any others, they are reacting the way all French people do. They believe that the National Front is better able to protect them'

The same historical underpinnings motivate 72-year-old Amar Benmerzouk. His father was not a Harki but a French Army veteran of the Second World War who "believed there was no future [in Algeria] with only Muslims", he told MEE at the Paris FN headquarters.

"We were on good terms with the pied-noirs, we formed a brotherhood," Benmerzouk added in reference to the "black foots", a term for European colonials.

The similarities between the two men's stories are striking. Both voted socialist in 1981 but were disillusioned by the sudden "turn toward austerity" in 1983.

Both accuse the Socialist Party of using Muslims as a disposable electorate in neighbourhoods considered by the party as "an untapped source of potential voters".

Both joined the Rally for the Republic, or RPR, then slammed the door on the right-wing party. "They didn't want Muslims," Benmerzouk says.

Both were somewhat hesitant to vote FN at first, as Bellebou did in 1997, and Benmerzouk did in 1988.

Benmerzouk became French in 1959. This former craftsman says he succeeded because he assimilated. Proud that his daughter married in church and to have given French names to his two children, he sees assimilation as the only option for immigrants.

"We have to reach out to other people. Arabs remain among themselves. I assimilated and made something of my life," he told MEE.

'Our model is one of assimilation, of merging into the national melting pot'

"Our model is one of assimilation, of merging into the national melting pot," the FN president proclaimed during her stump speech in Brachay.

That casts out the theory of integration and of consensus among cultures, traditionally accused of "reinforcing the disintegration of the nation and the République", and replaces it with colonial-era assimilation, defined by a government circular of 1927 as "the most complete and perfect incorporation of foreign elements into the nation".

Benmerzouk adheres to the principle of "making similar", or even "invisible", a religion that is too "visible". "So long as Muslims continue placing religion first, they will never get anywhere," he says.

"People who are successful put aside their religion. Why don't Muslims do like other immigrants and just practise at home?... I don't believe Islam could become a French religion."

Issues of remembering the past and integration aside, the motives of the Muslim French who choose the FN may be identical to those of other non-Muslim FN voters, Saint-Just told MEE.

"They are French citizens like any other, they are reacting the way all French people do. They believe that the National Front is better able to protect them."

According to him, the FN is "very well received in the impoverished suburbs".

The FN activists encountered by MEE do in fact seem to share the average FN voter's fears and demands for law and order.

Bellebou remarked that "the country needs to be respected, both internationally and at home".

"I'd like to see a country that is happy with its citizens, regardless of their colour. I pity the poor immigrant populations. They are condemned to fail in French society, whereas, if they had been encouraged to spread more evenly, France could have thrived.

"But it is impossible to integrate when more than 17 percent of a local population is of the same origin," he said.

Benmerzouk shares similar nationalistic views: "I believe in nation first. It is the basis of a single undivided family. Marine is for French people of all origins. I am a nationalist. I love France, and the French people. But in today's globalised world, we are mere pawns."

Another constant among FN voters, whether Muslim or not, is a marked cultural conservatism, particularly when it comes to values.

‘What the FN is really worried about is that Islam may come to be considered a French religion, that it may gain real visibility'

Bechikh has noticed this tendency in his association, Sons of France: "Muslims, like some Christians, vote for the National Front because they are drawn to more conservative policies. They are concerned with issues of morality, especially the repeal of the same-sex marriage law."

Another common trait among Muslims is a shared dislike of the political establishment, what the FN calls the "UMPS", to designate the Union for a Popular Movement (UMP), the former name of the Republican Party, and the Socialist Party (PS) as a single entity.

Bellebou and Benmerzouk are both former members of the Gaullist RPR party.

Omar Djellil, a 46-year-old who joined FN in 2011, said the "system" was a deciding factor in his switching to the FN.

"The betrayal of the left is what finally opened my eyes," he said.

"The left had ceased to be the left, replaced by an extensive political machine promoting the interests of party insiders. This left had lost all political legitimacy."

Djellil, however, recently left the party, disillusioned by Le Pen's take on assimilation - not everyone agrees on that point.

Obviously it is in the interest of Le Pen and her associates to publicise such Muslim French nationals who vote FN. It is part of a strategy to "detoxify" the party, in keeping with Le Pen's campaign slogan "A country at peace with itself".

Moreover, these members insist they have never experienced racism inside the FN. Bellebou makes this very clear: "If someone made a racist remark to me, I would ask whether or not they have ancestors, like I do, who died for their country."

‘Marine is surfing the populist wave of identity politics'

Benmerzouk claims the same: "I have never, since 1988, been subject to racist remarks. They [FN party members] just want us to love France, and I do. I often go out canvassing; people call us Nazis but not as often as they used to. I tell them the war is over, it's time to think about our children".

Haoues Seniguer, a researcher in political science, is sceptical nonetheless. He stresses that "a party with an ideology built around ‘otherness' seen in a negative light will always maintain that ideological base".

He remarks that the FN expects more from Muslims than it does from other French nationals, subjecting them to a form of citizenship on probation: "They constantly have to make efforts. The fact there is this question around Islam weakens the social fabric and creates suspicion all around. Yesterday the FN signalled out immigrants; today the Muslims are under fire. It is a constant theme: the party regards foreigners as a threat. What the FN is really worried about is that Islam may come to be considered a French religion, that it may gain real visibility," he told MEE.

Djellil agrees, cracking the veneer of FN's rebranded image as a party open to Muslims. This self-proclaimed "kid from the suburbs" was a party insider whom Jean-Marie Le Pen asked to draw up a charter on Islam in France.

"As I see it, Marine has taken an entirely different stance," he told MEE. "I was an active supporter of the project for the Grand Mosque of Marseille and the National Front opposed it. But I talked to Jean-Marie Le Pen, and he saw the project favourably." Later, progress was blocked by "the Marine team," Djellil added.

"Marine, Marion Maréchal-Le Pen [FN parliament member], Florian Philippot and Louis Aliot [FN vice presidents] are the most virulent, claiming that a partnership with Muslims would not meet FN party line policy. The situation lacked coherency. On one hand, the party was professing anti-Muslim views locally, on the other Marine was to an extent adopting a more respectful attitude toward Islam, nationally".

To him, it's a ploy to win over France's Muslim voters: "Marine is surfing the populist wave of identity politics."

"As I saw it, there were two National Front movements, one that was open to Muslims, and another, Marine's, that was totally closed, though publicly she was claiming there was room for Muslims. So I quit the party two years ago. I no longer wanted to advocate for the FN." ANALYSIS: The National Front is forcing France into a political make-over