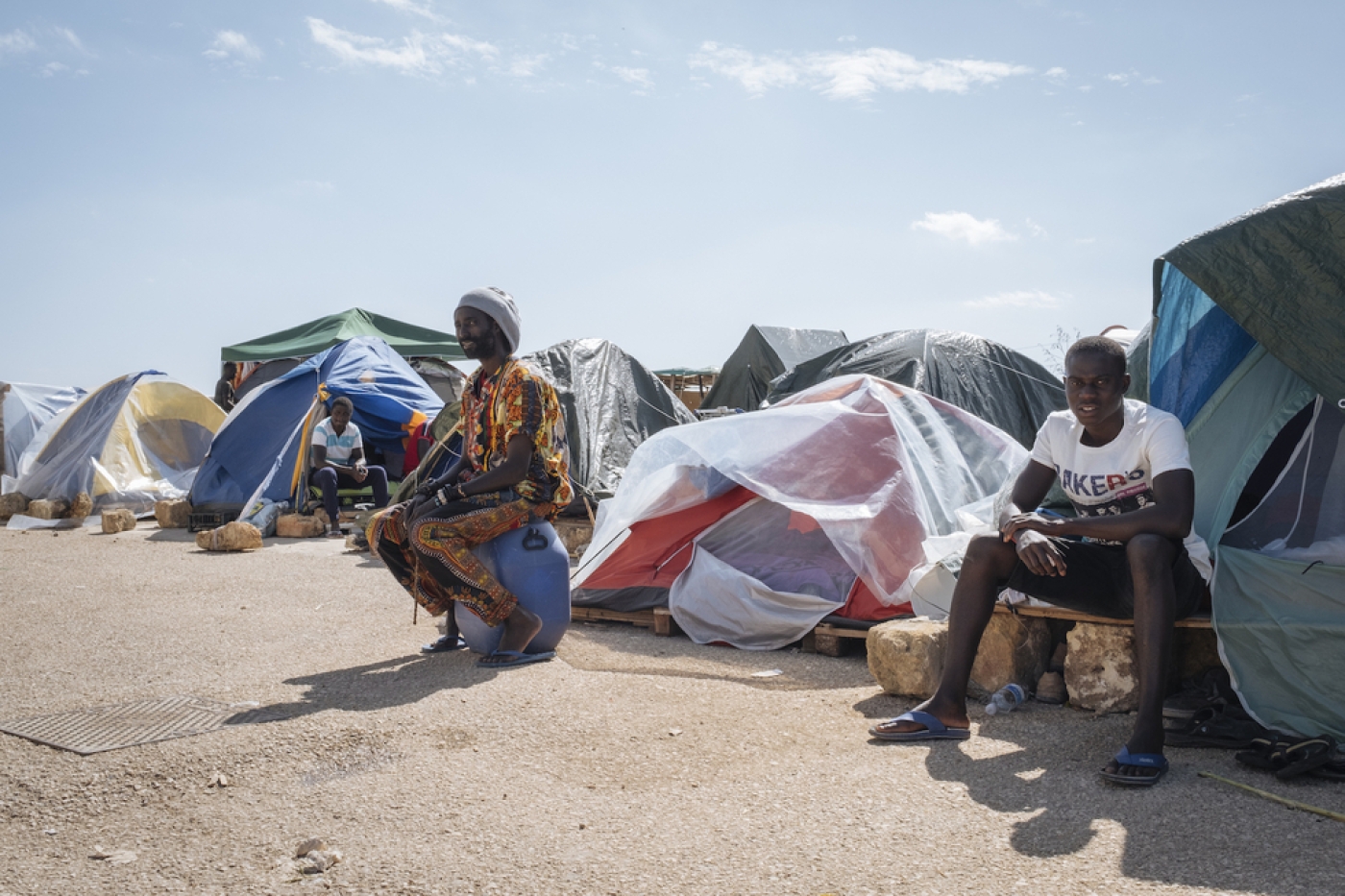 CAMPOBELLO, Italy - "We’re here to work," says Farhat, a 50-year-old Tunisian, as he surveys the squalid camp in the heart of the Sicilian countryside. For two months of the year when during the olive harvest, he is among a thousand men who call the camp home.

"I pick olives from 6am till 4pm and get paid €30 a day. It’s hard work and we have to compete to get it. But what else can I do? There is nothing else. I don’t have documents. I came here to Europe 10 years ago to look for work and a better life. There’s no work in Tunisia, no future. I thought I’d make money, I’d get rich coming to Europe," he laughs.

"But I found the opposite. Europe has money to make wars everywhere, but not money to feed the people here in this camp. I feel disappointed in Europe."

The camp is sited on the grounds of a disused olive oil factory outside Campobello, a small town near Marsala on the southwest coast of Sicily. The factory was a mafia operation until it was confiscated two years ago by the government.

The workers stay for months, and live in small camping tents or under makeshift structures covered with tarpaulin. Litter sits in stinking piles around the perimeter fence, as municipal waste collectors refuse to service the camp. There’s no hot water and the men buy their food from local vendors and, apart from 200 litres of milk handed out each day by a local NGO, the men receive little or no aid.

Many local Italians are hostile and refuse to rent rooms to the men. According to an Italian volunteer who works at the camp, a group of Italian teenagers last year drove in and threw acid at some of the workers.

Farhat is one of an estimated hundred thousand migrant workers who form an army of agricultural labour in Italy, which moves around the country harvesting fruit and vegetables. Members are often exploited by farm bosses because because of their sometimes irregular asylum status.

"After harvesting the olives," Farhat says, "I will go off to Catania for two months to pick oranges. Here it becomes very cold but we still live in the tents. I harvest strawberries and peaches in Naples in summer. I get paid the same in these places: about €30 a day. I’ve worked like this for 10 years."

Farhat, like many, has applied several times for work permits and residency but without success.

"Almost everyone here, 90 per cent, work in the black market. That’s why they can pay us so little. I can’t even go home to Tunisia to see my family because then I wouldn’t be able to come back. I haven’t seen them in ten years.’

Although Italy has no minimum wage, the country’s constitution says that workers must have contracts and wages high enough to allow workers and their families at least minimal subsistence, which clearly is not the case for the thousand workers at Campobello.

Marco, a 42-year-old from Senegal, says hundreds of the men walk from the camp at 5am into the centre of the town to be chosen for work by farmers.

The farmers will shout out to the men what they’ll pay per crate of olives collected, Marco says. One crate takes about an hour to collect. The farmers start low: €2, and work their way up until the men agree. "About €3 is what most people will agree to work for," he says.

And there are a lot more people here this year - "a lot more competition for the work and so the amount of money we make is less."

"For me, the work is not easy at all, it’s tiring and complicated.

"You have to work very fast and not take breaks if you want to make any money at all and get hired again. It’s hard on your hands and on your brain because you have to work so quickly.

You have always to wake up very early and with little sleep because it’s hard to sleep in this place."

Although most people at Campobello could be described as economic migrants, most having left their countries primarily to look for work in Europe, there are also political refugees living in the camp. Adam, a 30-year-old man from Darfur, explained how he had ended up here.

"I left Darfur 10 years ago and travelled to Libya, where I stayed for one year, and then came to Italy [on] the boat." he says.

"I came because of the war in Darfur. "The government sent troops to kill me and my family... everyone’s family. Everywhere there was fighting. If the fighting does stop there I want to go back to see my brothers and sisters and family."

Adam complained that although he had been granted asylum in Italy, he is stuck in the seasonal farm labour system, constantly moving around and searching for work.

"Since I arrived in Italy I have lived in many places, moving around to look for work on the farms and in the cities. Any place where there is work I am going. I’ve been here [at Campobello] for 27 days looking for work but I have only found work for five days. I make €30-€35 a day when I work. It is very hard to live here like this with no work. It is a big problem. I have papers to stay here in Italy and still I have to live like this."

Others, like 23-year-old Amdy Fal from Senegal, came to Italy fleeing the conflict in Libya. "I’ve been in Sicily for two years and before that I spent two years in Libya working. In Libya there are lots of problems," he says.

"A friend was killed by the military. At any time you can lose your life there. I left to look for a better life. I paid €500 to take the boat to Sicily."

"We get paid at the end of the harvest, after working for many weeks, but sometimes we run out of money for food before that and it’s very hard," he says.

"After this I will go over to Rossano to pick the oranges. The harvest there lasts four months through the winter. It is very cold there and we still live in tents like this. All people here are going there after. It’s very hard work, here and there.

"We speak to the Italian people here in the town but they don’t care. Sometimes you feel angry but there’s nothing else you can do; this is the only work for us."

"These men used to sleep in the fields without water and electricity until we opened the camp a few years ago," says Angelo, a volunteer for LIBERA, an anti-mafia NGO that works at the camp.

"We’re trying to deal with this humanitarian situation but we don’t have the resources or the volunteers. The men here are mostly Sudanese, Senegalese and Tunisians, so it might not be easy for them to live together but actually the atmosphere is really very good. There’s a feeling of solidarity - for example, if a man doesn’t have money, others will generally buy him some food. But obviously it’s no hotel. The real problem is that local Italians with houses around here won’t rent them out to the guys. We’re trying always to bring the local community closer."

Although official estimates put the number of foreign agricultural workers in Italy at 116,000, a report by the Ethical Trading Initiative (ETI) last year put the number at 500,000.

"Foreign labour is regarded as crucial to enable Italian agriculture to compete on global markets. Yet in a race to make the biggest possible profit, employment laws are being routinely ignored,” said Nick Kightley, an ETI spokesman.