Morocco elections: The chance to change a kingdom?

Some parties are using upcoming polls to back idea of parliamentary monarchy. But it’s a hard ask in a country where change seems impossible 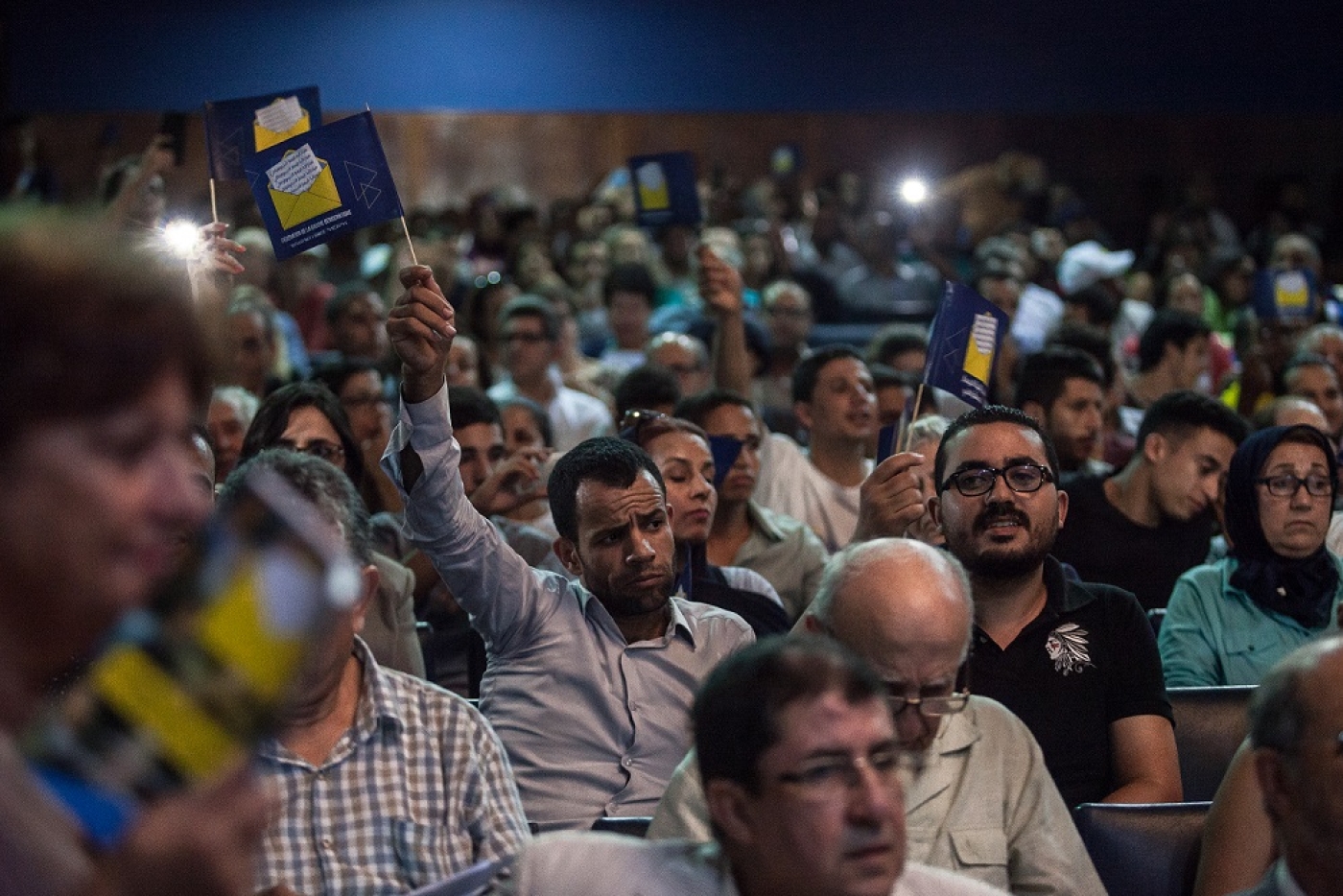 RABAT - An ever-growing crowd is gathering at the doorstep of the Allal el-Fassi venue in Agdal, an upper-class area of the Moroccan capital.

Three days before the 7 October legislative elections, members and activists of the Democratic Left Federation (FGD), which is made up of three radical left parties - the Unified Socialist Left (PSU), the Party of the Socialist Vanguard (PADS) and the National Ittihadi Congress - are trying to find seats.

They have all come to support the head of the list in the constituency, Omar Balafrej - and especially to hear the charismatic Nabila Mounib, the 56-year-old leader of the FGD and secretary-general of the PSU.

“These politicians are trustworthy and honest people!” says Mounia Semlali with enthusiasm. Semlali, 26, coordinates communications in a research centre and is wearing a T-shirt with the party logo on it. She is not officially a member of the party but she volunteers, like many other young people today.

'These politicians are trustworthy and honest people!'

The venue is quite modest. It does not resemble the large showy meetings organised by the two largest parties in the country: the Islamist Justice and Development Party (PJD), which has been running the country for the past five years; and their direct opponents, the Authenticity and Modernity Party (PAM), founded in 2008 by Fouad Ali el-Himma, a childhood friend of King Mohammed VI, who then became his adviser.

But a third party has made its entrance into this highly publicised arena; the FGD, which has attracted an ever-greater number of Moroccans who are looking for change and who are very much interested in the party’s programme, namely the formation of a parliamentary monarchy monarchy and the division of powers.

'Today, nothing has changed'

“In 2011, I voted for the PJD,” Semlali told MEE. “But I have been disappointed. I had lost hope and trust in the political parties, in the system in general. Now, the federation is giving brand new hope, an opportunity to bring change to Morocco.”

The institutional reforms the federation is focusing on represent an exception in the legislative elections landscape, since the other 30 parties involved consider that the limited liberal reforms of 2011 are enough.

In 2011, during the February 20th movement – which took place during the wider Arab Spring - riots and protest movements in Morocco compelled King Mohammed VI to compromise. In July 2011, a new constitution was adopted by referendum. It stipulated, for example, that from now on, the prime minister should come from the party which wins the legislative elections, and now has the power to dismiss parliament, which until then had been the privilege of the king. Early legislative elections were organised in November 2011.

But the United Socialists, Nabila Mounib’s party - which at the time supported the February 20th movement - decided to boycott the elections. It was disappointed by the lack of an independent electoral supervisory authority and the fact that Moroccan people who were not registered on electors lists could not vote by showing their ID. People who supported the PSU’s decision gambled on the fact that it would create some sort of bargaining power in favour of those who wanted a radical shift.

'The government has failed, for it did not keep its promises, meaning fighting despotism and corruption'

- Nabila Mounib, leader of the FGD

Eventually the Islamist party won the elections and formed the government. It might have accused PAM of tahakoum” (best translated as “authoritarianism”) and being controlled by the royal cabinet, but it has never questioned the fact that all the power is in the king’s hands.

“Today, nothing has changed,” says Mounib in an interview with MEE. “Saying that there’s a difference between the PAM and the PJD is an absolute lie,” she asserts, adding that this whole electoral clash “has been created by the state media.

“The government has failed, for it did not keep its promises, meaning fighting despotism and corruption. On the contrary, it has normalised relations with both of them [...]. On the other side, there’s another party that was actually founded and supported by the system, for the system, which claims to be a modern party but is not, since it has never demanded democracy to be applied in Morocco."

Mounib adds: “Some people say that the constitution is only five years old and we need to give it time. What is it we are supposed to wait for? It will not change by itself!”

“The constitution, even if it was rocked by the events of 2011, still remains in favour of the monarchy,” Mohammed Madani, professor of constitutional law at the Mohammed V University in Rabat, told MEE.

“It has become more flexible on some points, such as the fact that the prime minister should come from the party which wins the legislative elections, but there’s no real division of powers. The idea of having a parliamentary monarchy where the king rules but does not govern is very much supported today. Some sort of sympathy is surrounding Nabila Mounib and her ideas.”

The PSU party and its allies from the federation, who have been back in the electoral game since the municipal elections of 2015, are hoping that they will offer “a third choice” to voters for these legislative elections and that they will at least win 20 seats to form a parliamentary group.

But because the Ministry of Home Affairs has forbidden any opinion polling be carried out during the campaign period, it is difficult to assess the chances of success for the FGD. “We firmly intend to form a strong opposition, whatever the number of MPs we will end up having,” Abdullah Abaakil, a 46-year-old FGD candidate in Casablanca, told MEE.

But Abaakil, a former activist of the February 20th movement who joined the ranks of the PSU in 2015, says there is not a chance of any sort of alliance, nor of it somehow becoming involved with the government.

'What’s the point of participating?'

On Sunday 2 October, Abaakil and his fellow activists did some door-to-door canvassing in an upper-class neighbourhood of Casablanca. In his black Jaguar, a hard hat sits next to piles of leaflets and electoral pamphlets ready to be handed out.

“This is for when we go to the Medina, the old town!” he says laughing. "We face a few difficulties in the popular neighbourhoods. Some parties buy votes, so sometimes we have to deal with mafia-type organisations that supervise this business. And in the upper-class neighbourhoods, the concierges are our main problem. They guard the entrances and, since most of them are paid by other parties, they make sure no other parties get in.

“Today’s regime is an authoritarian regime using only occasional democratic methods,” he says, "which means there’s still a high degree of repression, let’s not fool ourselves. Another issue is that there’re a lot of people who are still not registered on the electoral lists."

The number of unregistered is around five million, in contrast to the 15.7 million people who are registered: it represents a quarter of the Moroccan population who are eligible to vote. In 2011, the abstention rate reached more than more than 55 percent out of 13.6 million people registered to vote.

“Personally, I’m not going to vote,” confesses Nabil, a 26-year-old professional. “The parliament has no authority whatsoever, everything is decided in the royal palace."

Mehdi, a 35-year-old entrepreneur, who also wished to remain anonymous, says regretfully: “I’m not sure I’m going to vote yet. I feel it’s all confusing. We cannot tell the difference between the decisions that are taken by the parliament and the ones taken by the royal institution.

For Amine Lekbabi, a young member of the Marxist-Leninist party Annahj Addimocrati (known as the Democratic Way), it’s crystal clear: “The people have decided to boycott these elections!” His party has decided to call for a boycott of the vote, which is a “farce” according to its members.

The 25-year-old female student, who was actively involved in the February 20th movement, adds: “What’s the point of participating? The parliament is totally useless and so is the government. The Makhzen (the Royal Institution) is actually governing. A lot of money is spent during these elections to make Morocco look like a democracy. But it’s all fake.”

During this campaign, Annahj Addimocrati has attempted to hold demonstrations in several cities, calling for the boycott of the legislative elections. But they were quickly repressed. “This only comforts us in our conviction,” says a determined Addimocrati. “We will definitively boycott these elections.”

Boycotting is not the answer for some

But boycotting does not seem to be the solution for the FGD activists. “We surely have common grounds with those parties calling for the boycott,” says Abdullah Abaakil, "such as defending social and political rights and freedom of speech. However, this call divides the left-wing parties. Indeed, our main adversaries in these elections are the corrupted parties. If we let them win by clearing the way and without fighting, I believe that we’re missing the point.”

Al-Adl Wal Ihsane (Justice and Spirituality), another political Islamist organisation, is also calling for a boycott of the elections. This movement is officially banned, but the authorities tolerate it. It demands that the constitution be changed because “it glorifies tyranny”.

However, even if both FGD and Annahj Addimocrati agree on some level with Al-Adl Wal Ihsane’s ideas, they clearly refuse any type of alliance with the organisation. They both explain that they are ideologically too different.

“The problem is that the FGD cannot activate the motion for change on its own,” says Fouad Abdelmoumni, an economist, member of the Moroccan Association of Human Rights (MAHR) and Transparency Maroc secretary-general, who says he is speaking to MEE as “an activist for democracy in Morocco”.

“At the end of day, we have to admit that for many years a groundswell of progress has been initiated,” he explains. “Repression and corruption have become less efficient. Monarchical authoritarianism seems to be running out of steam - but it is far from having drawn its last breath.

“The citizens are becoming more and more informed, and if the palace is perceived as accountable for the general decline of the society, then it will pay the consequences. Is it going to figure that out soon and lead the country to a European-inspired monarchy, which was the implied promise of 2011, or will it be even more authoritarian?”

It’s a question that might be answered during the legislative elections.