'My family has gone': Iraqi troops find deserted villages on road to Mosul

IS has forced thousands of villagers into Mosul to act as human shields, leaving swaths of Nineveh empty and families searching for loved ones 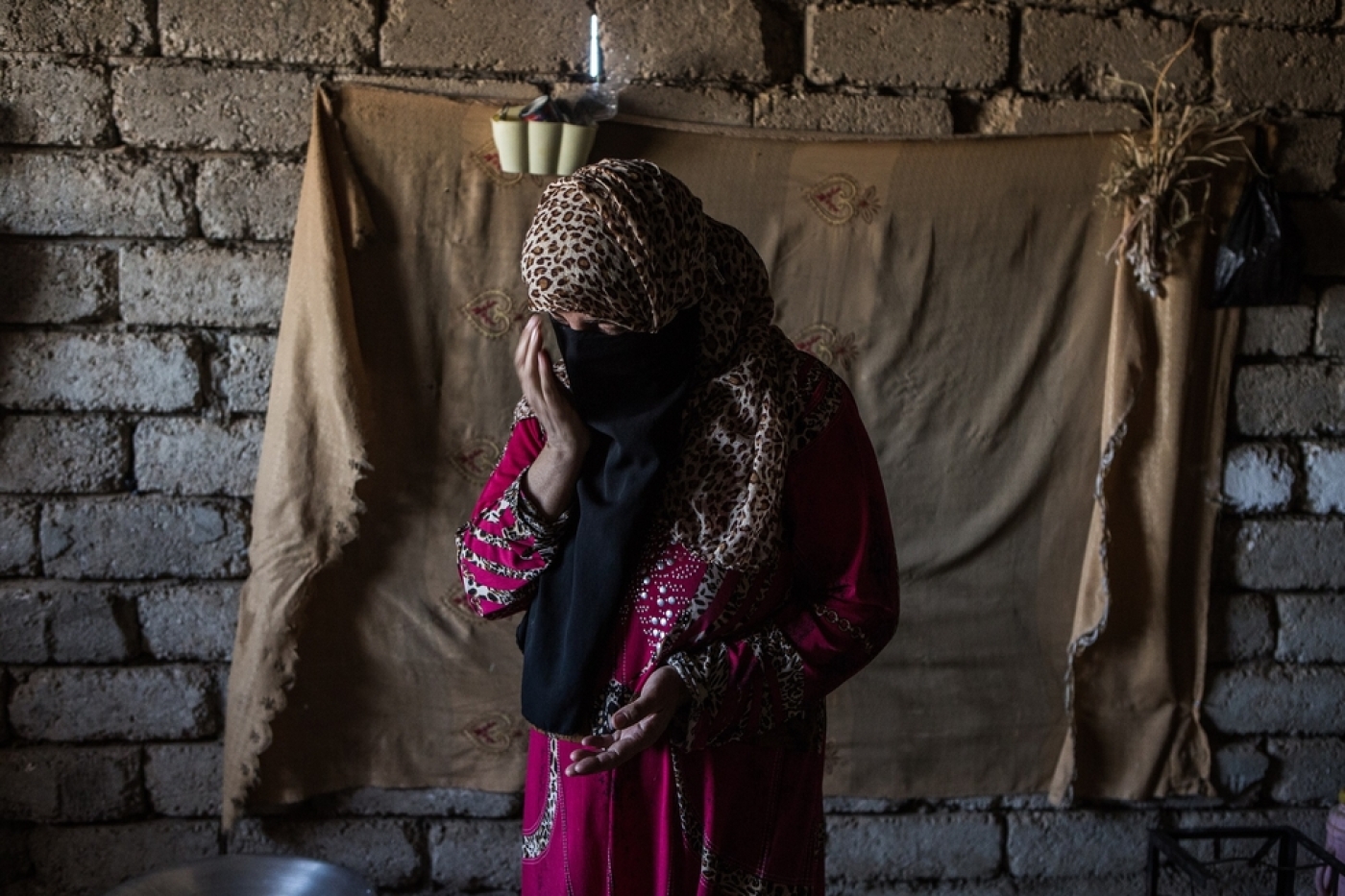 RASEAF, Iraq - There are no people in the streets of this small hamlet, 50km from the Islamic State stronghold of Mosul. The sound of an approaching car puts the Iraqi army soldiers on edge before it becomes clear it is comrades delivering today's rations rather than IS militants dealing death.

The driver of the vehicle pounds on the horn a few times as the army runs out to get the day’s rations. Everyone, that is, except for 24-year-old Mohammed Abu. His appetite has deserted him.

"This is my home," Abu tells Middle East Eye. "I came to fight and find my family. But when I arrived, they were gone."

Abu, whose last name has been changed to protect his identity, says he only joined the Iraqi army on Monday, 17 October, the day Iraqi forces launched the operation to retake Mosul.

His unit, part of the Iraqi army 15th division, fought IS militants in the open fields outside Raseaf, but the town itself was empty. Villagers had been forced to leave.

Abu says he spoke to his family four days before, after they arrived in Hammam al-Alil, the Islamic State stronghold on the western edge of the Tigris river. But after the first call, the phone appears to have been switched off.

"IS would shoot at the families to make them go. My family had a car. They took them by car," said Abu.

Abu's realisation came days before the UN reported that IS had forced thousands of civilians from their homes to use as human shields, and killing those who refused to comply.

The report, released last Friday, says the militants had moved civilians to locations of key strategic importance, such as Hammam al-Alil, as well as further north to Tel Afar and Mosul itself.

And the authors were at pains to point out their figures were not comprehensive.

In a recording released on Thursday the IS leader, Abu Bakr al-Baghdadi, called on his followers to fight to the last. "Holding your ground with honour is a thousand times easier than retreating in shame," he said.

It comes two days after Iraqi forces entered the outskirts of Mosul, meeting fierce resistance as they took their first real steps to recapturing and reoccupying a city that has for more than two years been at the mercy of IS.

And the group's apparent strategy of building up a mass of human shields has left eerily empty much of what territory has been captured in more than two weeks of fighting.

In the small and rural village of Shura al-Jedida, the situation mirrors that of Raseaf. Only one family is occupying the town.

Ahmed Abu, a thin and weathered 20-year-old ex-English student of Mosul university, puts it simply: “All the families here were taken by IS."

Ahmed and his family were lucky, seizing their chance to slip their IS captors at a village 7km south of Hammam at-Alil.

They walked for three days without food or water but were able to return to their home village.

It is a mixture of emotions returning to the village for Ahmed. “I feel now happy and sad,” Ahmed explained, “because a lot of families we don’t find in this village.”

Ahmed’s children ride bikes around the front yard, asking for photographs to be taken of them and showing a general inquisitiveness  in the new people who have showed up in their village, a sharp contrast to the urgency Ahmed speaks about the atrocities he saw under IS.

“If you belong to the Iraqi army or police, they kill you,” Ahmed told MEE. “A lot of youth was taken.”

Along the road back to Raseaf, families carrying duffle bags of personal items are seen walking south towards Qayyarah, the oil rich town liberated by the Iraqi army in late August this year.

The family is tired and frightened and reluctant to speak. They said that were from Hammam al-Alil.

“There are many new people there. Families are in abandoned buildings. They are in the streets,” said a male family member.

And IS has not finished yet.

In a UN press briefing on Tuesday Ravina Shamdasani, the spokeswoman for the UN High Commissioner of Human Rights, detailed further concern in monitoring long trucks and mini buses to Hammam al-Alil “in an attempt to forcibly transfer some 25,000 civilians towards locations in and around Mosul”.

“We have grave concerns for the safety of these and the tens of thousands of other civilians who have reportedly been forcibly relocated by ISIL in the past two weeks,” said Shamdasani.

As Iraqi security forces move into the eastern edges of Mosul city limits from the east, the forces pushing north from the southern front still have some 30km to go and a slew of small villages and hamlets to address before approaching Mosul.

The division camped out in Abu’s home will not be staying long. They will continue their push towards Mosul, but for Abu the journey north has come to an end for now.

“I searched for them: my brother, my mother, my sister. My sister’s child is only three years old,” he says. “I will stay here. I feel nothing." Iraq at War
Iraqi forces near IS ‘execution’ site in push on Mosul; al-Baghdadi vows no retreat Iraq at War
IS kills hundreds of prisoners in Mosul as offensive closes in: UN