Europeans marched alongside passionate Turks, Palestinians and Moroccans in Rotterdam on Sunday against violence in Gaza 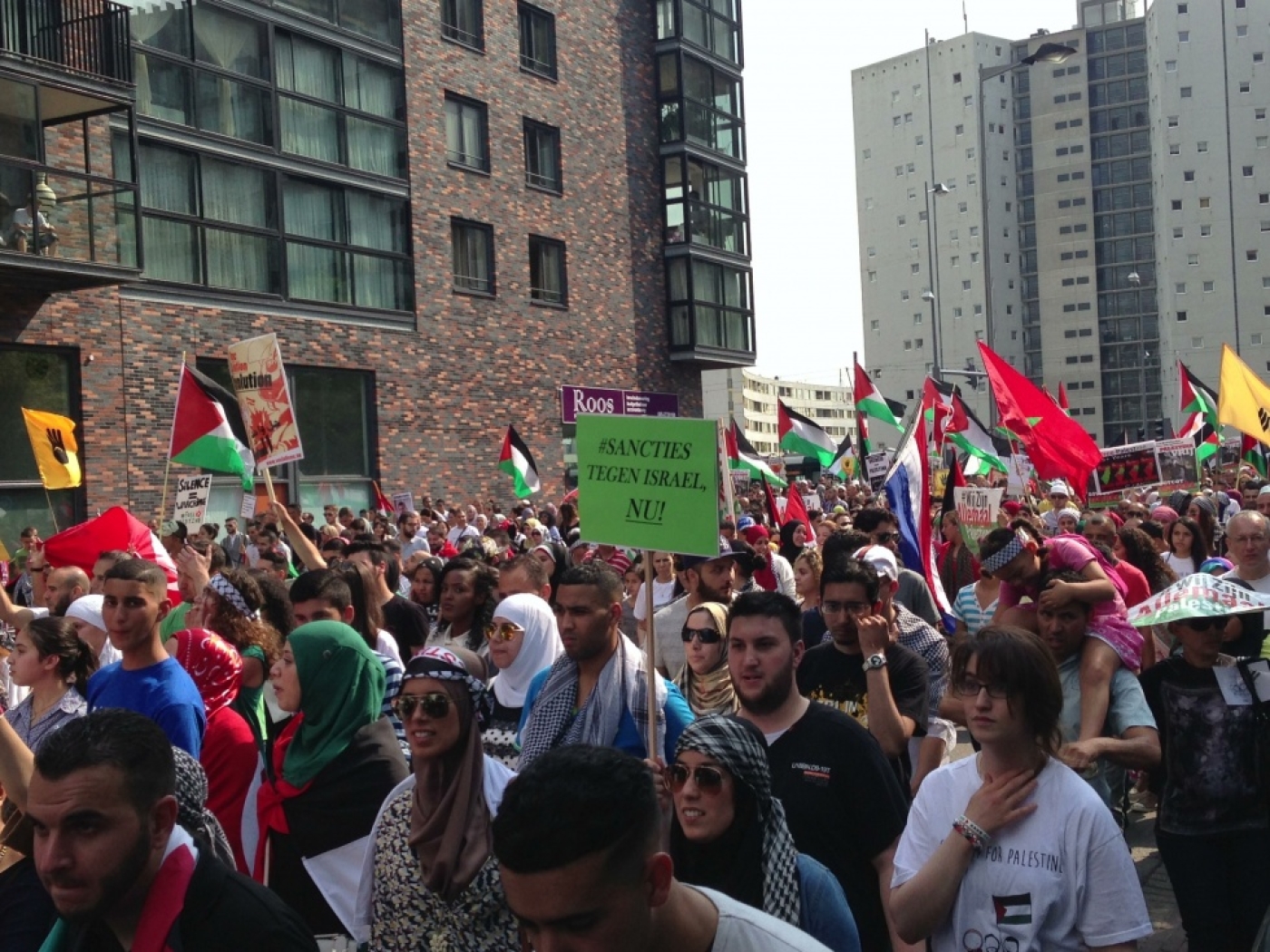 The organisers estimated that between 12,000-13,000 people showed up (MEE/Brenda Stoter)
By
Brenda Stoter

ROTTERDAM, THE NETHERLANDS- “In Rotterdam, we all know how it feels like to be bombed,’’ Nourdin El Ouali told the audience at Schouwburg Square.

El Ouali, co-organizer and leader of a political party called Nida, was referring to World War II, when the city was completely destroyed by the German air force on May 14, 1940.

On Sunday, 12,000 Dutch people gathered there to show support for the people of Gaza.  "Free Palestine", the protestors shouted, while holding Palestinian flags. A lot of protestors tied Palestinian scarves around their neck or head, some painted the flag on their cheeks and others showed pictures of children killed by Israeli strikes in Gaza.

Sarah (18) and Fatima (17), two teenage Palestinians from Vlaardingen, a town in the southern Netherlands, were marching to support family members living in the occupied territories in Israel, and to stand up for the victims in Gaza.

"I just saw a picture of a new-born baby whose mother got killed by an Israeli bomb attack. What’s happening over there is inhuman.  People are being massacred, but because they are Palestinian, the Western world doesn’t care,” Sarah told Middle East Eye.

Sarah and Fatima's parents are originally from Nablus, a city in the northern West Bank, approximately 49 kilometres north of Jerusalem. The last time Sarah visited her family was in 2013. During this holiday, she found out what it was like to live under occupation: There were many road blocks, which made it almost impossible to travel through Israel. For three days she was not allowed to leave her house after clashes broke out between Palestinians and Israeli forces. She can still remember Israeli forces destroying the homes of her neighbours.

"Palestinians do not want to live under occupation anymore. We want to live in peace with Israel, but [Israeli Prime Minister Benjamin] Netanyahu doesn’t want that. He wants to humiliate, kill us, so that we keep quiet,'' she added.

Sunday’s protest against Israeli violence in the Gaza Strip in Rotterdam turned out to be one of the largest pro-Palestine protests in Holland in years. The organisers estimated that between 12,000-13,000 people, mainly Turks, Palestinians and Moroccans, showed up. By shouting chants like “Netanyahu is a terrorist” and “Boycott Israel” they hoped to influence Dutch government policy on the situation.

But Israel and the Western politics were not the only targets. The protestors were also fed up with Western media coverage of the crisis, in which over 1,050 Palestinians – mostly civilians – have now  been killed. The violence has also claimed the lives of 43 Israeli soldiers and two Israeli civilians.

"When three Israeli boys were kidnapped, Western media constantly reported about that. When Palestinians are being killed, they call them 'others'. Those 'others' have names, families, jobs. What would we do if something like this happened in Europe?'' Kim Akdi from Youth for Palestine said to Middle East Eye.

Some Palestine supporters accuse Western media of being Islamaphobic.

“Western media is taking the side of the Zionists because Palestinians are Muslims and Western countries do not like Muslims,’’ a middle-aged man called Abdul  told Middle East Eye.

In the last couple of days, large anti-Israel demonstrations were also held in New York and Paris. Since the war on Gaza started 20 days ago, protests in support of Gaza erupted all around Europe and the US. A rally in Paris almost turned into a riot, with protesters looting shops and riot police lobbed tear gas and rubber bullets into the crowd. 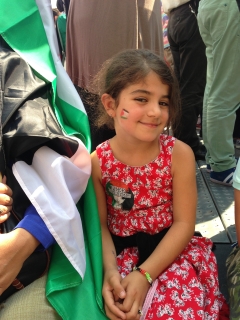 Genevieve, a 25-year-old woman from France who lives in The Netherlands, also joined the pro-Gaza demonstration. With a Palestinian scarf around her hips and two portraits of deceased Palestinian children in her hands she chanted that Israel should be held accountable for committing war crimes.

“Around 10 years ago you didn’t see so much support for Palestinians coming from the West. Today, I saw a lot of young people over here. This is good. It means something is changing. Israel is violating the rights of Palestinians. Innocents are being killed. It’s a tragedy,’’ she said.

Genevieve grew up with the Palestinian-Israeli conflict, she explained, because her parents always talked about the violation of human rights when she was a child. When Genevieve got older, she started to realize that she has to stand up for those who can’t.

“And I see a lot of Palestinian flags as well,’’ Genevieve said, adding that she is happy that she hardly saw any flags commonly used by Muslim extremist groups.

During previous protests in The Netherlands, some participants were waving black and white flags of the Islamic State (IS). Also, a few protestors shouted anti-Semitic slogans against Jews and showed Nazi symbols. The organizers of the protest in Rotterdam feared that the same thing would happen and had called on participants to bring Palestinian flags only.

Despite the directive, one group of young men waved a black and white flag that resembled that of IS. A young Palestinian man with a Palestinian flag tied around his shoulders asked them to leave.

In the middle of the protest was an old Turkish man  holding a yellow flag with a black Rabaa (Muslim Brotherhood) symbol. When being asked why he brought this one along instead of a Palestinian flag, he smiled.

“I know this is protest in support of Palestine, but I want people to remember the Muslim Brotherhood supporters who got killed by the Egyptian army after [former Egyptian President Mohamed] Morsi got ousted,’’ he responded.

The tour ended at the war memorial The Bow, next to the Maas River. Here, the Palestinian flag was hoisted symbolically.  The Israeli flag, which was displayed among other international flags on the Boompjes, a famous street in Rotterdam along the River Nieuwe Maas, was taken away by unknown protestors.