Reworked voting scheme may open the door for newcomers, but maintaining the sectarian balance remains the priority 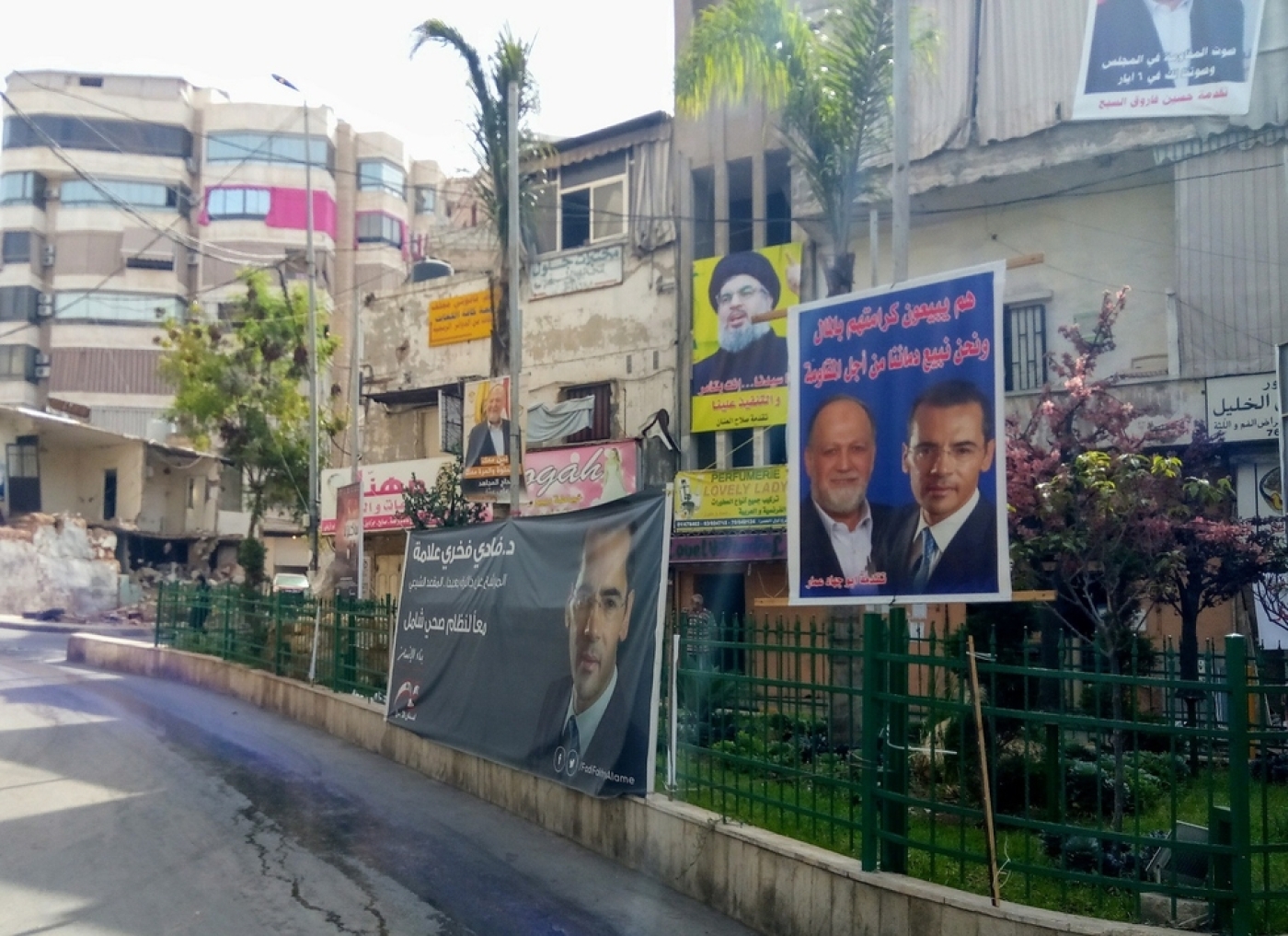 BEIRUT - Lebanon has scrapped its winner-take-all voting scheme for legislative elections on 6 May, implementing instead a proportional system that opens the door for smaller parties to make it into parliament.

The move is widely hailed as a step towards an inclusive parliament that reflects the population more accurately and could reduce the power of the dominant political forces.

However, the new election procedure consists of several legal stipulations, including the preferential vote and sectarian allocations, which make it the most complicated in the country's history.

The new scheme has to take into account the country's delicate sectarian balance, where seats across districts are assigned to various religious sects.

Lebanon has 15 districts in which candidates are competing for 128 seats.

Candidates cannot run on their own. They have to be part of a list - with a number of other candidates - that covers no less than 40 percent of the number of seats allocated for that district.

For example, in the northern Third District, which is allocated 10 seats, a list cannot have fewer than four candidates.

Another change is that the interior ministry will be solely responsible for ballots on election day. In previous elections, ballots were handed to voters by campaigners for various political parties.

In past elections, less popular candidates were able to slip their names onto the lists of other parties in a phenomenon known as "booby-trapped ballots".

The new law does away with this practice, but it also deprives voters of the ability to cast their ballots for candidates from various lists.

Money has become a major factor in the electoral process. It has made it nearly impossible for poor candidates to win

A voter can only select a slate in full with a preferential vote for a single candidate.

The individual vote must go to a local candidate from the voter's small district. Each large district has two or three small districts.

For a slate to win a spot in parliament, it would need to reach the electoral threshold, or minimum percentage of votes - the number of votes in a district divided by the number of seats.

After excluding the votes for slates that did not make the threshold, the votes are recounted. Each list gets as many seats as it has tallies - for the most part - and the list left with the highest fraction gets an extra seat.

Names of candidates on winning lists are then placed from the highest to the lowest preferential vote, regardless of what slates they are on.

Individual seat assignment then follows. Those who receive the most preferential votes are allocated sectarian seats for their district, which also covers seats won by their list. Religious quotas get filled first.

Hence, winners of the preferential vote from lists that cross the threshold do not necessarily make it into parliament.

Take a 10-seat district with two spots allocated to Maronite Christians as an example. If Maronite candidates from List A get the top preferential votes, List B's Maronites lose automatically, even if they get more individual votes than their colleagues on the list.

Technically, a candidate with one preferential vote can make it to parliament.

If the last available spot is for a Druze MP and List B did not field a Druze candidate, the slate would lose out on that seat, which would go to the next top Druze vote winner from an opposing slate.

Being left with seats for which they have no candidates is a real risk that incomplete slates face in several districts. 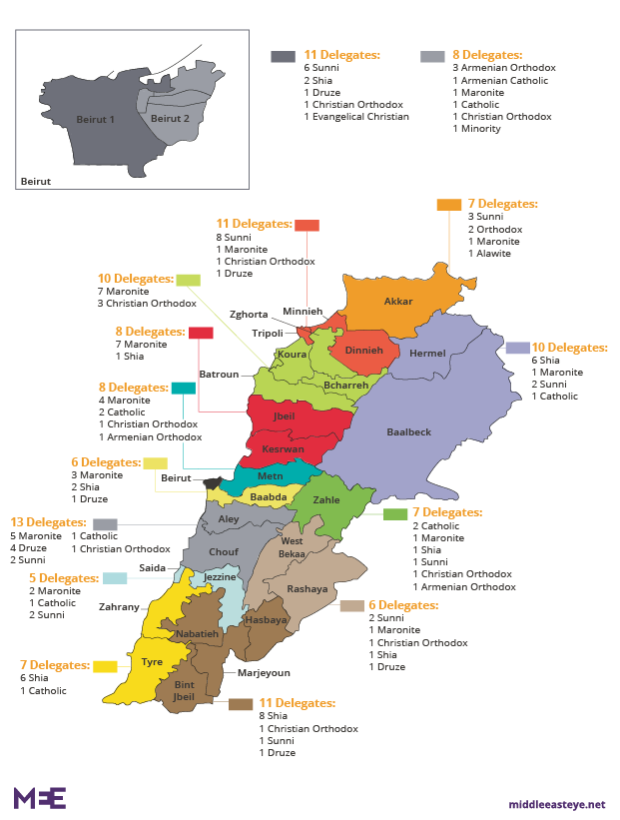 While gerrymandering is not uncommon even in Western democracies, some awkwardly drawn Lebanese districts stand out.

For example, the two small districts in the larger First South District are not geographically connected.

Beirut is divided into two districts separated by the old frontlines of the 1975-1990 civil war when the capital was split between Christian and Muslim militias.

Marwan Tibi, a journalist who is running in Beirut's Second District on the "Kelna Beirut" slate of civil society activists, called dividing the capital along sectarian lines a "catastrophe".

However, he praised the move to a proportional system, saying it provided voters with an opportunity to make choices based on political agendas, not personalities.

Another sign that the new law is lacking is how electoral tallies vary radically between districts. In the mostly-Christian First Beirut District, only 7,000 votes are needed to make the slate, whereas in some districts in the south and the north the number is more than 25,000.

The new rules have also raised the cost of running for office. All candidates must now pay a non-refundable fee of $5,300.

Moussa Khoury, a civil society candidate in Tripoli on the "Kollouna Watani" slate, said the fee puts a burden on aspiring politicians of modest means.

For a list of 11 candidates, the cost of merely appearing on the ballot would exceed $55,000.

The law has also failed to curb campaign spending, which Khoury said could run to up to $1m per candidate.

Several candidates have complained that media outlets, particularly TV stations, have exploited lapses in regulations to charge for normal coverage and interviews, which are usually considered free content.

"Money has become a major factor in the electoral process. It has made it nearly impossible for poor candidates to win," Khoury told Middle East Eye.

Also, there are concerns over the state's ability to properly enforce the law, especially since the interior and foreign ministries, which oversee the elections, are both headed by current candidates.

"This ruling political class has proven to us its failure as an executive branch," Tibi said.

He pointed to complaints of disorganisation at Lebanese embassies where expatriates voted on 27 and 29 April.

"We don't trust this authority; if we trusted it, we wouldn't have run and burdened ourselves," Tibi told Middle East Eye. Lebanon Votes
Hezbollah question hangs over Lebanese voting in US