On Monday, 11 August around 50 New Yorkers took part in a vigil to honor those killed over the past month inside Gaza and Israel. The event was held in a Manhattan park across the street from the UN. Two organizations, #IfNotNow and #JewsAndArabsRefuseToBeEnemies, formed in direct response to Operation Protective Edge, organized the vigil. Led by activists from both groups, the small crowd recited both Jewish and Muslim mourning prayers and lit candles that spelled out “WE ARE SORRY” on the ground. They also recited aloud the names of those killed from sheets of paper covered with names. The Israeli attack on Gaza has revitalized a dormant opposition movement against the occupation of Palestine throughout the United States. There is growing discontent with Israel’s actions against the Palestinian people, and some of the loudest voices are those of both Jews and Muslims, coming together to protest the injustice. In New York City, groups of youths who say they are fed up with the status-quo and the enfeebled response of world leaders to the latest bloodshed are making their voices heard through public actions, protests and public memorials to the victims of the latest violence. The diverse crowd, many of whom had come after hearing about the event through social media, was made up of Muslims, Jews and Christians. Members of #IfNotNow and #JewsAndArabsRefuseToBeEnemies as well as other participants told Middle East Eye that they were compelled to do something out of a belief in universal humanity and to call for an end to the senseless killing in the region. “I'm with #IfNotNow. It’s a group of mostly young American Jews who have come together to oppose the war in Gaza, call for an end to the occupation and for freedom and dignity for all Israelis and Palestinians. We see ourselves being grounded and acting out of Jewish values; that’s why we picked the name “If Not Now”. It's based on Rabbi Hillel’s three questions. It's a new group that sprung up in response to what was going on in Gaza but we're looking forward to continuing to build a movement inside the Jewish community to end the Occupation, now that it appears that there is a ceasefire.

Today we are a part of memorial service with #JewsAndArabsRefuseToBeEnemies. They asked us if we could lead the Jewish portion of the interfaith service and we're going to be doing a brief Kaddish [Jewish mourning ritual] service as well as some ritual Shiva actions associated with honoring the dead. We’re going to be reading some of the stories of the individuals who were killed as you would at a traditional Jewish Shiva.

I think it's critical for American policy makers and American Jewish establishment leaders to understand that people are really frustrated with the status quo and don't think that violence and occupation are inevitable, as we've been told. There’s a real constituency of people who want to see leadership and don't believe that the cycle of violence needs to continue.

I think that this moment is a real breaking point; it's a moment of truth for the Jewish community, and people coming out into the streets is an indication of the level of frustration with the direction that the community [has] been headed. The folks who are in positions of power need to understand that people reject the status quo and want to see a new vision that can lead to freedom and dignity for both people.” “This is the first protest for Gaza we've come to. I just believe that preconceived notions are a thing of the past. Peace and love should be the future for all of us. I was born Jewish but I lost my faith. [What’s happening in Gaza], it's almost like a genocide... It's like a prison camp. It’s an atrocity. I'm not going to say it’s like what the Nazis did to the Jews but it’s quite similar I believe. What's the point of history if we can't learn form our past and change? Ignorance breeds ignorance. War only leads to more hate, you have to just be able to diplomatically figure things out. Humanity is going to fall way back if we keep doing this.

When people think of Israel, they think that everyone there is Jewish. But no, there are Israeli Jews, there are Christians, there are Muslims. There are a lot of different people who go there. I support the thought of everyone being able to come to Israel as the Hold Land but not just for Jews. I think it's very important that everyone can [go there]. I’m representing my friend who lives in Kuwait. She’s Muslim. I'm representing a lot of people today. We're all the same when you think about it. We're all human. So coming here today is showing that we are all equal and there should be no superiority of races or creed. We're all human first.” “I'm from Long Island and just saw this on social media and thought I'd get myself involved. I'm not Muslim or Jewish but I'm a human and those people dying over there bleed the same way we do. I believe in life, that everyone should have the right to live, love and pursue their happiness.

I've been following the news, I get updates all the time on the people dying, and the cease fires and the broken ceasefires. It doesn't matter who is right and who is wrong, innocent people are dying, it's disgusting. I'm a firm believer in justice and one of my idols is Martin Luther King. He said injustice anywhere is bad for people everywhere. It's doesn’t matter where injustice is, it affects all of us; we're all one human race.

I think Americans should get more involved. What's it going to take? For [the violence] to come over here? We're lucky to be here, because we don't have to deal with that conflict every single day. It's a bad thing. I’m pretty young and the young generation should get involved with these world issues because it’s our world and we should be trying to find peace for everybody.” 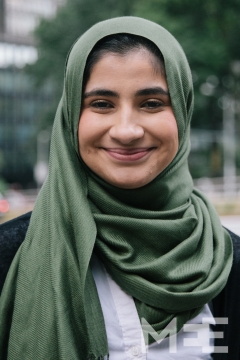 “I was born in Damascus, Syria but was raised in New York City my entire life. The #JewsAndArabsRefuseToBeEnemies page was created by Abraham [Gutman] and I when the violence in the Middle East, particularly in Gaza and Israel, started. A lot of hatred was circulating around our social media accounts. A lot of images were very disturbing. We wanted to do something about it. We had seen pro-Hitler remarks, we've seen anti-Palestinian remarks - "Muslims are terrorists" - that kind of thing and we wanted to do something about it. We created this page and it reflects a movement that is going on in Israel. That's how it started.

This kind of [action] is important because it unites different groups under one common cause, and that's peace. A lot of people don't want see or read that 2000 [Gazans] have died and over 10,000 have been wounded and 500,000 displaced. People need to say, "Enough of this violence!” It doesn’t matter what nationality or what religious group you identify with. People are human at the end of the day and if you're an innocent civilian you don't deserve this. Our world leaders should do something about it and they haven't.

We did not expect [such a strong response to the #JewsAndArabsRefuseToBeEnemies page]. It went viral very quickly, within the first week after we created it. But we're very happy to see such a response, we're very happy to see that so many people really care. So many people aren't so quick to say that they are against Palestinians or say they’re against Israelis. There's always another side to the story and I feel like this sort of initiative makes sure that people see that. So many people are being harmed because of this conflict and so many people want to take a unified stance and say, "Enough of this violence! Enough of the occupation! Enough of the slaughter of Palestinian civilians!"

My thoughts and prayers go out to those in Gaza who have died and those in Israel who have died. Its absolutely appalling and their deaths [are] our failure. We will no longer be silent and we will [make] our world leaders see that enough is enough.” 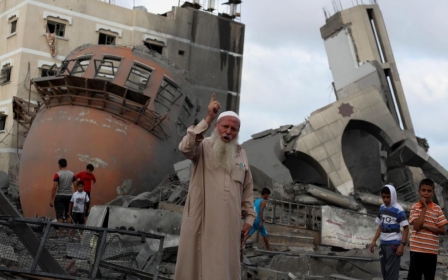 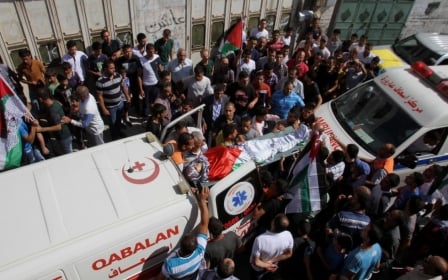