No ammo to fight IS in central Libya, says military 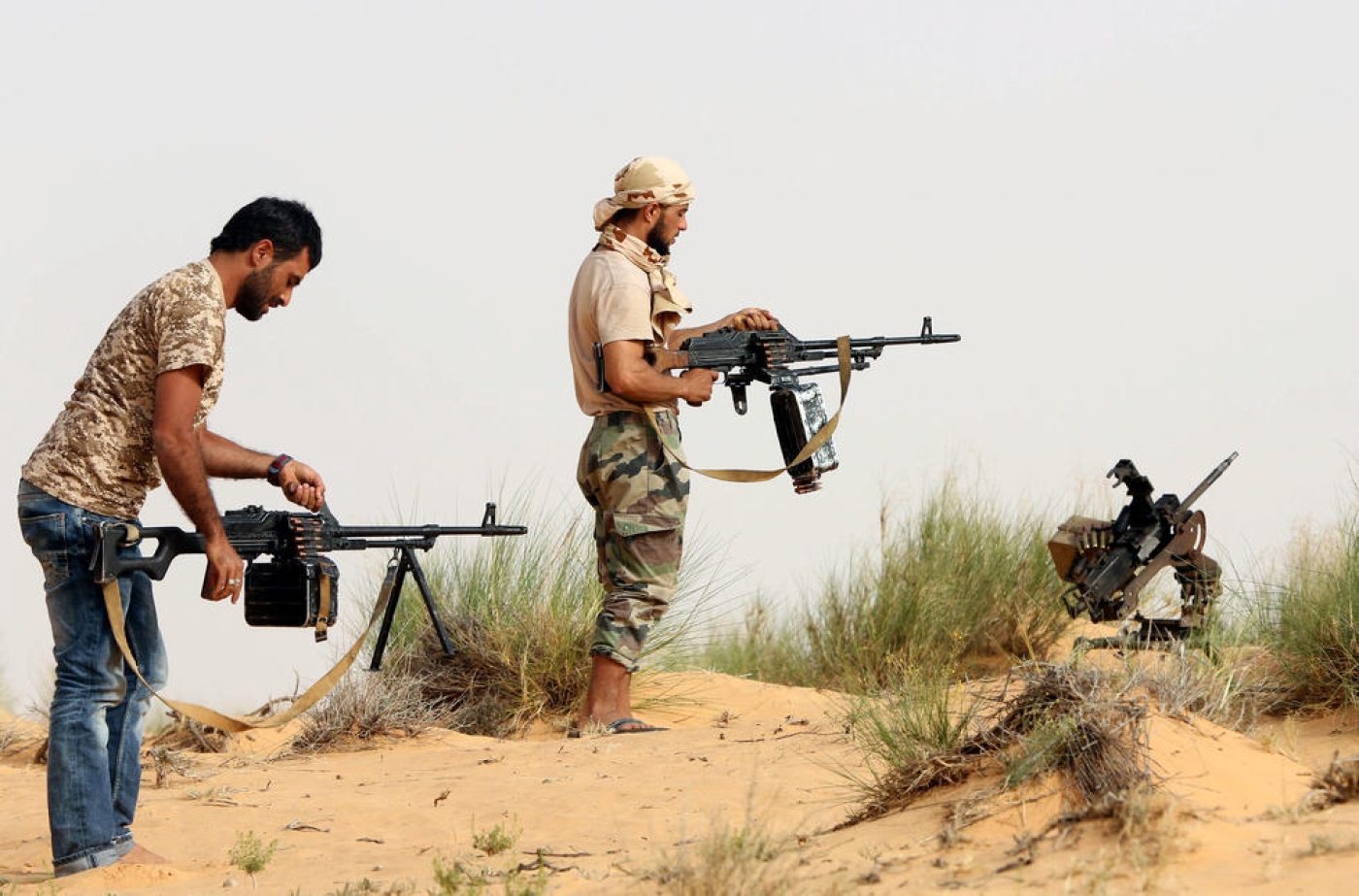 Fighters from the Fajr Libya (Libya Dawn) militia load their weapons in the vicinity of the Wetia military air base, some 87 kilometres west of the capital Tripoli, on 25 May, 2015 (AFP)
By
Tom Westcott

Forces loyal to the Tripoli-based government say they lack the ammunition, weapons and funds needed to fight a growing Islamic State (IS) presence on the central Libyan coast and have called for international assistance.

“We are asking the international community to give us the aid we need to defeat Daesh [the Arabic abbreviation for IS] in Libya because we are fighting this battle for the whole world,” Misrata Military Council Head Ibrahim Beitelmal told Middle East Eye. “We need people, equipment and the means to defeat such an enemy.”

The IS edged closer to Libya’s third city Misrata when militants took over the desert town of Nufaliya and gained a foothold in Sirte - 270 kilometres to the east of the city - in February.

The suicide bombing of a checkpoint on the outskirts of Misrata on Sunday was the latest in a series of attacks on the city’s security forces since it started fighting IS in Sirte.

“Effectively, Misrata is fighting alone against Daesh,” Beitelmal said. In three months of clashes in Sirte, Brigade 166 - tasked with fighting IS in the region - has not been able to defeat the militants which Beitelmal said number around 400.

Commander of Brigade 166 Mohamed Zadma said that, despite initial successes against IS in Sirte where 24 were killed and more than 39 injured on Sunday, the unit’s progress had been held back by equipment shortages.

“We can stay on the front line eating only bread and drinking only water, but forces can’t stay there without ammunition and weapons,” he said.

The lack of logistical support and six months of no wages had prompted fighters from other Misrata units to abandon their positions, including at the Al-Khalej power station on the outskirts of Sirte, Zadma said.

“When there were just 20 vehicles left at the power station, I was forced to give the order to Brigade 166 to leave Sirte airport and fill that void, because the power station is more important than the airport - it’s the highway to Misrata,” he said.

The withdrawal enabled IS to seize control of the airport and gain further ground in Sirte. Zadma described the airport as not “strategically important” because it was empty and claimed it could be retaken from IS forces in a single day once reinforcements arrived.

“We are also short of munitions because no one has given us any. We captured some ammunition from the enemy and we have some from Qaddafi’s stockpiles, but much of this doesn’t work,” Zadma said. He explained that his unit often had to buy ammunition from local people. These included fighters who pretended to be with the internationally recognised government in the east, stole ammunition from warehouses and then sold it to Brigade 166, which is loyal to the rival, Tripoli government.

No pay, no arms

Fighters with Brigade 166 have also not been paid for three months, but the Misrata Business Council has agreed to cover salaries to keep them fighting in Sirte. Acting Prime Minister of the Tripoli government Khalifa Al-Ghwail had also pledged support, Zadma said, but admitted his brigade was still waiting for the implementation of any of these promises.

“If the international community is really serious about fighting ISIS worldwide, it needs to give us a hand,” he said. “I am sure the EU and NATO intelligence knows everything about ISIS in Libya but they haven’t given us any help or information.”

Beitemal called on the international community to give direct support to the Misrata Military Council and lift the current arms embargo that prevents Libya from buying weapons. “The UN resolution is about giving weapons to the Libyan military fighting amongst ourselves, but it does not cover our struggle against terrorism,” he said. “Daesh is a problem for the whole world and Libya is fighting against international terrorism.”

Beitemal also suggested that a rapprochement with the internationally recognised institutions in the east was possible if they agreed to fight the IS together. “The civil war is an internal matter among the Libyan people and we can forget these problems if we agree just to fight the enemy of all of us,” he said. “No one is in any doubt of the importance or priority of defeating Daesh so we are willing to have this as the beginning of reconciliation for the Libyan people.”

However, Abdullah Al-Thinni, prime minister of the internationally recognised government based in eastern Libya, this week accused the Tripoli government of colluding with IS and handing over the entire town of Sirte to the militant group, according to the eastern-based news agency Lana.

Al-Thinni also renewed his plea to the UN to lift the arms embargo saying, without this, the “cancer” of IS, which the Libyan Army is fighting on several fronts in the east of the country, would continue to grow and future elimination would be difficult.

In Sirte, residents are increasingly desperate for help from either government. Whilst Beitemal claimed that 60 percent of the town remained under Misratan control and described the partial withdrawal a strategic move, Sirte residents said that Brigade 166 fighters were now only on the west side of the town, near the power plant.

This has allowed IS to strengthen its grip, imposing further regulations and arresting anyone daring to fly the Libyan flag in Sirte, local resident Ahmed said. Petrol stations had run out of fuel and there were concerns that basic commodities were running low, with delivery drivers now afraid to enter the town, he said.

“We can’t wait for a national unity government to be formed,” Ahmed said, referring to the UN attempts to secure a peace deal between the rival faction before the start of Ramadan. “We need help now.”