No easy return for Yemeni refugees stranded in Jordan 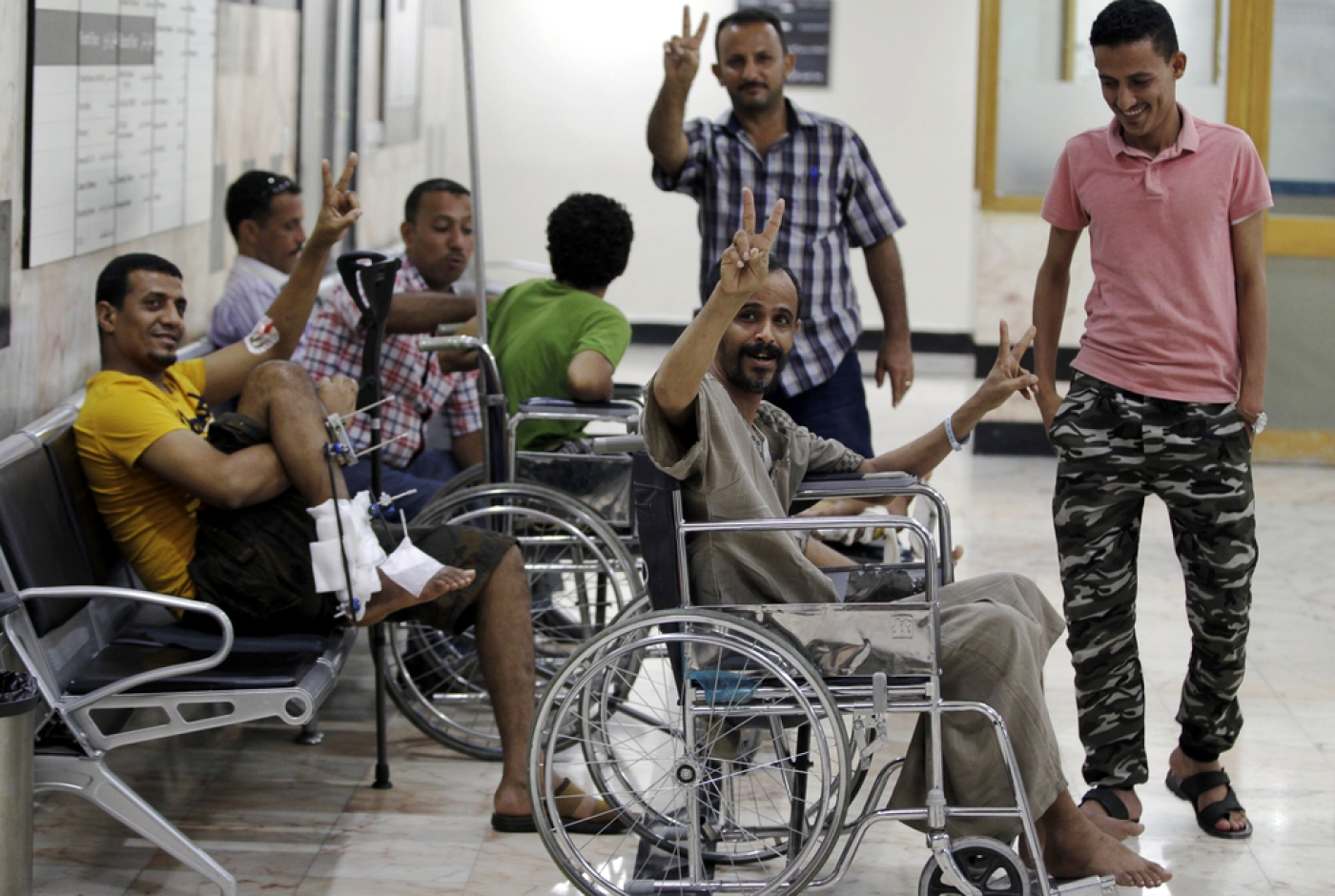 Yemeni men flash the sign for victory after receiving treatment at a hospital in the Jordanian capital Amman on September 6, 2015. (AFP)
By
Charlene Rodrigues

At first glance, the anxious crowds could be shoppers hunting for bargains in a department store on the first day of the sales. But this is the Yemenia Airways office in Amman, Jordan's capital, and the people jostling for position in the queue are Yemenis who, having fled their country's war, are now keen to return home.

The vast majority of those wishing to travel came to Jordan for medical treatment for either illness or war wounds sustained since fighting intensified in April. Having recovered, many have found themselves stuck for weeks or months, unable to obtain a seat on a flight, or even information about when flights are leaving.

The pandemonium intensifies when the manager, Hatem Al-Shabi, strolls in. One of the disgruntled passengers, Lutfi Salem, a general manager for a soft drinks company, told Middle East Eye: "This Yemenia office has a problem with the flights. We have no idea when or where the next flight is coming or going."

“Most of these passengers are from South Yemen in Aden. There are flights to Sanaa International Airport, but not to Aden. Why? Saudi Arabia and the coalition are heavily bombing Sanaa. Aden is safe, no problem and no aeroplane,” he continued, before rushing to register his name.

But Al-Shabi from Yemenia Airways said requests, including appeals to Saudi Arabia’s King Salman whose government owns a large stake in the airline, to increase the flights to Aden to twice a week, had fallen on deaf ears.

“There aren’t enough people going to Aden,” he said.

Salem came to Jordan from Aden in April to escape from escalating fighting, widespread disease, malaria and dengue fever. But now he has had enough. Apart from missing home, he said the cost of living in Jordan was staggering.

Individuals and families who are stranded in Jordan on UNHCR refugee status don’t have recourse to public funds and cannot work. This forces the refugees to either tap into their savings or turn to family for help.

According to the UNHCR, 1,628 Yemenis have registered as refugees in Jordan, but in total there are 2,029. When the war broke out, many more fled to Djibouti by boats.

“In Jordan you can finish $100 in a day. In Yemen that will last a fortnight,” said medical doctor Rana Shabi, waiting to buy a ticket for her mother.

Mohammed Badr Abdullah, who is studying dentistry at the University of Aden, left as Houthis rebels from northern Yemen invaded the south of the country.

“I decided to pull my six sisters out quickly. Two days after we arrived in Amman, the Saudis started bombing Yemen,” he told MEE.

“My house there has been destroyed completely. I have been waiting here for three weeks to get tickets to Aden. Every day we come here to check the flights and the schedules. Now they've stopped the flights, and then they say come next week, there will be a new flight."

Abdullah is keen to rebuild the house that was ravaged after 120 days of war, but is unsure how much the government will pay for reparations. “We wrote our name down to get some money from Hadi, who will in turn get the money from Saudi Arabia.”

An infuriated customer rushes to the front and waving his hands shouts, “Filoosa, filoosa, mahfish filoosa,” signalling, “They are charging money for the ticket, I don’t want it.”

A one-way fare to Aden or Sanaa costs $600, including insurance. The printout from a dot-matrix printer provides little information of what the insurance covers, but many of the customers are too exhausted to bother.

However, Abdullah who was waiting said: “This is the first flight where they are charging people. I know many families who are struggling. And the injured people are stuck and they cannot go back because they have no money.”

“We have no idea about this. All the direction comes from Saudi Arabia. I have been waiting for a month. Every day we come here to find information on the flight and they have no idea," Salem added.

Al-Shabi said most of her family were back in Aden and that her mother wanted to go home.

“My sisters, brothers are in Aden. She wants to go back and be with them. She has been here for a month or so,” she said.

“Home is home for my mum. It’s not difficult to get out. In war people run out without money or without clothes and you can imagine how difficult life is outside your country. So whenever you hear the news, even if the situation is no good, it is 10 times worse elsewhere."

Yemenia's website announces daily flights between Sanaa, Yemen's capital, and Amman, but the reality is different.

Ownership of the company is divided 51-49 between the Yemeni and Saudi governments, according to the company’s website. But employees at the organisation unwilling to be named told MEE there had been significant operational challenges since the beginning of the Saudi-led coalition's intervention in Yemen in March.

“It's no longer Yemenia airlines, it’s Saudi airlines,“ smirked another. “Saudi Arabia are stealing us, they are not grateful for what they have. They want more and more, and don't care how they get it,” continued the employee from Yemenia Airways.

On Monday, a flight that was meant to depart Aden from Amman airport at 7am was irreversibly delayed, and eventually cancelled at 5pm. Passengers were taken to hotels to fly the next morning.

Abdullah Awasseleh, travelling with his 85-year-old father for medical treatment, was horrified by what had happened.

"It’s not so much about the money, my father is in a wheelchair and he has been here all morning," he said.

“The runways are open from 5.30am to 12.30pm, but that keeps changing. If we don’t fly during these specified hours Saudi will shoot the flight down. They are capable of anything,” he said.

“Hadi or Houthi don’t care about the country or the people, they are two faces of the same coin. Of course we don’t enjoy Saudi interfering in our operations, but Hadi is an employee of Saudi Arabia,“ he said.

Meanwhile, even as the coalition heavily pounded Sanaa on Monday, Mohammed El-Shajar, a Yemeni oil field engineer who had been working in Iraq, purchased a ticket to return home.

After his transfer from Iraq to Saudi Arabia, he said he had been waiting more than six weeks in Jordan to secure a visa for Saudi Arabia.

“I couldn’t get the visa from Yemen as the Saudi embassy in Yemen has been closed. I tried Oman, during Ramadan. But the embassy in Saudi Arabia refuses to process the visa, and insists I should get it from Yemen.”

El-Shajar had been trying to obtain a residency visa from Saudi Arabia to relocate his family there, but changed his mind and decided to return to be with them as the bombing campaign intensified.