No smoking, no sexism: Progressive Iraqi village hopes to be model for a nation 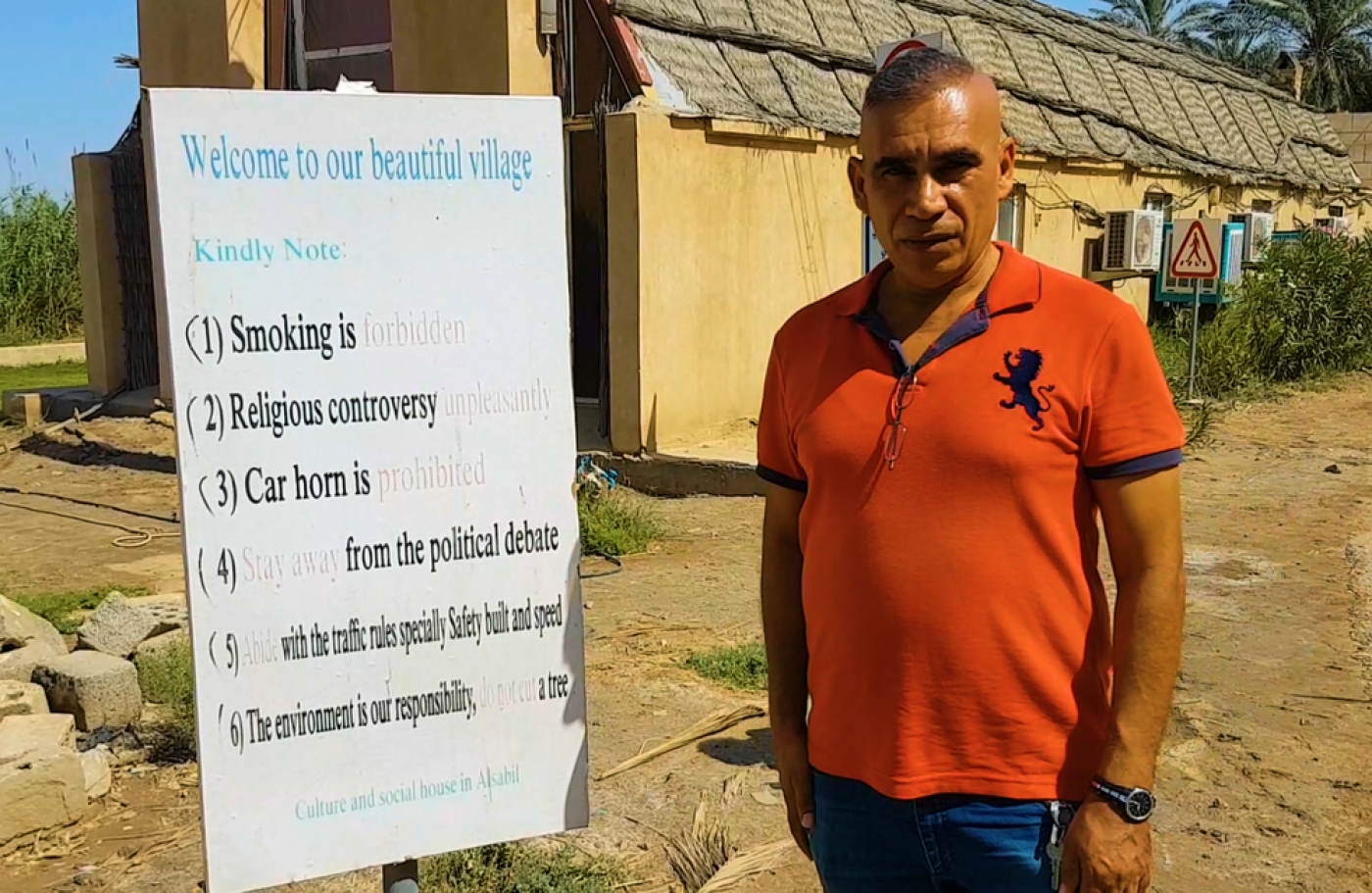 DIWANIYA, Iraq - Diwaniya province in southern Iraq is one of the most impoverished areas of the country. Most of the population are rural farmers, which made a drought in April all the more devastating.

The streets of Diwaniya city, like much of the rest of Iraq, are covered in rubbish and are choked with the exhaust fumes and the endless blaring horns of cars.

Just outside of the city sits the village of Al Bu Nahid, where residents are setting out to create a new idea of what Iraq could look like.

At the entrace to the village are two signs - one in English, one in Arabic - that set out a number of (loosely enforced) rules to be observed in the village:

5. Abide by the traffic laws

6. No cutting down trees, as "the environment is our responsibility"

In a country where more than 30 percent of the male population is clinically obese, the village has banned soft drinks and instead hosts an annual running festival which attracts thousands of participants.

In a country where oil is at the heart of the economy and politics, Al Bu Nahid celebrates World Environment Day on 5 June and carries out environmentally friendly initiatives.

In a country where the price of petrol is $0.63 per litre, bicycles rather than cars, are the preferred method of transportation in the village.

The village's initiatives are largely the brainchild of Kadim Hassoon, a local engineer who began implementing a number of projects in the village after travelling around Europe and the Middle East and being exposed to new ideas about health, social attitudes and the environment.

Hassoon returned in 2014 after 18 years in Dubai, and attempted to maintain a running-focused fitness regime, despite incredulity from other residents.

"Everybody was looking at me like I was a strange person but I continued," he told Middle East Eye.

Decked out in a tracksuit and running shoes, he kept up a regular jogging routine around the rural landscape.

"After one month, some people joined me. After two months, I had five people running with me. Frankly after six months, most of the people here - especially the teenagers and the people in their early 20s - were going with me."

As the running sessions increased in popularity, the participants eventually came up with the idea of establishing a "festival" of running. Every year people come from outside the village including from the city of Diwaniya, to take part in the event - Hassoon said 3,000 people regularly attended.

The surprise success of the festival which also attracted media attention, inspired Hassoon to create more projects to address what he saw as the various social ills afflicting his village, and Iraq as a whole.

Signs prohibiting car horns and smoking - both ubiquitous in Iraq - are dotted around the village. Hassoon is keen to stress that there is no authoritarian enforcement of the ban, but breaking the rules risks ostracisation by the rest of the village who have enthusiastically supported the changes.

A small, rundown building near the river is the Cultural House. Inside are shelves of fiction and non-fiction books on a wide variety of subjects, as well as creative materials for painting and crafts.

"I established the Cultural House and then I made a library - many people from inside the country and outside the country helped me by sending books, even from the UK, US and Sweden," said Hassoon. "Most of the book houses in Baghdad sent me books."

Walking around the Cultural House he showed off artwork created by local children. An artist came from Baghdad recently to help children produce a painting celebrating the role of Unicef.

Adorning the wall are pictures of some of Al Bu Nahid's patrons, including British-Iraqi writer Emily Porter, who has provided financial support to the village's initiatives.

"I really admire the new things that are going on in this village - all of this because Karim has made an effort to improve the situation with the help of people from the village," said Ali Ghanem, one of the village's 750 residents.

"We felt that sport was really good for us so we made the championship for running 200 metres. Then we changed other things, we prevented the soft drinks and smoking.

Two issues which Hassoon sees as major sticking points in building his ideal community are sectarianism and the marginalisation of women.

"In this area, the [Middle East], I think the main issues that we are fighting over are because of religion," he said.

He said all the major problems afflicting the region were so often filtered through the prism of religion. Putting a block on this has been one of the village's main aims.

"I say if you want to talk about religion, I say, okay, first go to the Cultural House, take any book on the religion and read it. Then come and discuss this matter."

And on the issue of women, he said the struggle had been even harder, particularly considering the "mentality" of people living in the villages in southern Iraq.

"I have two days for the ladies in the Cultural House," he said. "For these two days, the men cannot go inside, only the ladies."

Women in the village have access to numerous lectures and regular visits with NGO workers on social, medical and psychological issues.

Compared to other villages, the rigid segregation between the sexes in many areas of life is loosened.

Women in Al Bu Nahid go into the village hall, something that is not seen in other communities, where such venues are exclusively for men, said Hassoon, referring to the large thatched building at the entrance point of the village.

"But we broke this matter. We said 'no, there is no difference between you and her. She lives just the same, like you.'

"But this matter still needs time," he added.

The success and gradually spreading fame of Al Bu Nahid has led other villages and cities, to come and learn from its initiatives.

With the defeat of the Islamic State group, Iraq is seemingly finally emerging from the shadow of sectarian violence and the accompanying atmosphere of fear and repression.

As war and violence recedes into the background, Iraqis minds have begun to turn to the numerous social and economic ills afflicting their country.

For Hassoon, Al Bu Nahid presents a possible blueprint for how Iraq could begin to rebuild itself and create more open, healthy communities.