'No way back' for the Muslim Brotherhood in Sisi's Egypt 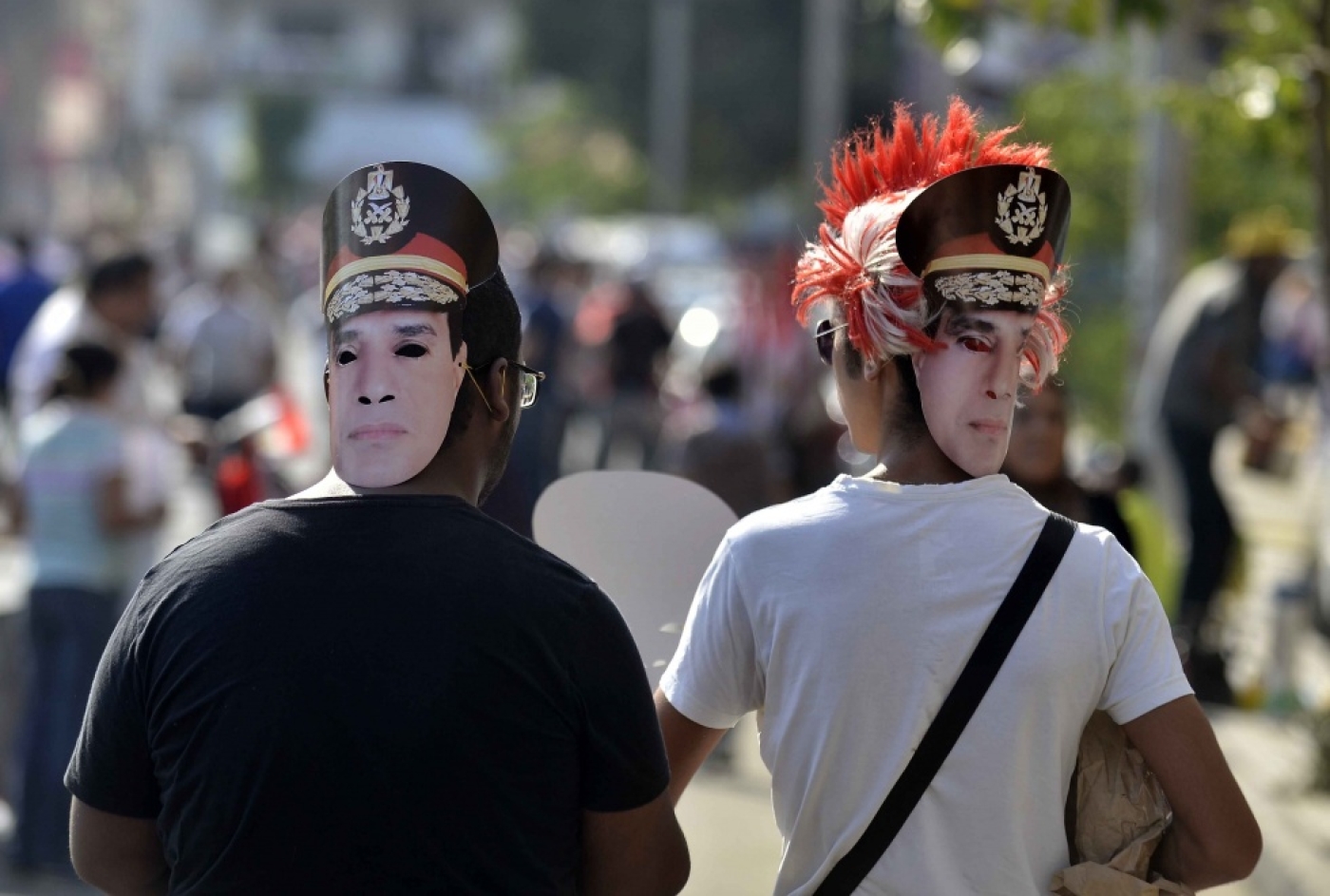 Egyptian presidential candidate Abdel Fattah al-Sisi used a television interview aired late on Monday to declare that, should he win the upcoming general election, “there will be no way back for the Muslim Brotherhood”.

In the interview with broadcasters Lamis al-Hadidi and Ibrahim Isa, he also fielded questions about his potential policy towards those detained under a controversial law that bans public demonstrations.

When asked whether he would use his presidential powers to pardon them, he replied simply: “That is a decision for the judiciary.”

The debate, publicised as Sisi’s first interview since officially announcing his candidacy on 27 March, was aired simultaneously on two of Egypt’s most-watched satellite television channels.

On the topic of religious rhetoric in other countries, he declared:

“I think that religious rhetoric throughout the whole Muslim world strips Islam of its humanitarian aspect.”

Later in the interview he stressed that the power to lead is granted by God, and can also be stripped away by God.

However, he appealed to religious pluralism, saying he had grown up in a more liberal era.

“I was brought up in an area that had a synagogue for the Jews, a church for Christians and a mosque for Muslims and I witnessed no aggression against them.”

One of his interviewers, al-Hadidi, invited Sisi to tell viewers a little about his life before he joined the army.

He replied saying: “Who am I? I am Egyptian and a Muslim. I am an Egyptian Muslim who loves his country, his religion and the people.”

Questioned as to why he had decided to announce his candidacy while wearing his military uniform, he answered in a quiet voice:

“This uniform, to me and to Egyptians too, has great value”, going on to say that he had chosen his attire “to say thank you” to the army.

On the subject of the Muslim Brotherhood, Sisi was straightforward:

“There will be no entity called the Muslim Brotherhood” should he be elected.

He went on to say that Khairat El-Shater, the Brotherhood figure currently standing trial, had threatened that foreign fighters would enter Egypt “if anything happened to the Islamist president Mohamed Morsi. I told him that anybody who raises a weapon against the army, we will obliterate him from the face of the earth.”

Questioned as to whether Egyptians should choose him in the ballot on the basis of his promises to eliminate the Muslim Brotherhood, he said simply:

As for the recent surge in violence in the Sinai Peninsula, claimed by separate groups like Ajnad Misr and Beit Ansar al-Maqdis, Sisi said it could be eliminated “within an hour”, but that the army was taking pains to minimise harm to “women, children and the elderly.”

When asked about how he planned to address Egypt’s problems, he said:

“I am not talking about the problems, because the commentary in the period just passed has been very strong. Egyptians understand that there are very big challenges, and I don’t want to repeat all that talk.”

However, he called Egypt’s rate of unemployment “shameful.”

He also critiqued Egypt’s former leaders for failing to communicate with the people, and promised that if elected he would not keep a low profile.

In the interview, he alluded to two assassination attempts, but gave no further clarification as to whether these occurred before or after the 30 June 2013 ouster of former president Mohammed Morsi.

Despite these risks, he went on to say that his family had approved of his candidacy because of their “love for the homeland and out of fear for its future.”

For him, running for presidency is a patriotic duty.

He said that “any responsible Egyptian who is capable of stepping in to save the nation, must do so … the country is being targeted from inside and out.”

The interviewers invoked the memory of Egypt’s late populist President Gamal Abdel Nasser, but Sisi denied the possibility of drawing a comparison, saying:

“I wish I was like Nasser. Nasser was not just a portrait on walls for Egyptians but a photo and voice carved in [Egyptians’] hearts."

Al-Bawaba News predicts that security concerns in Egypt, which has seen an uptick in attacks on military personnel in recent months, will mean that candidates mainly rely on private interviews and media appearances to conduct their campaigns.

A public opinion poll conducted by the Egyptian research centre Baseera over the weekend found that 72 percent of respondents currently back Sisi, with only 2 percent reporting their support for the only other candidate, Hamdeen Sabahi.

Elections are scheduled to be held 26-27 May.

Egyptian daily al-Masry al-Youm reported just prior to the debate that Qatar had begun expelling key figures from Egypt's Muslim Brotherhood, including Mahmoud Hussein, the group’s secretary general. However, the daily's accounts - as well as other reports in recent weeks rumouring the eviction of Brotherhood figures from the Gulf country - have not been substantiated. Hussein's expulsion, the daily reports, is part of Qatar’s efforts to implement the "Riyadh Agreement", a deal aimed at healing the recent rift between GCC member states.

The agreement, the details of which have not been announced, was reached on 18 April after a meeting in the Saudi capital.