Fighters from the al-Nusra Front, al-Qaeda's Syria branch, hold a position as they fight against forces loyal to the Syrian government in December 2014 (AFP)
By
MEE and agencies

"Between Monday and Tuesday, al-Nusra Front seized at least five rebels from Division 30 in the village of Qah, near the Turkish border," Syrian Observatory for Human Rights chief Rami Abdel Rahman said.

Abdel Rahman said the rebels are from the Free Syrian Army's Division 30, the same unit from which Nusra captured eight others last week.

It would appear that the kidnapping of the rebels, who are thought to have been trained in a new, multimillion dollar US programme and whom the Observatory called US-trained, has been a watershed moment for US policy in Syria.

On Friday, in the first strikes against any group other than the Islamic State in Syria, the US conducted air strikes on al-Nusra fighters who had launched an offensive against Division 30's headquarters. At least 25 members of al-Nusra were killed, according to the Syrian Observatory.

On Sunday, US officials said they would now use airstrikes to defend US-trained rebels from any attacker, including forces loyal to Syrian President Bashar al-Assad with whom the US has avoided direct confrontation.

Then on Monday, the Pentagon said the US military had started conducting armed drone missions out of Turkey last weekend. Drones had already been flying out of Turkey, so the only change is that the drones are now armed, CBS News reported.

Eventually, officials said, the US will conduct manned flights out of Incirlik airbase, but must first set up search and rescue capability.

Since the US began its air campaign in Syria last September, there have been reports that al-Nusra positions have been hit, including on the first day of airstrikes. But it is only on Sunday that the US has given an explicit sign that it would target groups other than IS.

Abdel Rahman said Nusra is currently "hunting down" US-backed rebels in Aleppo and Idlib provinces. The five rebels captured on Monday night had taken refuge at a camp for internally displaced people in Qah in Idlib.

Responding to question from Middle East Eye, US officials have denied that the kidnapped rebels were US-trained. However, some have pointed out that the denial could simply mean that those abducted were in the US programme, but Turkish-trained.

Since the abduction, Nusra has released a statement and a video, suggesting that the rebels are Western collaborators.

"The co-operation and co-ordination between Division 30 and the coalition planes, which hurried to back up the fighters by bombing al-Nusra Front positions, is now clear to everyone," said the statement released on Friday. 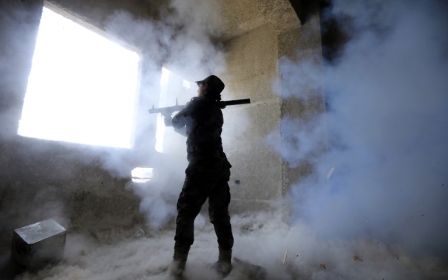 Syria War
US to defend Syrian rebels with airstrikes: Reports