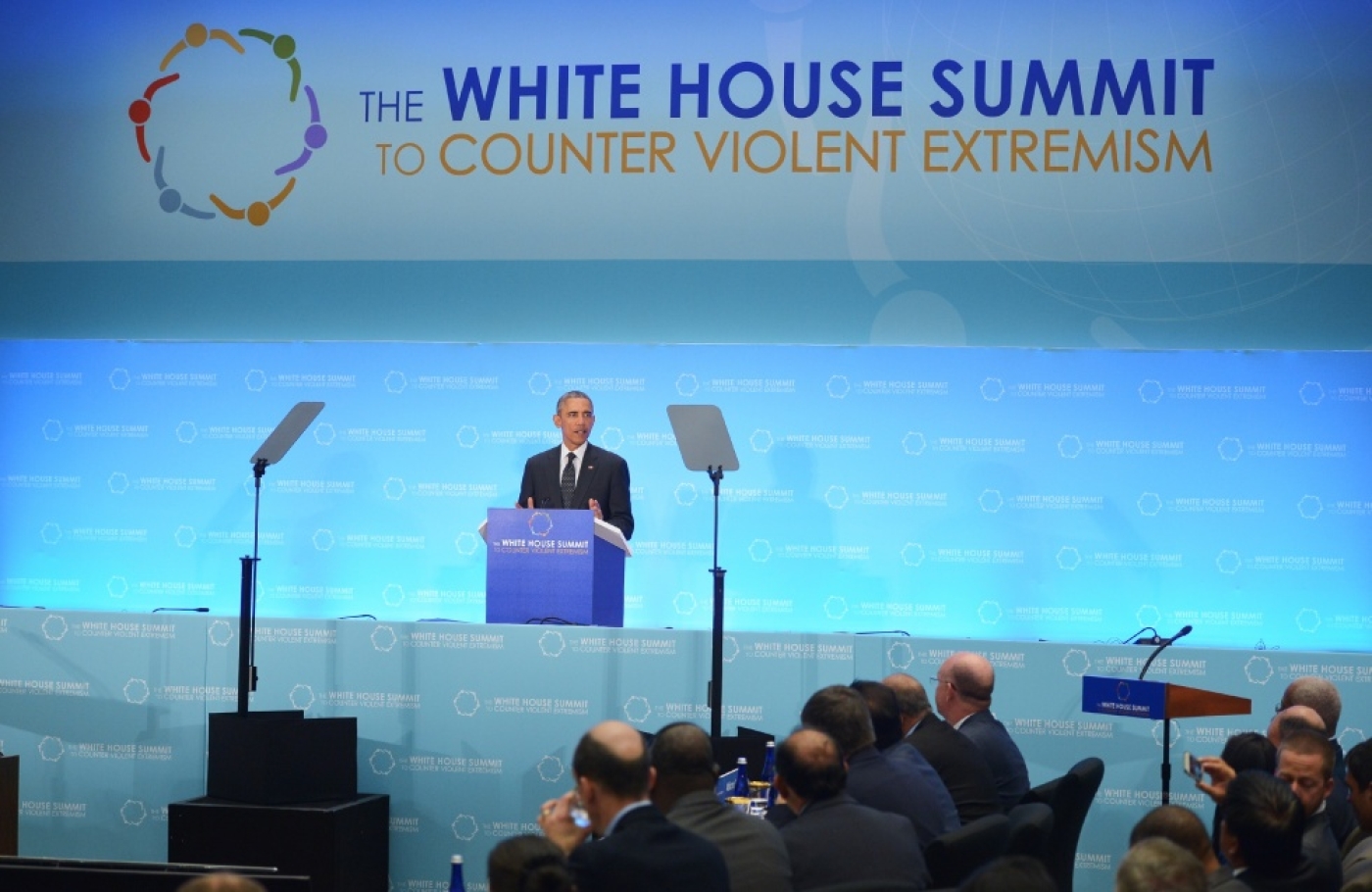 US President Barack Obama speaks at the White House Summit to Counter Violent Extremism at the State Department on 19 February, 2015 in Washington, DC (AFP)
By
MEE and agencies

As Syrian President Bashar al-Assad's government fomented tensions and led a "war against his own people," former Iraqi Prime Minister Nouri al-Maliki’s government "helped to pave the way for ISIL’s gains there" by failing to govern inclusively, Obama said.

"Across the region, the terror campaigns between Sunnis and Shiite will only end when major powers address their differences through dialogue and not through proxy wars," the US president added during remarks at a White House counterterrorism summit.

The summit focused heavily on the importance of gaining grassroots support within Muslim communities to stem the rise of groups such as IS and al-Qaeda's affiliates including Syria’s al-Nusra Front, and the Yemen-based al-Qaeda in the Arabian Peninsula.

Obama encouraged Muslim community leaders to "push back not just on twisted interpretations of Islam, but also on the lie that we are somehow engaged in a clash of civilizations."

"That narrative becomes the foundation upon which terrorists build their ideology and by which they try to justify their violence, and that hurts all of us, including Islam and especially Muslims who are the ones most likely to be killed," he said, adding that the notion that the West is at war with Islam is an "ugly lie."

"All of us, regardless of our faith, have a responsibility to reject it," he said.

Obama urged world governments to address the grievances – political and economic – that terrorist groups exploit in their efforts to draw new recruits.

"When people are oppressed and human rights are denied, particularly along sectarian lines or ethnic lines, when dissent is silenced, it feeds violent extremism," he said.

Obama has come under fire, primarily from congressional Republicans, but from some Democrats as well, for refusing to use the term "radical Islam" to describe the threat posed by militant groups.

"All of us have a responsibility to refute the notion that groups like ISIL somehow represent Islam," he said, calling their attempts a "falsehood".

Turkey, US to train Syria rebels to fight IS

The United States and Turkey on Thursday signed a deal to train and equip thousands of moderate Syrian rebel forces after several weeks of talks, officials said.

"Turkey and the United States signed a document a short time ago on the train-and-equip (programme)," Turkish Foreign Minister Mevlut Cavusoglu told reporters.

A US embassy spokesman, contacted by AFP, confirmed that the deal was inked in Ankara by Turkish Foreign Ministry Undersecretary Feridun Sinirlioglu and US ambassador to Turkey John Bass.

The announcement puts an end to months of difficult negotiations between the NATO allies on how to train Syrian rebel forces and which enemy they should focus on.

Turkey, a vocal critic of Syrian President Bashar al-Assad, wants rebels factions to be trained to battle both the government in Damascus as well as the Islamic State (IS) insurgents who have seized large chunks of territory in Iraq and Syria right up to the Turkish border.

Washington, whose aircraft target IS positions in Syria, wants to train the rebel forces as part of its fight against IS.

"Those forces will fight both Daesh and other terrorist organisations on the ground, as well as the regime," Cavusoglu said, using an alternative name for IS.

The US government hopes the programme can begin by late March, so the first trained rebel forces can be operational by year's end, according to the Pentagon.

The goal is to train more than 5,000 Syrians in the first year of the programme, and a total of 15,000 over a three-year period.

The fighters will be trained in the Turkish town of Kirsehir in central Anatolia.

The details of the agreement were not immediately clear but the train-and-equip programme is seen as a way for both sides to find common ground.

Ankara's reluctance to take robust action against IS militants has strained ties with the US, which is pressing Ankara for the use of Incirlik air base in southern Turkey to facilitate US jet strikes on the radicals.

Turkey, however, has refused to succumb to the pressure and set several conditions for playing a greater role in the US-led coalition against IS.

Those included the creation of a no-fly zone, as well as the training of moderate Syrian rebels, with an ultimate goal of bringing down Assad's rule.

Last year, Turkey granted permission for the passage of Iraqi Kurdish peshmerga forces through its territory to fight against IS in the Syrian town of Kobane across the border.

Turkish President Recep Tayyip Erdogan told the Hurriyet daily on Sunday that he no longer enjoyed good relations with US President Barack Obama, in part over their differences on how to respond to the conflict in Syria.