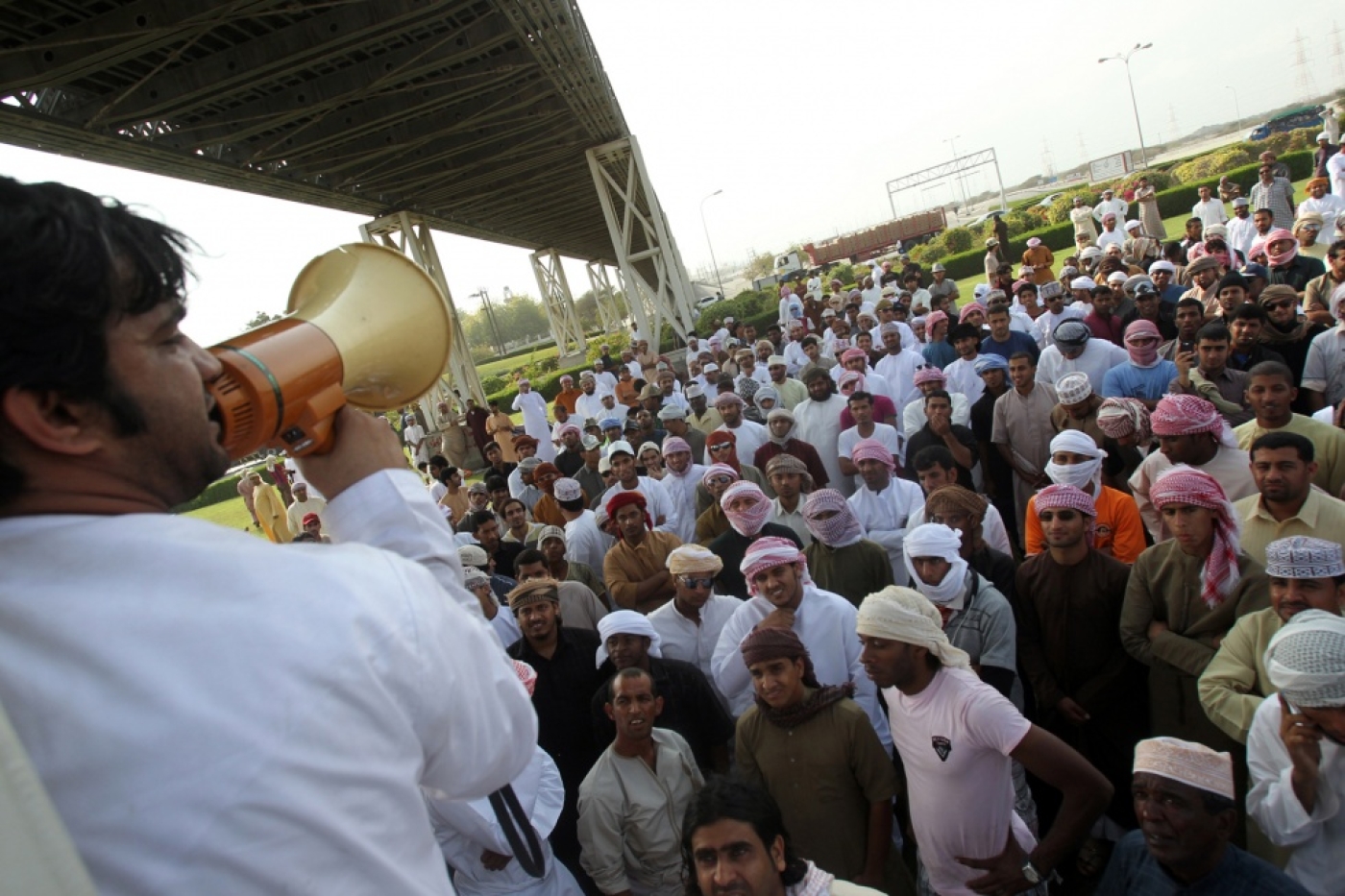 Some 700 protesters block access to Oman's second biggest port on in Sohar, more than 200 kms northwest of Muscat on 28 February, 2011 (AFP)
By
Linah Alsaafin

The arrest and sentencing of Talib al Maamari, a parliamentarian and Shura council member of Oman’s government, to four years in prison in 2013 for participating in an environmental protest earlier that year has prompted a number of human rights organisations to issue statements calling for his release.

Residents from Liwa, a town near the port of Sohar in the Batinah province, protested in front of the Sohar industrial port gate on 22 August 2013. The protesters were concerned about the health risks and industrial pollution associated with a petrochemical industrial complex in the city. The town is huddled between an aluminium smelter, a mining company and a refinery. According to locals, birth defects, respiratory problems and cancers have been on the rise because of industrial pollution, with no efforts being made to ensure the chemical waste is disposed of safely.

Al Maamari was acting as an intermediary between the security forces and protesters. Security forces used tear gas to disperse the protesters and a number of arrests were made.

Under Oman’s Basic Law, citizens have the right to peaceful assembly “within the limits of the law”. Such a caveat holds that assemblies of more than nine people require de facto approval from the authorities.

Al Maamari was arrested before dawn two days later by the Omani police force. Being a parliamentarian, he is entitled to immunity, unless the chairman exercises his authority to revoke that privilege or if there is a two-thirds majority vote by the members of the council in favour of arrest. Chairman Shaikh Khalid Bin Hilal Bin Naseer Al Maa’wali denied on Twitter that he decided to lift al Maamari’s immunity.

Al Maamari, elected to the Shura Council in 2011, was known for his outspoken views regarding public health policies and the protection of the environment in Oman. He was sentenced to three years for undermining the state, and one year for banditry (blocking the roads) and illegal gathering, in addition to a fine of 700 riyals ($US1,800) for acting as an intermediary in the 22 August protest between the demonstrators and the security forces.

The United Nations Working Group on Arbitrary Detention (WGAD) urged the Omani authorities to release him immediately, stating that his arrest is arbitrary and that he has a right to freedom of expression. The statement came after a bout of successful lobbying by the independent human rights group Alkarama last year, bringing attention not only to Al Maamari’s arrest but also to the arbitrariness of his trial. Initially released on bail in October 2013, al Maamari was rearrested on the same day and has faced several retrials until the final verdict was issued on October 2014.

“The case against Talib al Maamari appears to be politically motivated and based solely on his participation in a peaceful protest,” said Hassiba Hadj Sahraoui, deputy director of Amnesty International’s Middle East and North Africa programme. “Al Maamari is a prisoner of conscience - convicted for peacefully expressing his opinion and he faced an unfair trial that seemed destined to ensure that he remained in prison. He should be immediately and unconditionally released.”

Maina Kiai, the United Nations special rapporteur on the rights to freedom of peaceful assembly and of association, visited Oman in September 2014 at the invitation of the Oman government, the first Arab country to do so. Kiai sat with many people, both men and women, who had contacted him and expressed their willingness to meet with him.

“Unfortunately, I was not permitted to meet with the Mr al Maamari, a member of the Shura Council who is currently serving a prison sentence after being convicted of convening an illegal gathering,” Kiai wrote in a statement following his visit. “From my meetings with civil society, victims and activists, I got the distinct impression of a pervasive culture of silence and fear affecting anyone who wants to speak and work for reforms in Oman. They are afraid to speak their minds, afraid to speak on the telephone, afraid to meet.”

“I urge the government to ensure the safety of all these individuals and that they will not be subjected to any form of reprisals - including threats, harassment, punishment or judicial proceedings, as required by Human Rights Council Resolutions 24/24 and 12/2 and in the Terms of Reference for country visits by Special Procedures of the Council.”

Kiai’s full report will be officially presented in the 29th session of Human Rights Council in June 2015.

A low threshold for criticism

Oman was swept up in anti-government protests during the Arab uprisings in 2011, which quickly led Sultan Qaboos to reshuffle his government and allocate a bigger role to the consultative assembly. The protests in 2011 have set the sultanate in an atmosphere that is increasingly intolerant of peaceful demonstrations, where activists and lawyers are reluctant to speak about governmental reform for fear of being arrested or monitored.

Yet prominent activists, such as blogger Saeed Jadad - who led protests in the southern region of Dhofar in 2011 and called for government reform - have been arrested numerous times, the most recent being on 21 January of this year. Jadad, who has heart problems, was admitted to the hospital two days later after he announced a hunger strike.

Michael Forst, the Special Rapporteur on the situation of human rights defenders, stated that “Mr Jadad’s recurring detention is unacceptable as it seems to be an act of reprisal for cooperating with international organisations.”

Protests continued throughout 2012, and arrests of activists became more commonplace. The authorities justified their actions, pointing to the detrimental effect dissidents will have on the country’s national security. A statement was released in the summer of that year by the General Prosecution, stating that it will crack down against “anyone who incites [the public through] disrespectful writings or speech, as well as against anyone who helps support such crimes.”

“Such acts are contrary to public order and morals,” the statement continued, “and they are legally criminalized regardless of how they are committed - whether they are visible, read or heard - and regardless of what means of communication and information technology is used, including electronic forums and social networking sites.”

Nabhan Alhanshi, the executive manager of the Human Rights Monitor group in Oman, confirmed that the government has a low threshold for criticism.

“You can criticise certain ministers or ministries but you cannot criticise Qaboos [the sultan], anything related to him, or the internal security service,” he said. “Qaboos controls everything in the country: he is the king, the prime minister and he is protected by the constitution which he himself drafted.”

Alhanshi points out the autocratic measures introduced in 2011, bolstering the penal code.

“Article 135 of the Penal Code is about undermining the prestige of the state,” he explained. “This is the article which is most frequently used against political writers and bloggers. Article 137 [stipulates] that anyone who is involved in a protest will be arrested and put in prison for a month up to a year.”

“A lot of activists now remain silent or have stopped being critical of the government,” he said. 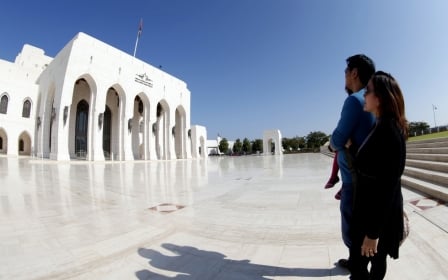