A Pakistani human rights lawyer was killed by gunmen Saturday night following a Facebook post in support of the election of London Mayor Sadiq Khan.

Khurram Zaki edited the blog Let Us Build Pakistan (LUBP), which claimed to “spread liberal religious views and condemned extremism in all forms”.

Four men riding on two motorcycles opened fire on Zaki while he was eating dinner outside a diner in Karachi.

Zaki was killed while two others, journalist Rao Khalid and a bystander, were critically wounded in the attack.

Qari Saifullah, a purported spokesman for the Hakimullah group of the Tehreek-i-Taliban, said in a statement Sunday that Zaki had been targeted for criticizing a prominent Islamabad cleric, Mullah Abdul Aziz.

On the evening of his death, Zaki had posted an update on the election of Sadiq Khan, who became the first Muslim mayor of London on Friday, praising the benefits of “Western Secular Democracy”:

Zaki had been heavily involved in campaigning against sectarian violence in Pakistan, which has seen thousands of Shia, Ahamdis and Christians killed by militants groups such as the Tehreek-i-Taliban.

Aziz, who preaches at the Red Mosque in Islamabad, has been a major target of activists like Zaki due to his incitement against religious minorities. Aziz has also publicly supported the Islamic State group.

Prior to his death, Zaki had successfully launched a complaint against Aziz under anti-terrorism laws.

According to the Hindustan Times, a “request was made to lodge and register an FIR against Molvi Aziz under ATA (Anti-Terrorism Act), including sections 6 and 8 and PPA (Protection of Pakistan Act) (Scheduled Offence II) and other appropriate sections of CrPC and other relevant laws and arrest him accordingly.”

Politicians within the Pakistani government have been seen as defending Aziz, including the interior minister Chaudhry Nisar Ali Khan, who has previously said there was "no reason" to arrest the cleric.

The victory of Sadiq Khan, the son of Pakistani immigrants, in the London mayoral elections produced a mixed reaction in Pakistan.

Congratulations to Sadiq Khan on becoming Mayor of London.

It was only a matter of time for first bigots to appear and use #Khan's victory as way to express hatred for #Jews. pic.twitter.com/avWuNmXzgA 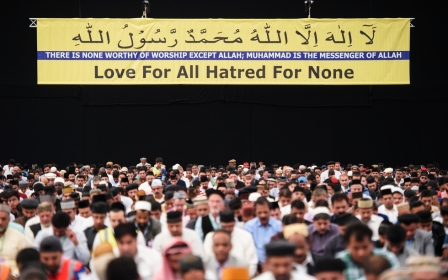